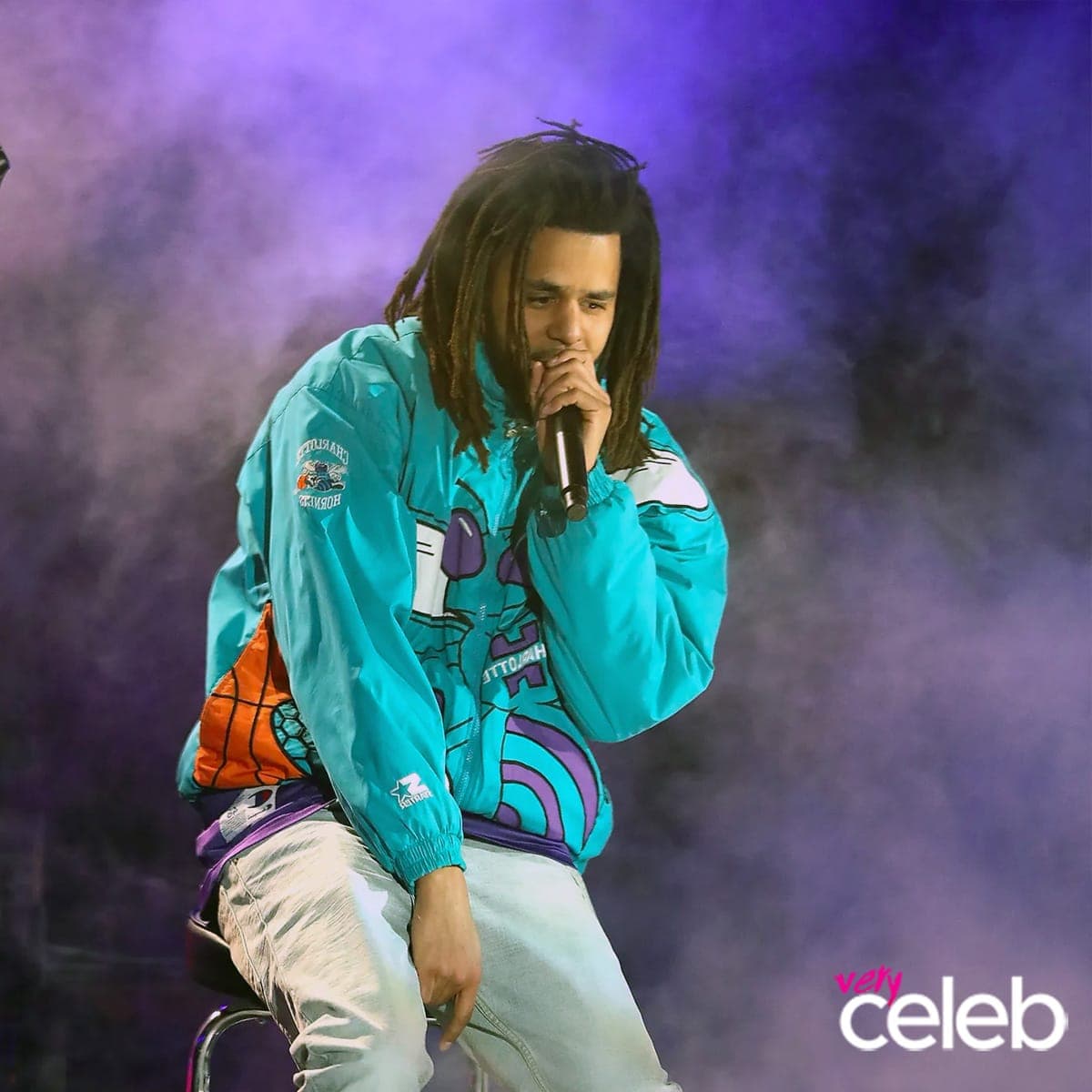 Famous for his unique style of rapping and singing, J. Cole spawned a new generation of rap artistry. His unique style of rapping involves a lot of play on metaphors, rhymes, and quotes that have led many people to compare and contrast him with Kendrick Lamar who happens to be his contemporary. Many rap fans adore J. Cole for his album 4YEO, one of the most highly streamed rap albums. Per month, in Spotify alone, in a month, over 24 million people stream his music. Millions of people love J.Cole for the kind of storytelling embodied in his songs. The metaphors he magnificently creates to deliver political themes and the hardships that black Americans face have allowed him to capture a unique market.

Another thing that is superbly unique about J.Cole is that he was not only rapping as he was also balling at one point in his career. He actually earned a college scholarship at St. John’s University. J.Cole was a stellar player at the Terry Sanford High School. Because of the stardom that J.Cole has amassed, he was able to undertake a sponsorship deal with the Puma brand, eventually releasing his own signature shoe in the summer of 2020. Skies the limit for this unique individual talent. Let us take a look at some of his famous quotes that have guided him through his life and stardom.

1. “Anything’s possible, you gotta dream like you never seen obstacles.” 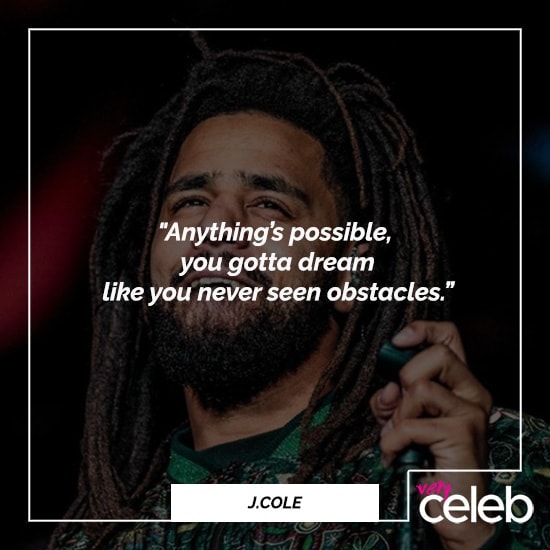 2. “Either you play the game or let the game play you and be that broke sucka talkin bout I stayed true.”
3. “I put a lot of pressure on myself. I think something’s not good enough, and I won’t stop until I feel like I’ve made it. I’m never satisfied.”
4. “If I was to go to sleep before midnight, I would feel weird about myself, like I wasted a day. My most productive hours are between midnight and five.”
5. ”If you ain’t aim too high, then you aim too low!” 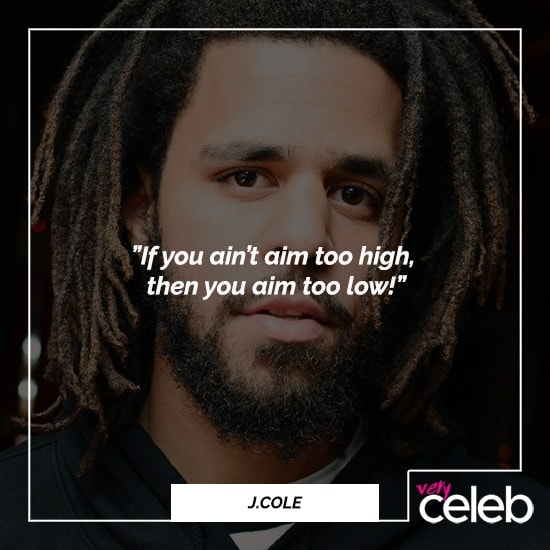 6. “My fans love me for me, my beats, my rhymes.”
7. “Life is all about the evolution.”
8. “You are perfect exactly as you are. With all your flaws and problems, there’s no need to change anything. All you need to change is the thought that you aren’t good enough.”
9. “To appreciate the sun, you gotta know what rain is.” 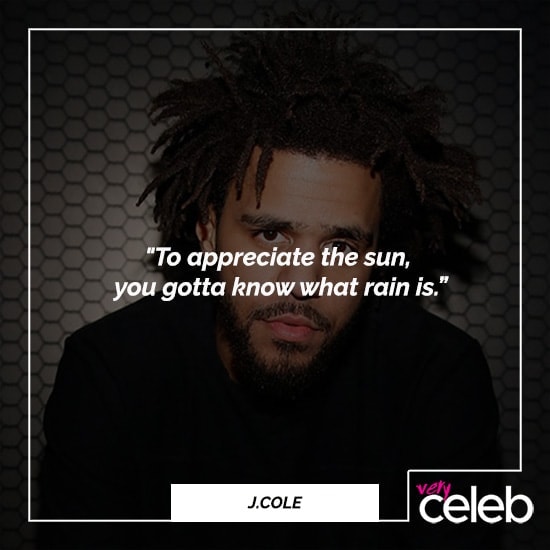 10. “You can’t reverse fame. You can lose all the money, but you’ll never lose people knowing you.”
11. “I’d rather be happy being myself than sad trying to please everyone else.”
12. “If you place your importance on appreciation and love, that’s enough.”
13. “I feel like this: Whatever is in your path and in your heart, you need to do.”
14. “As much as it might look like, to someone else, that I’m successful, I never feel like I’m anywhere. The further I go, I still feel equally further from my eventual goal. Because as I grow, I get more goals. I’m never content.”
15. “Anything I do, I want to do it well.” 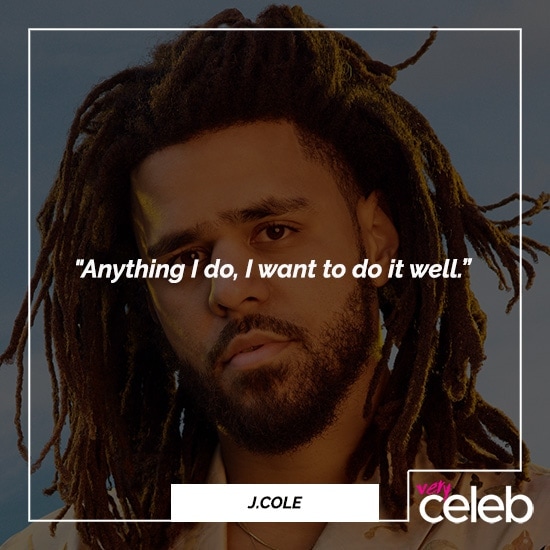 16. “I keep my head high, I got my wings to carry me. I don’t know freedom, I want my dreams to rescue me.”
17. “In a game full of liars it turns out that I’m the truth. Some say that rap’s alive. It turns out that I’m the proof.”
18. “The music becomes more pure and soulful when it’s true, and it has to be true these days with the way the internet works, and the way the game works, everyone wants authentic raps.”
19. “You have to hurt in order to know. Fall in order to grow. Lose in order to gain. Because most of life’s lessons are learned in pain.”
20. “Hard to move on when you always regret one.” 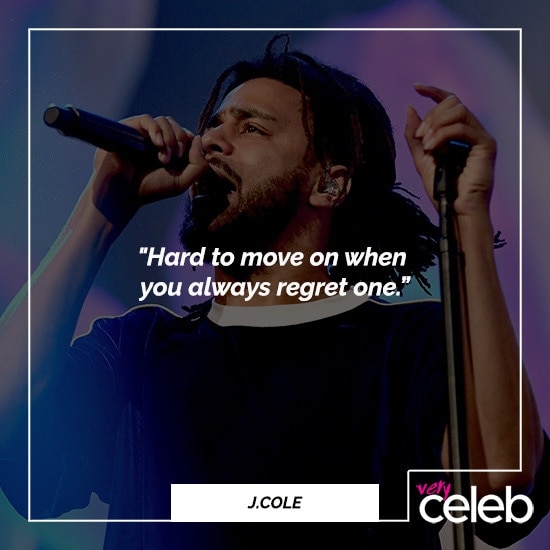 21. “I’m here to spread a message of hope. Follow your heart. Don’t follow what you’ve been told you’re supposed to do.”
22. “Never give up until you’ve given out all your very best. It’s better to fail trying, than wondering what could have happened if you tried.”
23. “People think because I’ve got some success, I’ve made it, but in my eyes, it’s like, ‘How long has Jay Z been in the business? How many albums has he got?’ Not that I’m trying to be Jay Z, but I am trying to be around for a long time.”
24. “The same ones you love will bring you pain.” 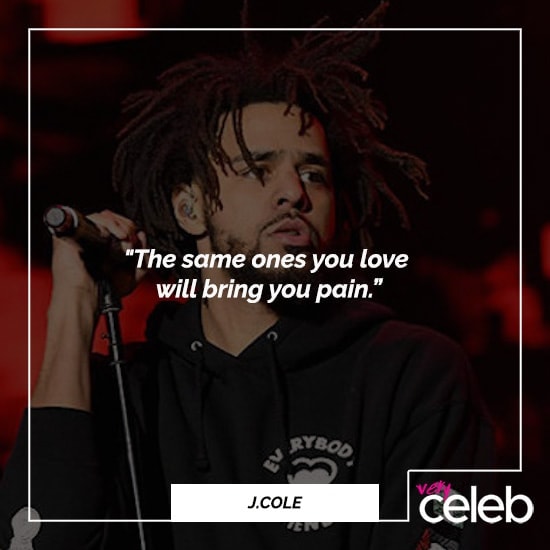 25. “One day, I’ll be listening to a bunch of Ray Charles, the next day it’s nothing but Red Hot Chili Peppers. The next day it might be Tupac all day.”
26. “The thing about being an artist today is you get to develop right in front of people’s eyes before you even put out an album.”
27. “I’m not gonna be bad at anything, and I want to actually be the best at anything I’m doing. So if I’m playing basketball, if I’m taking the SATs, like, there’s a competitive spirit behind it. With production, it’s the same thing.”
28. “I always feel like it’s two key ingredients when it comes to following your dreams, making something happen that the average person deems difficult. If you truly believe it, that’s step one. Step two, is, you know, the hard work that goes along with it.”
29. “A little jealousy in a relationship is healthy. It’s always nice to know someone is afraid to lose you.”
30. “Don’t let bridges you cross be bridges you burn.” 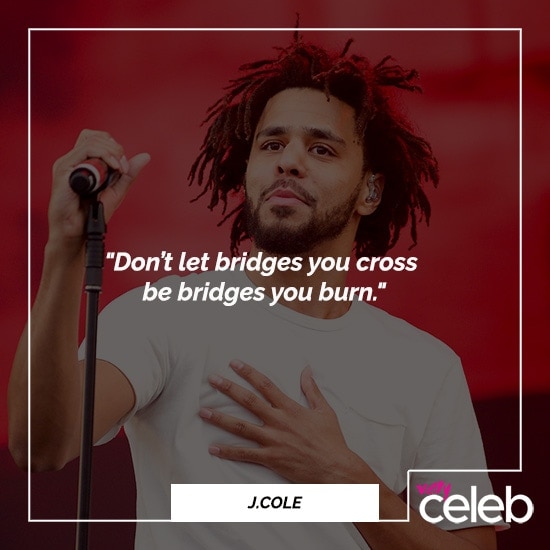 31. “I don’t like to think of it as being fired. Instead, I prefer to think of it as being on indefinite leave with a sabbatical flair.”
32. “I’m the same kid who used to hop the trains with headphones and just go to downtown Manhattan, walk around and listen to music or walk through the city. The fame restricts that. It’s a small complaint in comparison to the benefits I get from it, but the restrictive part is what I don’t like – and the fact that it’s not reversible.”
33. “They don’t know where I came from, but they know where I’m going.”
34. “It’s beauty in the struggle, ugliness in the success.” 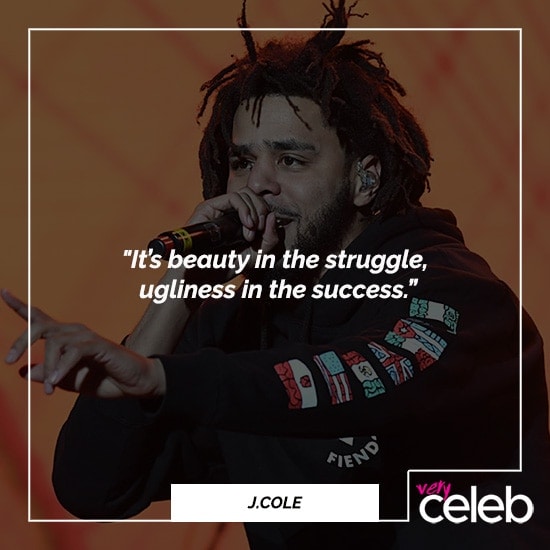 35. “One thing you should know about me is I never play to lose. Always aim high and rarely obey the rules.”
36. “There’s always people out there that’s like, doubting me, you know what I mean? Even though I do embrace the people that embrace me and I’m grateful for them. But I always feel like, man, there’s still people out there that’s not giving it up. And I feel like I’m doing everything the right way, you know what I mean? I’m really going out of my way to do it the right way. I’m taking very few cheats – very few cheat codes that I’m using.”
37. “You keep falling victim ‘cause you’re insecure, and when I tell you you’re beautiful you can’t be sure.”
38. “My life accelerated, but had to wait my turn. But then I redecorated, that means my tables turn.”
39. “I struggled with being a broke college graduate, and while all my friends were getting career jobs, I was working horrible part-time jobs. That’s why now, even when I get tired, I think, ‘This is what I asked for.”
40. “We got dreams and we got the right to chase ’em.” 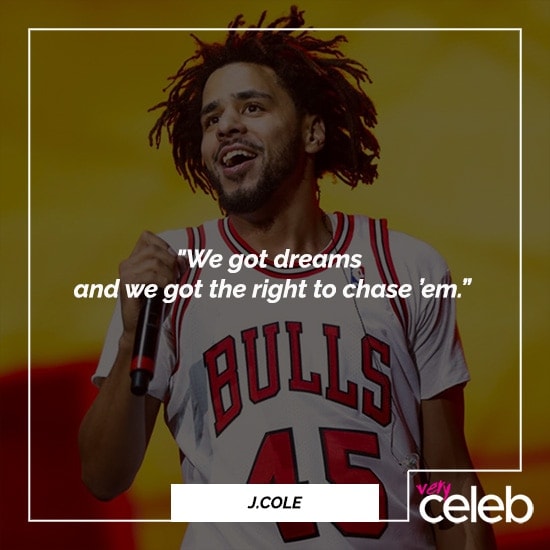 41. “As we grow up, we realize it becomes less important to have a ton of friends & more important to have real ones.”
42. “Follow your heart. Don’t follow what you’ve been told you’re supposed to do.”
43. “I just feel like, with rappers, there’s so much complacency. It’s like, ‘Oh, I’m a rapper. I’m successful. I make money. That’s all that matters.’ But there’s a lot of stuff going on in the world. Whether or not you’re aware of it, it’s happening.”
44. “Don’t let them taint your soul.” 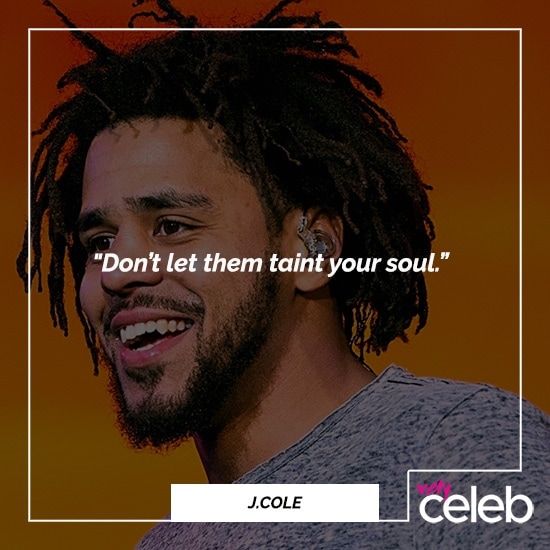 45. “College isn’t in everyone’s hearts. I am living proof, though, that school doesn’t mess up your plans. It gives you more experiences to write about.”
46. “I know I’m blessed because yo’ stress is realer than anything I done been through.”
47. “I walk along this long harbor of life and sit on the piers, reflect on my pain and sh*t on my fears.”
48. “In this life ain’t no happy endings. Only pure beginnings followed by years of sinning and fake repentance.”
49. “No such thing as life that’s better than yours.” 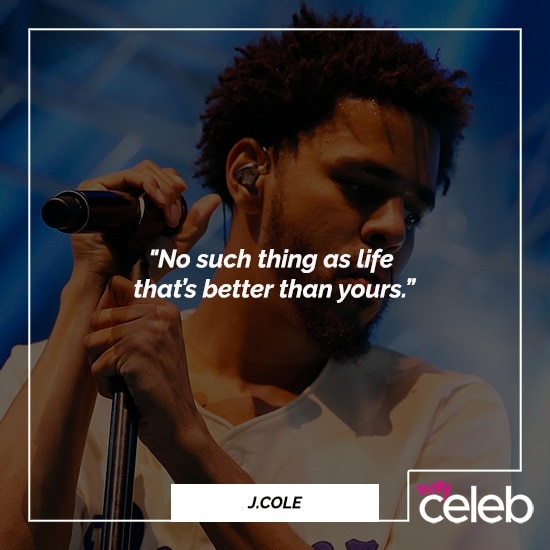 50. “Life can bring much pain. There are many ways to deal with this pain. Choose wisely.”
51. “People congratulate me. I just tell them God is good.”
52. “Every loser gotta win and every winner gotta lose someday.”
53. “I had a lot of resistance, and not just to fame. I was always conscious of not changing.”
54. “Life is a movie, pick your own role, Climb your own ladder or you dig your own hole.”
55. “Time will tell who is on my side.” 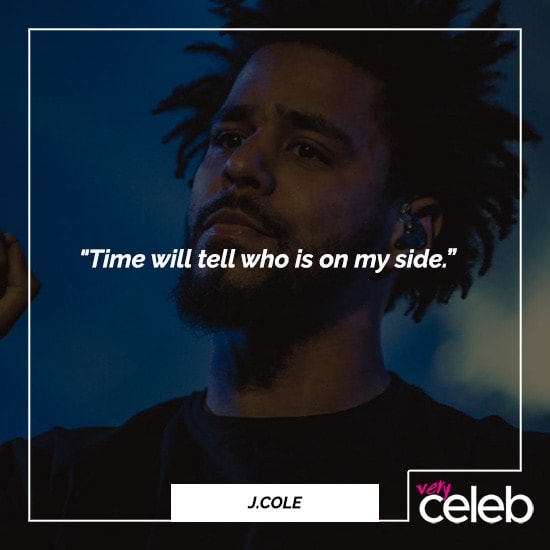 56. “They say time is money but really, it’s not. If we ever go broke, time is all we got.”
57. “Take a chance, because you never know how perfect something can turn out.”
58. “I’mma be here for a while. None of these clowns can hurt me.”
59. “I want people to follow their dreams, yes… but I’m not interested in telling young black kids how to be rappers… I want to show them that there are so many other paths you can take, besides a rapper or basketball player.”
60. “Nothing lasts forever, but at least we’ve got these memories.” 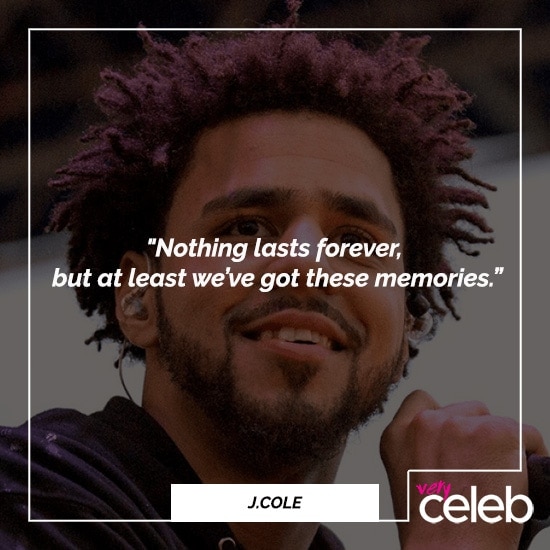