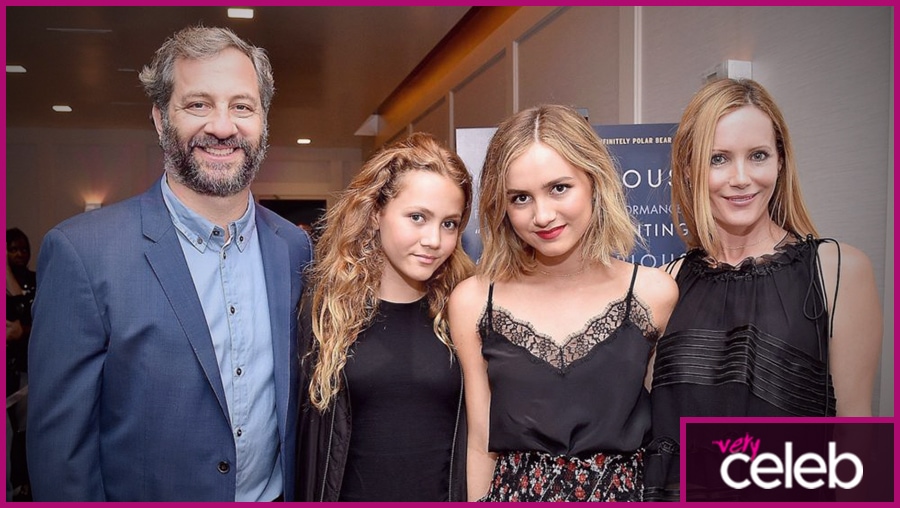 Maude Apatow and Iris Apatow are the daughters of Judd Apatow and Leslie Mann.

Judd Mann Apatow is a highly acclaimed producer, film director, and screenwriter. He is also a well-known comedian and has founded the production company, Apatow Productions. Some of the comedy movies produced under his helm include Knocked Up, The 40-Year-Old Virgin, and Trainwreck.

Judd met the American actress Leslie Mann in 1996. He was producing The Cable Guy, and Leslie was one of the cast. One year later, on June 9, 1997, they got married in Los Angeles.

Two daughters were born from that union and they were Maude Apatow and Iris Apatow.

Maude Apatow is the eldest daughter of Judd Apatow and Leslie Mann.

She is an actress, known for her role in Euphoria, an HBO drama that started in 2019.

Her first on-screen appearance is in 2007 in the film, Knocked Up, a film her father produced. She followed that up with roles in the movies, Funny People and This is 40, both of which were also produced by her dad and released in 2009 and 2012 respectively. In these movies, she played daughter roles to her mother’s characters.

After that, Maude starred in other films, including Other People, The House of Tomorrow, Assassination Nation, and The King of Staten Island.

She is also in the 2020 Netflix miniseries, Hollywood.

Judd with a very young Maude

Iris Apatow is the second (and youngest) daughter of Judd Apatow and Leslie Mann.

Following the footsteps of her mom and older sister, Iris also pursues acting. Although her film and television record isn’t that long yet, she is slowly but surely building up her filmography.

Her most well-known role so far is the character of Arya in the Netflix series Love. She also appeared in the movies produced by her father, Knocked Up and This is 40.

Who made comments on Judd Apatow’s wife and daughter?

As a family that constantly appears in the limelight, there are numerous comments out there from all kinds of people about Judd Apatow’s wife and daughters.

One of the most common ones is about Leslie Mann’s and their daughters’ continuous appearances in Judd Apatow’s films. Some people are annoyed at these acts of apparent nepotism, while others welcome it.

In 2018, Leslie Mann mentioned in an interview that she “got into trouble” for supporting her daughter Maude’s decision to leave college prematurely. She has easily weathered this though by saying that no matter what, she’ll be there for her daughter, whether Maude wanted to continue schooling or work in the film industry full time.

The most recent round of news points to the exchange of comments between mom Leslie and daughter Iris on Instagram. Iris posted a photo with sister Maude and Leslie offhandedly commented that her under-eye concealer was too much. Iris’s clap back was that a text would have been better!

In other news, Judd has made comments that disagreements with his wife have made their marriage stronger and better.

No matter the case, this family seems to be getting along just fine these days and each is looking forward to their next projects.

How old are Judd Apatow’s daughters?

Who is Jeanine Pirro’s daughter? Get the Latest News on Christi Pirro, Her Career & More

Who is Carol Burnett’s Daughter? The Tragedy