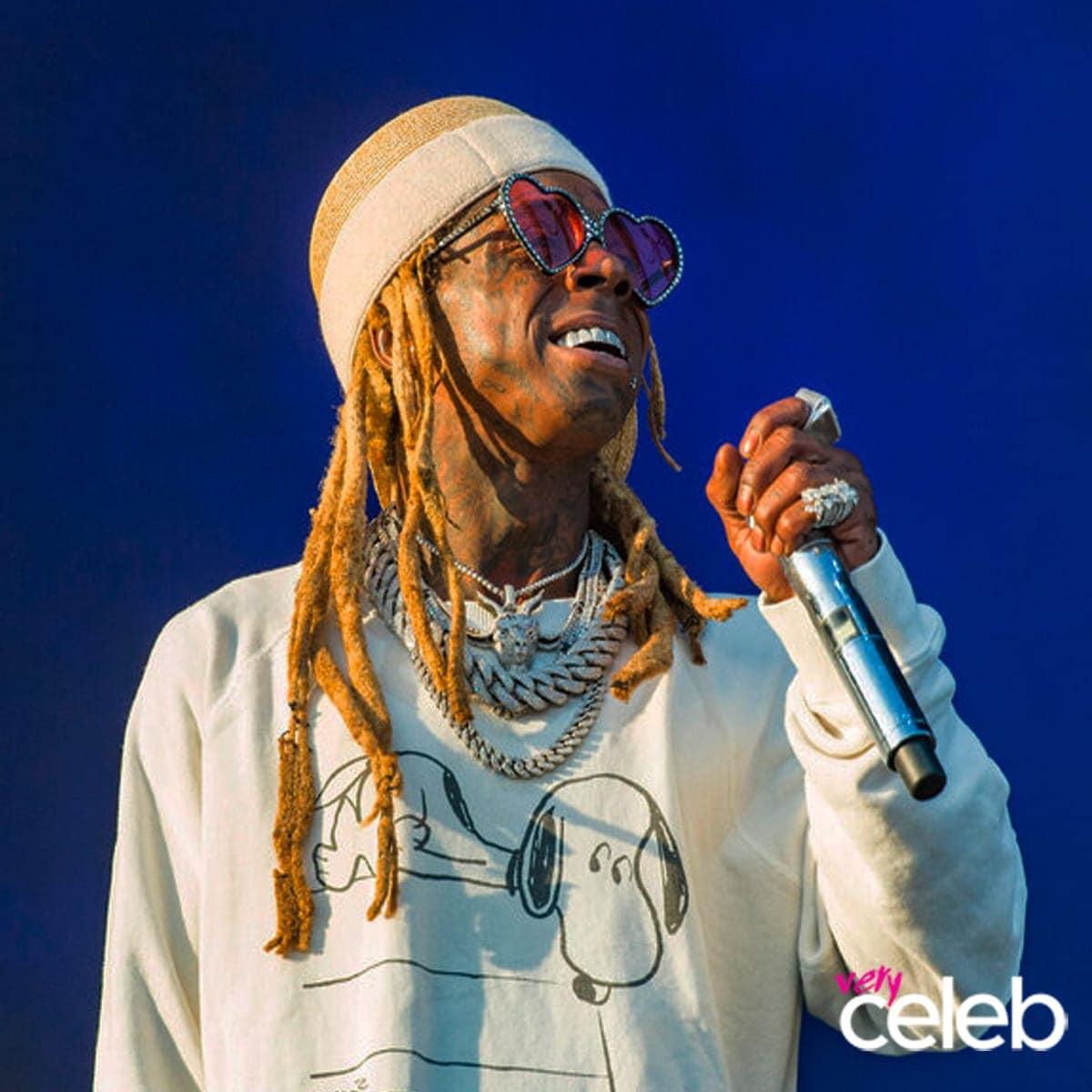 Although there have been many rappers and artists who have contributed to hip-hop music as we know it, not too many can claim that they have been as compelling and influential as Dwayne Michael Carter Jr., more famously known as Lil Wayne. It was clear that Lil Wayne was a child prodigy since he was given his first recording label at the age of 14 years old. From then on, the whole hip-hop world was mesmerized by his compelling play on words that brought him to the top of many music charts. As a testament to his greatness, by 2012, Lil Wayne overtook Elvis Presley in terms of the most Billboard Hot 100 chart hits for a solo singer.

Lil Wayne is attributed to be the master of the mixtape approach to getting music out to the listening masses. He basically understood how it is to communicate his songs and lyrics to people who were seeking evolving music and rap songs. Lil Wayne has close to 27 million monthly streams in Spotify alone. Some of his record-breaking songs include Gang Gang, Hot Wind Blows, and 6 Foot 7. He has collaborated with the best of the best including other famous artists such as Drake, Wiz Khalifa and Logic just to name a few. Let us get into the mind of one of the brightest minds in hip-hop.

1. “Everybody dies, but not everybody lives!” 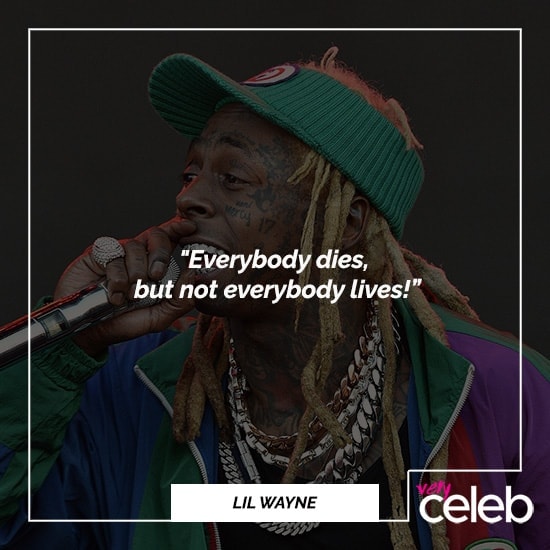 2. “A million feelings. A thousand thoughts. A hundred memories. All for one person.”
3. “I don’t look for signs. But when things happen, I say, ‘OK, something must be right.’ Or ‘OK, something must be wrong.’”
4. “I’m a lion on redeem, inspired by the green. Never tired or fatigued, never defiant to my team.”
5. ”Life goes on but the scars remain.” 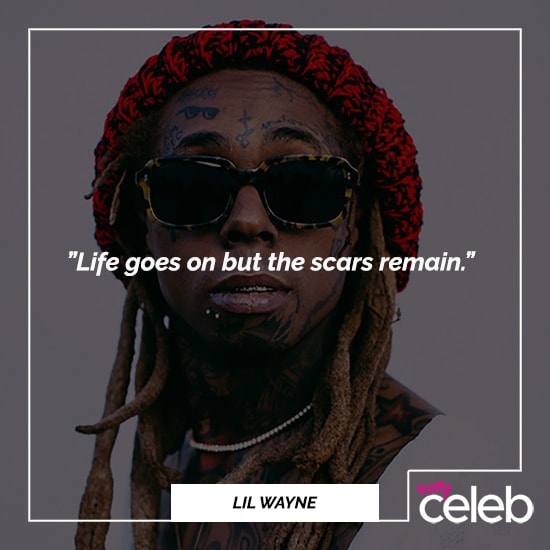 6. “Somewhere along the way in your life, the world and its people will have a problem with you. That’s their problem. Not yours.”
7. “Never apologize for what you feel. It’s like being sorry for being real.”
8. “You have to self-reflect. If you forget who you actually are, then what’s the use of even looking in the mirror.”
9. “We’re here to live. We’re here to do. We’re here to be.” 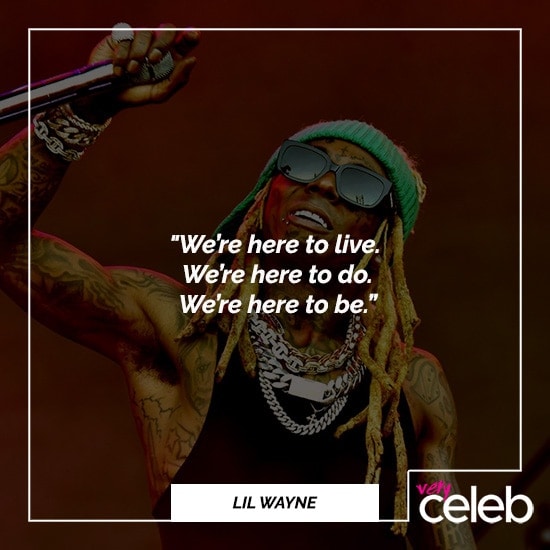 10. “The dirt under your feet could be the grave you fill. You don’t know how dead you feel ’til you’re dead for real.”
11. “I’ve been criticized for the things I chose and things I’ve chosen to do.”
12. “I hope I leave more of an impression on my kids. To be destined to have blessings to believe in, Lord.”
13. “Everybody knows, I don’t do no promoting. I don’t ever have to promote nothing—that’s the beauty of Lil Wayne.”
14. “Don’t judge me. You wanna judge me, put on a black gown and get a gavel. Get in line with the rest of them that’s about to judge me. I got court dates every other month. It’s me against the world, that’s how I feel.”
15. “Be good, or be good at it.” 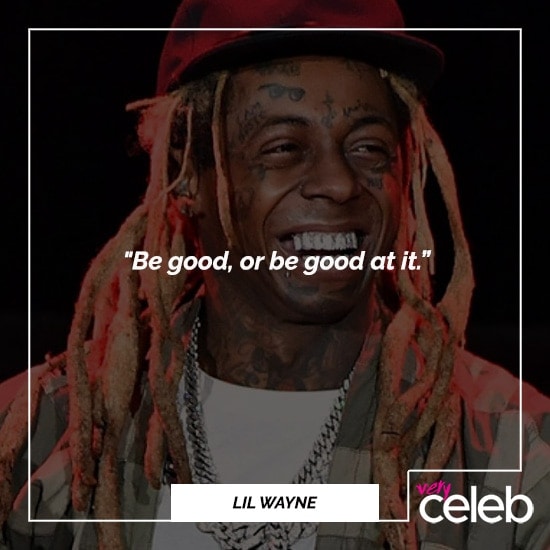 16. “God can judge me, I don’t need a jury. Nothing standing in my way, like nothing’s my security.”
17. “Hip-hop ain’t dead, it just had a heart attack.”
18. “I believe music should reflect yourself in some way and not just yourself at the given time. I feel that when you die or when you’re going, someone’s supposed to listen to that music and know everything about you. And I just try to get that across.”
19. “Jail didn’t make me find God, He’s always been there. They can lock me up, but my spirit and my love can never be confined to prison walls.”
20. “Keep your mouth closed, and let your eyes listen.” 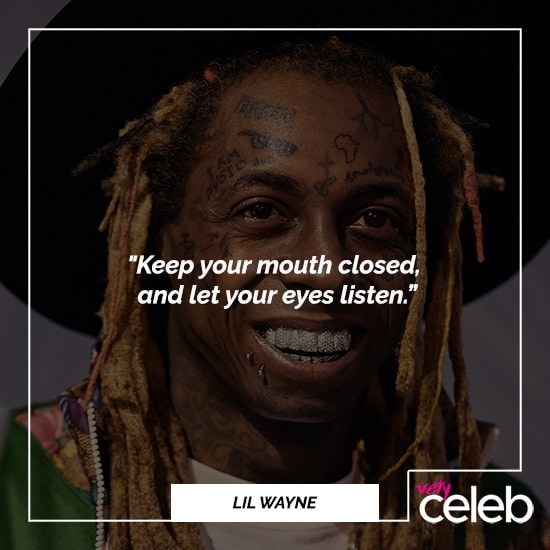 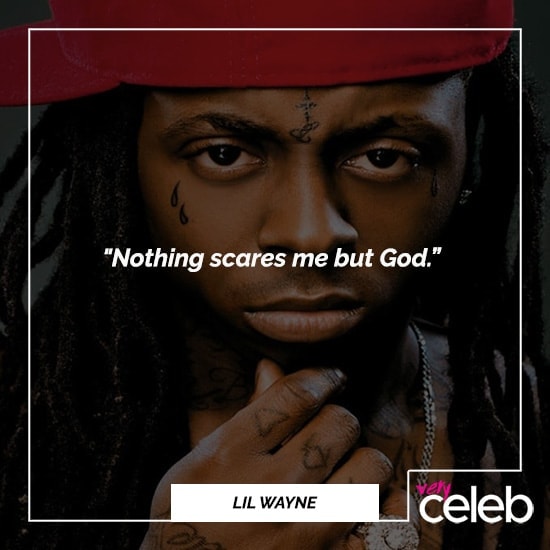 25. “The more time you spend contemplating what you should have done, you lose valuable time planning what you can and will do.”
26. “What goes around comes around like a hool-a-hoop.”
27. “You are supposed to be able to do anything in this world. That’s what Martin Luther King told me.”
28. “I don’t want to be understood because if people understand me, they get tired of me.”
29. “I always believe that to be the best, you have to smell like the best, dress like the best, act like the best. When you throw your trash in the garbage can, it has to be better than anybody else who ever threw trash in the garbage can.”
30. “Everything gets better with time, and time is forever.” 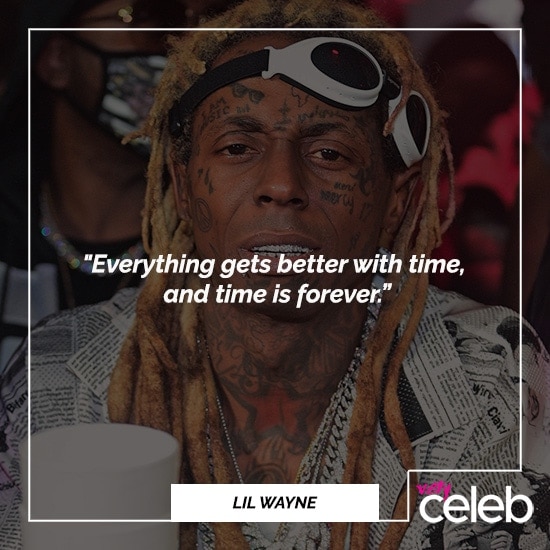 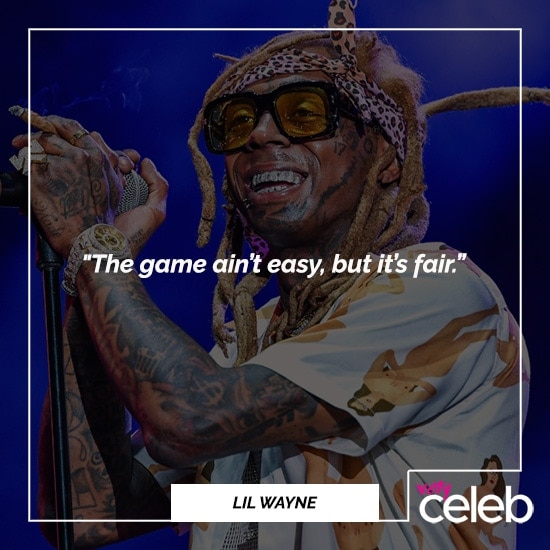 35. “Throw dirt on my name, and I still come out clean.”
36. “Never back down from a real challenge. They give the best lessons in life. “
37. “Things I say have value and I would love for you to value them, however you get it.”
38. “I’m on the road to riches, it’s just a lil traffic.”
39. “I just always expect the best because I’m a competitor and if I’m competing, then obviously I’m trying to be better in everything.”
40. “I don’t need it to be easy. I just want it to be worth it.” 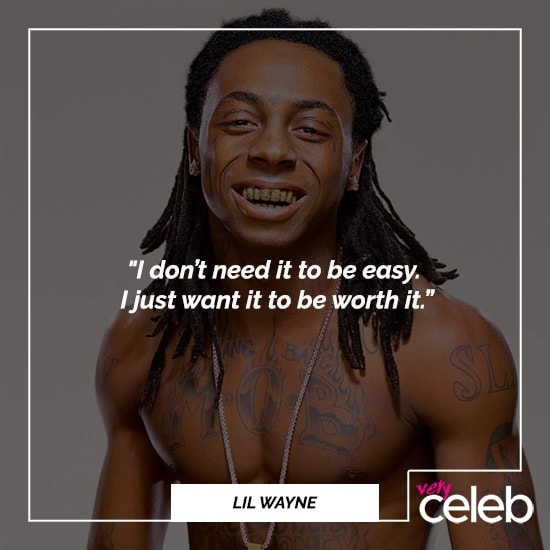 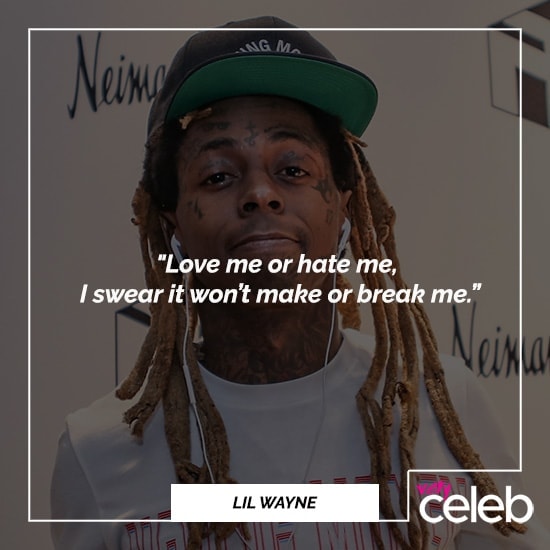 45. “I’m blessed and I thank God every day for everything that happens for me.”
46. “I don’t think life is about a pace—living slow or fast. I think you just live.”
47. “Don’t make an opinion on me if you don’t know nothin’ about me.”
48. “Honestly, I don’t listen to anybody else’s music but my own. It’s kind of like sports to me. You don’t see Kobe Bryant at a LeBron James game, he just works on his own game. And that’s what I do. I only listen to myself, so I can criticize and analyze all those things.”
49. “Blind eyes could look at me and see the truth.” 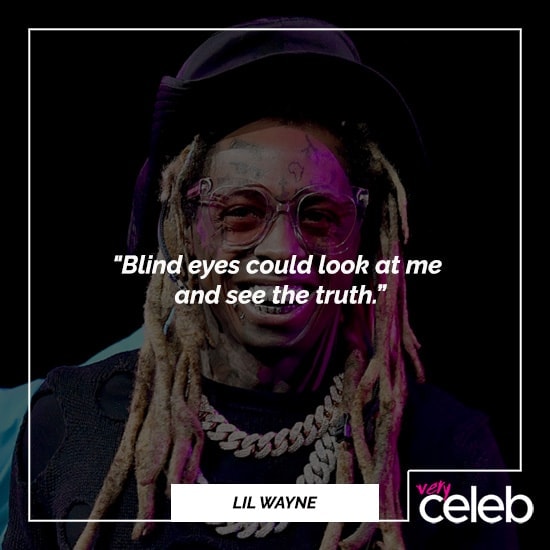 50. “A blessing in disguise is right before our eyes. But since it’s a disguise, we do not know that it’s there.”
51. “Had to swallow my pride, though, swear it tastes like spearmint.”
52. “I am probably in the sky, flying with the fish, or maybe in the ocean, swimming with the pigeons. See, my world is different.”
53. “I know it’s an experience that I need to have if God’s putting me through it.”
54. “I’m looking for the right woman to give my last name.”
55. “Just remember that when nobody else was there for you, I was. And when nobody else gave a damn, I did.”
56. “They say love is the key. Somebody change the lock.”
57. “There’s strength in numbers but there’s honor over strength.”
58. “They paint me as a villain, I just autograph the artwork.” 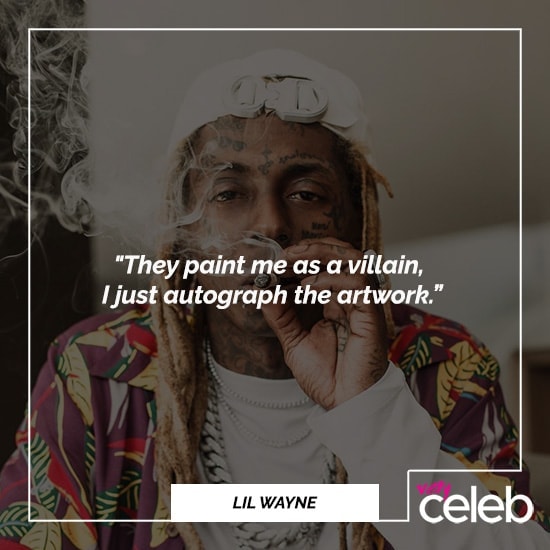 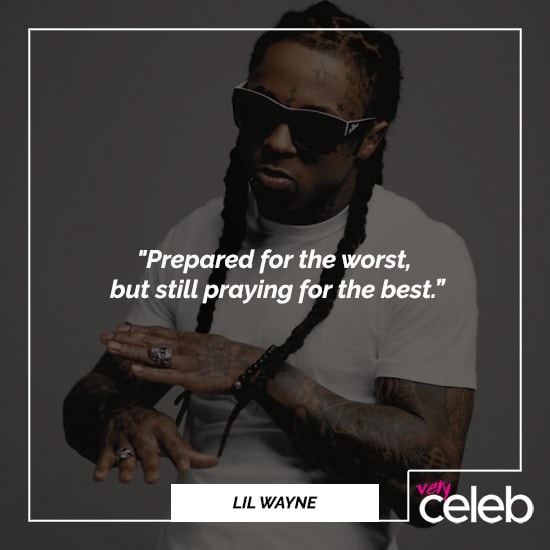 65. “I am very humble, and I am very gracious and very grateful for everything that happens to me and about me and around me.”
66. “I like people that enjoy life, ’cause I do the same.”
67. “If a girl understands your BS, sticks with you through your mistakes, smiles even when you’ve done nothing for her, it’s obvious she’s a keeper.”
68. “Life’s a beach and I am just playing in the sand!”
69. “You can’t get on my level. You gon’ need a space shuttle or a ladder; that’s forever.”
70. “You’re either living or you’re dead.” 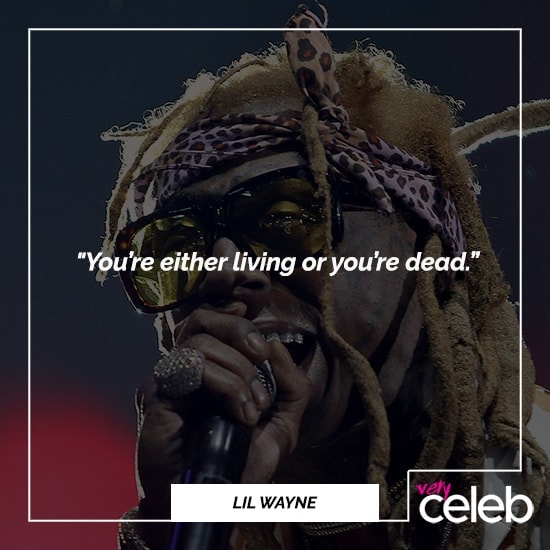 55 Ray Lewis Quotes to Unleash the Athlete in You