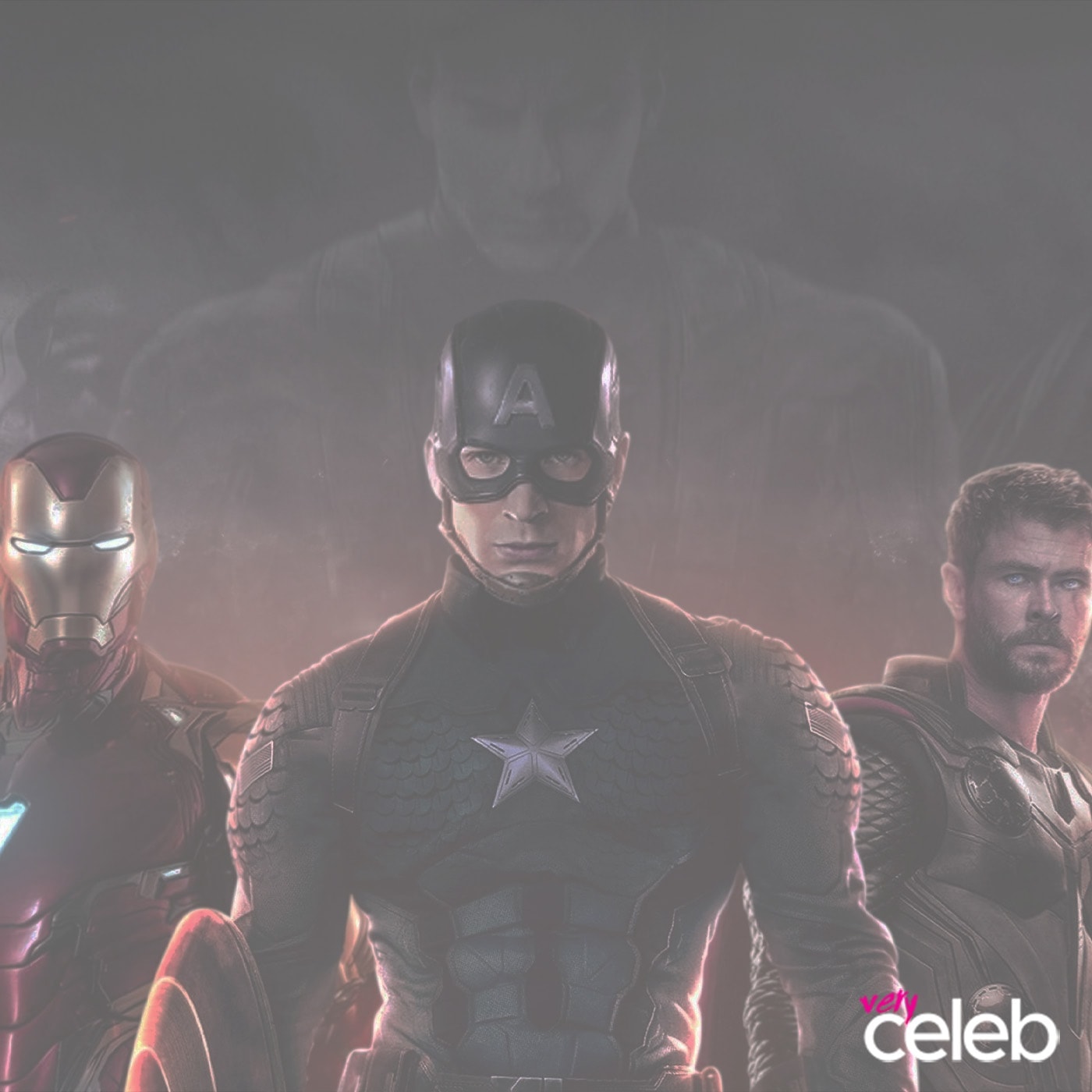 Superheroes have always captured the minds, hearts, and imaginations of people. Who would not be drawn toward the immense strength and characters of these superheroes, especially in time of great conflict and strife. They have been the subjects of many great stories around the world. From ancient superheroes such as Beowulf, the ancient king and superhero of early English literature, superheroes have been bred and have stayed in the consciousness of people. We have put them in a pedastal as in idealization of the perfect specimen of human beings, no matter how flawed they could be at times.

From characters, Greek, ancient, or whatnot such as Perseus for instance, we have come to love the success and folly of these superheroes. Superheroes have also been the subject of comic books, graphic novels, mangas, and many more that have captured not just the fascination of kids but also of adults as well. We can never get enough of these superheroes as they speak to us and quell us of our need for not just salvation but for idolatry as well. Without ado, here are top 80 superhero quotes. 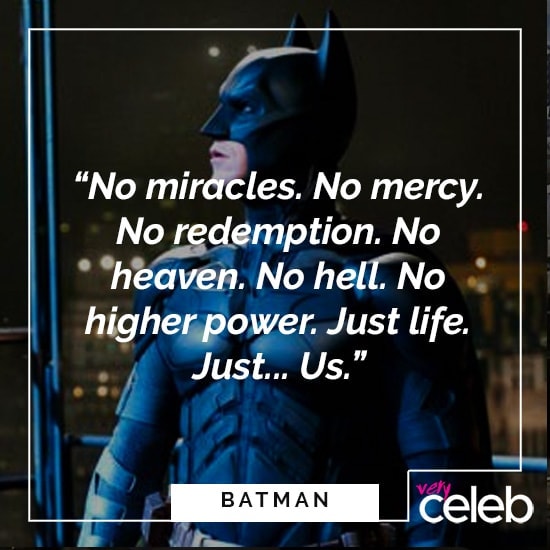 2. “Criminals, by nature, are a cowardly and superstitious Lot.” – Batman
3. “It’s not who I am underneath, but what I do that defines me. ” – Bruce Wayne/Batman
4. “You’re much stronger than you think you are. Trust me.” – Superman
5. “Do good to others and every man can be a Superman.” – Superman
6. “The ‘amazing’ can only be created by facing fear, risk, and failure during the process.” – Superman 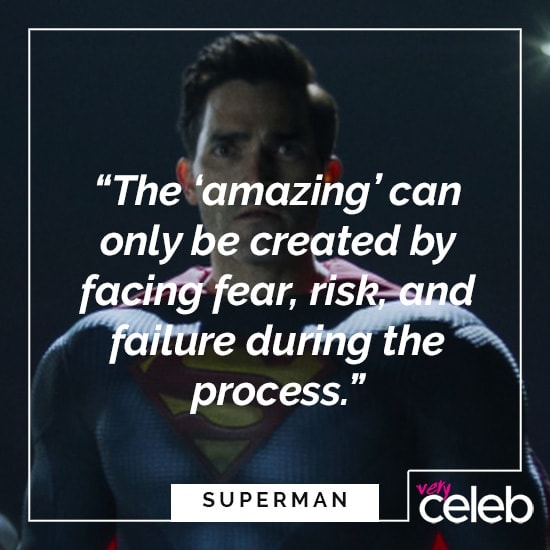 7. “I’m the best there is at what I do, but what I do best isn’t very nice.” – Wolverine
8. “Fill your heart with better memories. Better actions. Better friends.” – Wolverine
9. “The pain lets you know you’re still alive.” – Wolverine
10. ““United? Unity isn’t about being the same. It’s about working together. What you can’t calculate, Ultron, is that our differences are our greatest strength.” – Ironman
11. “Sometimes you’ve gotta run before you can walk.” – Ironman
12. “I love you 3000.” – Ironman
13. “Superheroes were born in the minds of people desperate to be rescued.” ― Jodi Picoult
14. “When an individual acquires great power, the use or misuse of that power is everything.” – Professor X 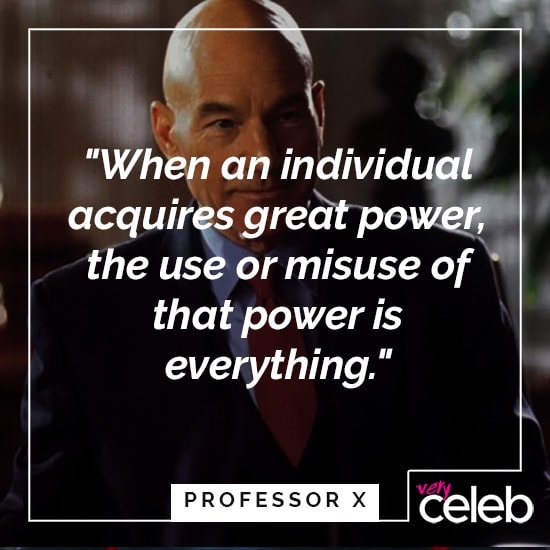 15. “Just because someone stumbles and loses their way doesn’t mean they’re lost forever.” – Professor X
16. “You know, Logan … This is what life looks like. A home, people who love each other. Safe place. You should take a moment and feel it.” – Professor X
17. “I don’t like bullies; I don’t care where they’re from.” – Captain America
18. “The price of freedom is high, it always has been. And it’s a price I’m willing to pay. And if I’m the only one, then so be it. But I’m willing to bet I’m not.” – Captain America
19. “This job, we try to save as many people as we can. Sometimes that doesn’t mean everybody. But if we can’t find a way to live with that, then next time maybe nobody gets saved.” – Captain America
20. “If you want to bet on something, bet on your own life!” — Mirage
21. “You can’t foresee all the consequences of your actions – But that’s no excuse to do nothing.” – Green Lantern
22. “We save as many as we can to make up for the ones we couldn’t. That’s all we do.” – Spiderman
23. “No man can win every battle, but no man should fall without a struggle.” – Spiderman 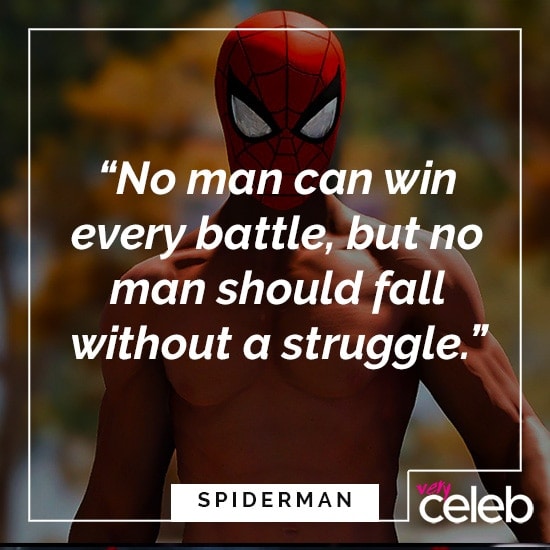 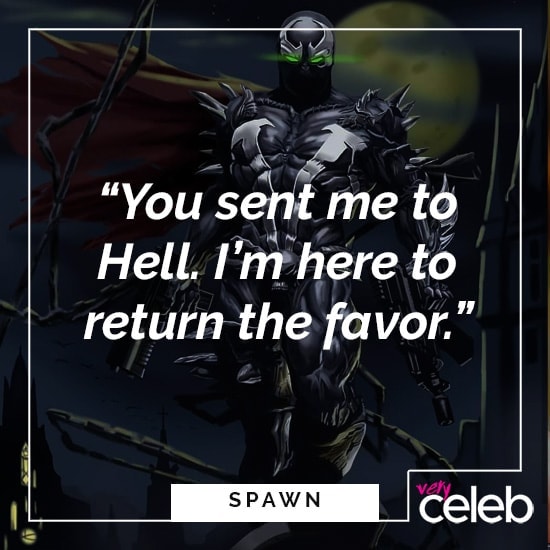 34. “The future is worth it. All the pain. All the tears. The future is worth the fight.” – Martian Manhunter
35. “The universe is so big, it has no center. We are the center.” — Ms Marvel
36. “Listen, smile, agree, and then do whatever you were gonna do anyway.” – Ironman
37. “Where you’re going, every day is Halloween.” – Spawn
38. “I am not king of all people. I am King of Wakanda. And it is my responsibility to make sure our people are safe and that vibranium does not fall into the hands of a person like you.” – Black Panther
39. “I will not abandon someone to die, when I have the means to save his life.” – Black Panther
40.“Our weapons will not be used to wage war on the world. It is not our way to be judge, jury, and executioner for people who are not our own.” – Black Panther 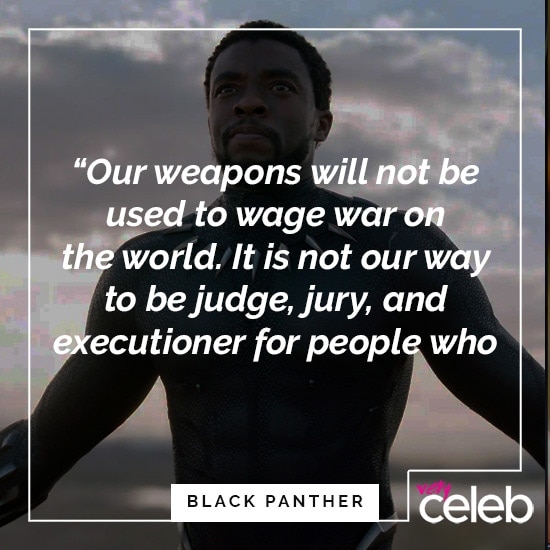 41. “Even in failure there can be Nobility! But failing to try brings only shame!” – Silver Surfer
42. “Sometimes being a brother is even better than being a superhero.” – Marc Brown
43. “No matter how many times you save the world, it always manages to get back in jeopardy again.” – Bob Parr
44. “Sometimes the truth isn’t good enough. Sometimes people have got to have their faith rewarded.” – Christian Bale
45. “You only have your thoughts and dreams ahead of you. You are someone. You mean something.” – Batman
46. “When you decide not to be afraid, you can find friends in super unexpected places.” – Ms. Marvel 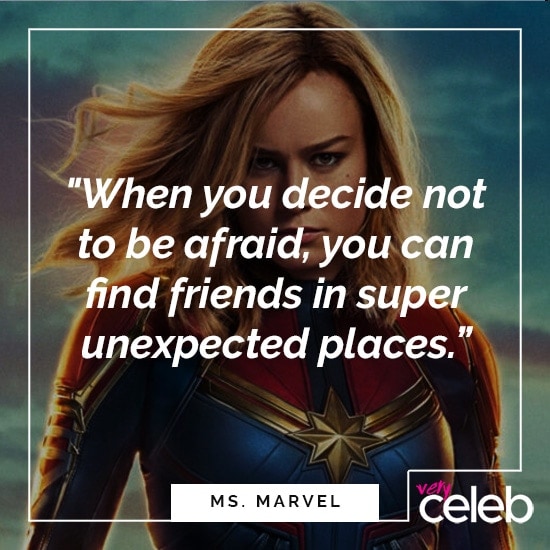 47. “Life doesn’t give us purpose. We give life purpose.” – The Flash
48. “A true hero isn’t measured by the size of his strength, but by the size of his heart.” – Zeus
49. “It took God seven days to create paradise. Let’s see if I can do better.” – Batman & Robin
50. “I’m here to fight for truth, and justice, and the American way.” – Superman
51. “Henceforth and forever — I am the Silver Surfer! To save our people, I have sworn to serve Galactus!”- Silver Surfer
52. “Others may battle with victory in sight — but the Surfer still strives when all hope is gone!” – Silver Surfer
53. “Arrogance and fear still keep you from learning the simplest and most significant lesson of all.” – Ancient One, ‘Doctor Strange’ 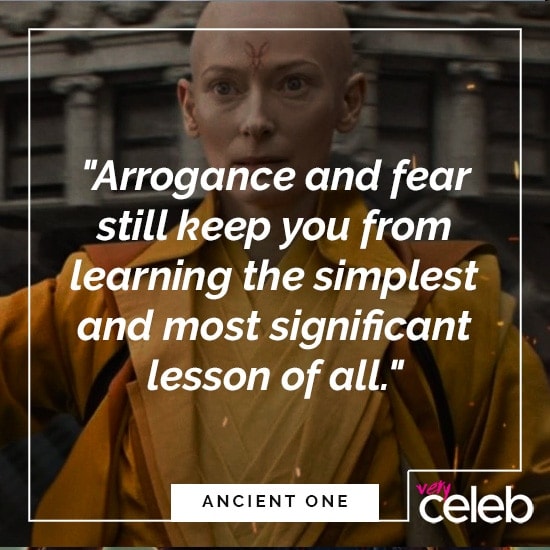 54. “There is no such thing as spirit. We are made of matter and nothing more. It’s just another tiny momentary speck within an indifferent universe.” – Dr. Stephen Strange
55. I have the power within my own body! The power to stretch — to alter my shape! The reason they call me — Mr. Fantastic!” – Mr. Fantastic
56. “Until such time as the world ends, we will act as though it intends to spin on.” – Nick Fury
57. “I think you just have to appreciate who you are and hopefully they can see what a superhero is about.” – Lucy Liu
58. “Whatever happens tomorrow you must promise me one thing. That you will stay who you are. Not a perfect soldier, but a good man.”– Captain America
59. “One of the reasons why Spider-Man is my favorite superhero is because we both undergo big changes in our lives.” – Tom Holland
60. “I’m just a puppet who can see the strings.”– Mr. Manhattan 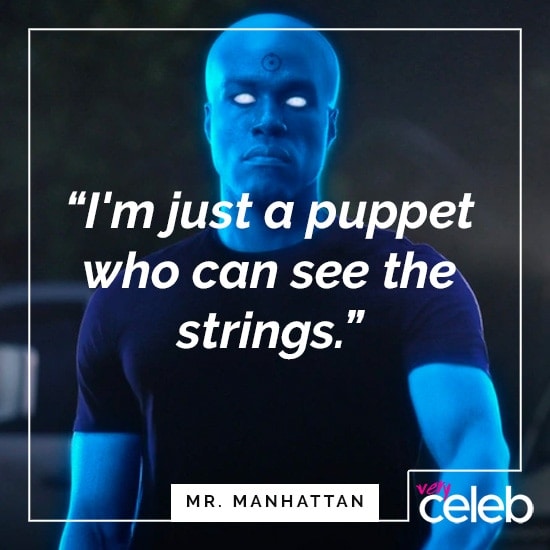 61. “I still believe in heroes.” – Nick Fury
62. “We all know the truth: But in times of crisis, the wise build bridges, while the foolish build barriers.” – Black Panther
63. “You’re ancestors called it magic, and you call it science.” – Thor
64. “This. This is what I am. This is who I am come hell or high water. If I deny it, I deny everything I’ve ever done. Everything I’ve ever fought for.” – Green Arrow
65. “The greatest power on Earth is the magnificent power we all of us possess… the power of the human brain!” – Professor X
66. “The real crime would be not to finish what we started.” – Doctor Octopus 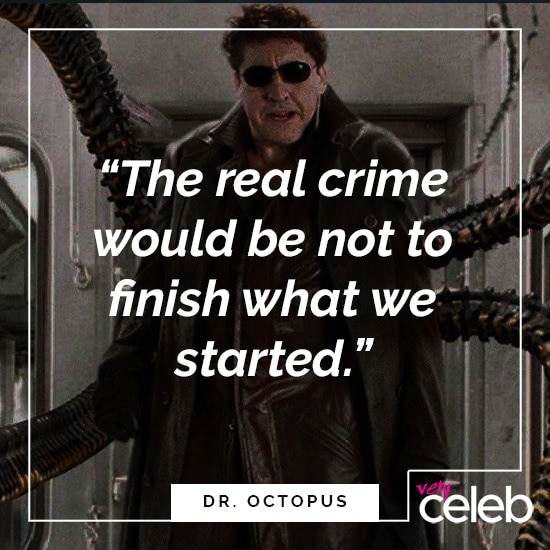 67. “I need a day when there aren’t twenty crises to deal with, but I don’t see that coming any time soon.” – Ironman
68. “‘What happens when the unstoppable force meets the immovable object?’ They surrender.” —Superman
69. “Superpowers, don’t always make you a superhero. – Duck”― Michael Grant
70. “If you cage the best, the beast will get angry.” – The Indian Feed
71. “The measure of a superhero is always his nemesis.” – David Lyons
72. “The door is more than it appears. It separates who you are from who you can be. You do not have to walk through it.” – Franklin Richards
73. “Everything doesn’t have to be about fear. There’s room in our line of work for hope, too.” – Batgirl 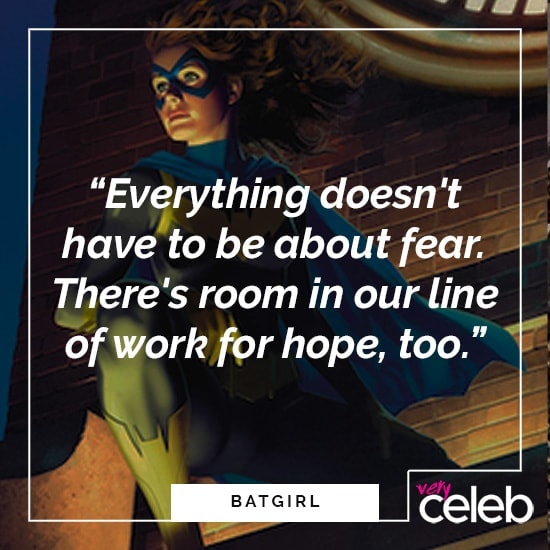 74. Why do we fall? So we can learn to pick ourselves back up.” – Batman
75. “A hero can be anyone even a man doing something as simple and reassuring as putting a coat around a little boy’s shoulder to let him know that the world hadn’t ended.” – Ben Affleck
76. “You’re going to make a difference. A lot of times it won’t be huge, it won’t be visible even. But it will matter just the same.” – James Gordon
77. “Don’t waste it. Don’t waste your life.” -Ho Yinsen, ‘Ironman’
78. “Whatever happens tomorrow, you must promise me one thing. That you will stay who you are, not a perfect soldier, but a good man.” – Dr. Abraham Erskine, ‘Captain America: The First Avenger’
79. “At some point, we all have to choose, between what the world wants you to be, and who you are.” – Natasha Romanoff, Marvel Studios’ Black Widow’ 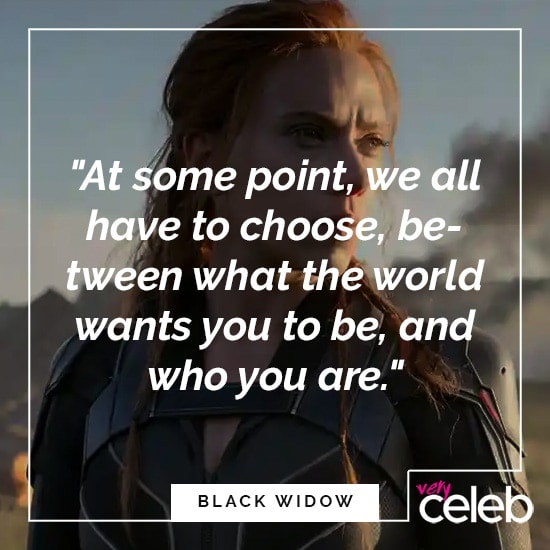 80. “There is a right and a wrong in the universe and the distinction should not be hard to make.” – Superman
81. “It doesn’t take x-ray vision to see you are up to no good.” – Superman
82. “It’s not who I am underneath, but what I do that defines me.” – Batman
83. “The answers you seek shall be yours, once I claim what’s mine.” – Thor
84. “If there is nothing but what we make in this world, brothers…let us make it good.” – Beta Ray Bill
85. “What is a superhero? They’re supposed to represent hope, opportunity, and strength for everybody.” – Aldis Hodge
86. “Intelligence is a privilege, and it needs to be used for the greater good of people.”– Dr. Octopus
In this article:
Up Next:

55 Ray Lewis Quotes to Unleash the Athlete in You