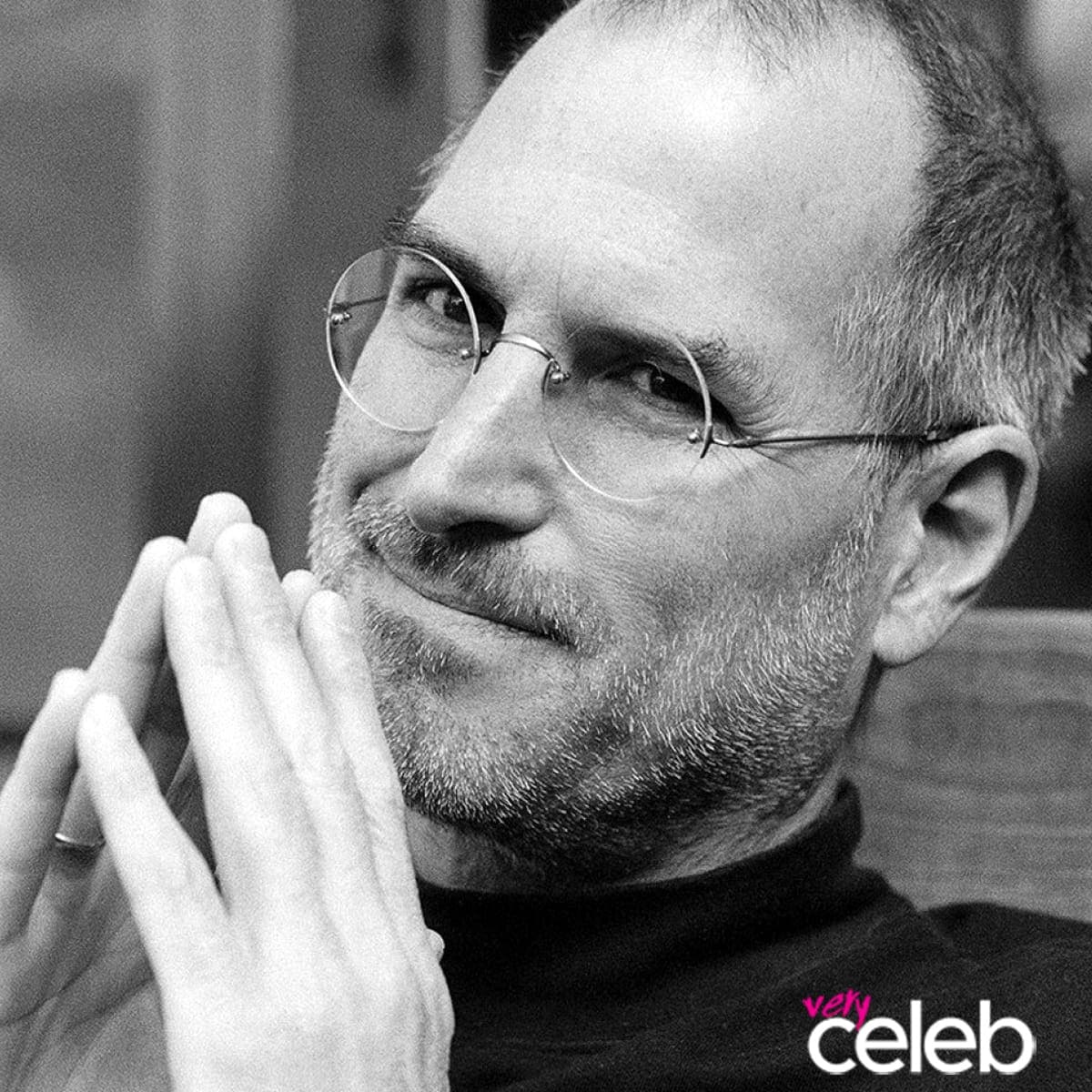 The world of business is dominated by people who have a product or service to offer the world. Of course, it is about making revenue at first, but to get to that revenue-making venture, there has to be some spark of inspiration first. Business people are inspirational at the very beginning of their careers, and although they may wither and lose millions, they will always find something of value to people and sell. We have all seen how they work, how they inspire other, and how they love the feeling and excitement that goes with competitions and having that big breakthrough.

In many television series, we have seen business geniuses and magnates go toe-to-toe with each other. We have seen this in the likes of Steve Jobs versus Bill Gates; tv inventor Philo Farnsworth versus telecommunications giant David Sarnoff, and the list goes on. In a way, these successful business people have found great inspiration as they compete against each other. They have given the world inventions, worldly delights, appliances, entertainment gadgets, and so on. Let us hear 70 of the most inspirational business quotes: 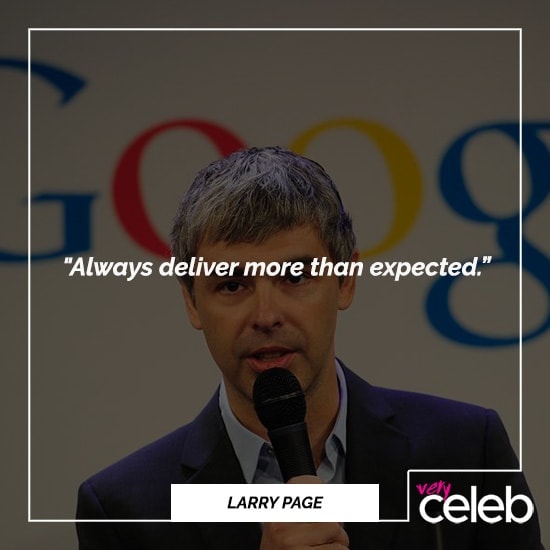 2. “Always think outside the box and embrace opportunities that appear, wherever they might be.” — Lakshmi Mittal, Chairman & CEO of ArcelorMittal
3. “Do not let the memories of your past limit the potential of your future. There are no limits to what you can achieve on your journey through life, except in your mind.” ― Roy T. Bennett, author
4. “Embrace what you don’t know, especially in the beginning, because what you don’t know can become your greatest asset. It ensures that you will absolutely be doing things different from everybody else.” — Sara Blakely, founder of SPANX
5. ”Data beats emotions.” — Sean Rad, founder of Tinder 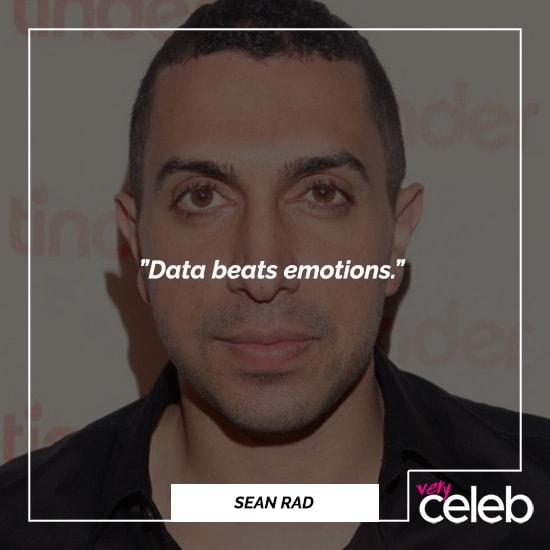 6. “Don’t take too much advice. Most people who have a lot of advice to give — with a few exceptions — generalize whatever they did. Don’t over-analyze everything.  I myself have been guilty of over-thinking problems. Just build things and find out if they work.” — Ben Silbermann, founder of Pinterest
7. “If your actions inspire others to dream more, learn more, do more and become more, you are a leader.” — John Quincy Adams, 6th President of the United States
8. “The stars will never align, and the traffic lights of life will never all be green at the same time. The universe doesn’t conspire against you, but it doesn’t go out of its way to line up the pins either. Conditions are never perfect. ‘Someday’ is a disease that will take your dreams to the grave with you. Pro and con lists are just as bad. If it’s important to you and you want to do it ‘eventually,’ just do it and correct course along the way.” — Tim Ferriss, author of The 4-Hour Work Week
9. “It’s not about ideas. It’s about making ideas happen.” — Scott Belsky, co-founder of Behance 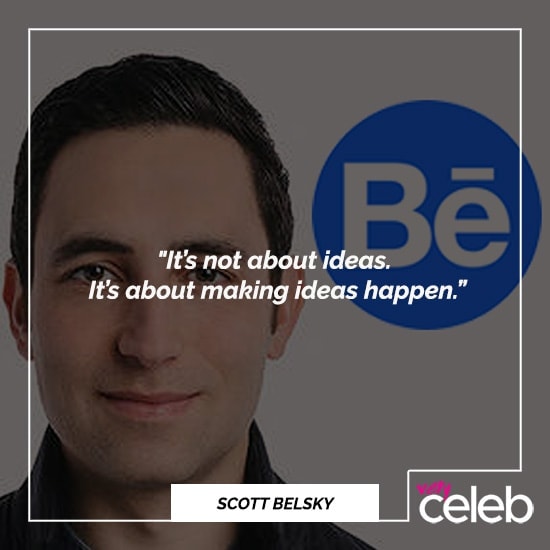 10. “Life isn’t about finding yourself. Life is about creating yourself.”― George Bernard Shaw, Irish playwright
11. “What do you need to start a business? Three simple things: know your product better than anyone, know your customer, and have a burning desire to succeed.” — Dave Thomas, Founder of Wendy’s
12. “The first rule of any technology used in a business is that automation applied to an efficient operation will magnify the efficiency. The second is that automation applied to an inefficient operation will magnify the inefficiency.” — Bill Gates, co-founder of Microsoft
13. “Step out of the history that is holding you back. Step into the new story you are willing to create.” — Oprah Winfrey, media proprietor
14. “Human beings have an innate inner drive to be autonomous, self-determined and connected to one another. And, when that drive is liberated, people achieve more and live richer lives.” — Daniel Pink, author
15. “I never dreamed about success, I worked for it.” — Estee Lauder, founder of Estee Lauder Cosmetics 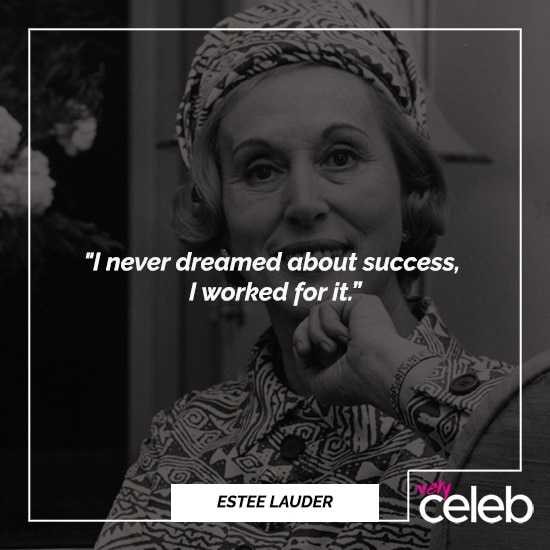 16. “If you’re interested in the living heart of what you do, focus on building things rather than talking about them.” — Ryan Freitas, co-founder of About.me
17. “It’s more effective to do something valuable than to hope a logo or name will say it for you.” — Jason Cohen, founder of Smartbear Software
18. “Some people dream of success, while other people get up every morning and make it happen.” — Wayne Huizenga, prolific American business person, owner of Blockbuster Video and the Miami Dolphins
19. “You don’t need to have a 100-person company to develop that idea.” — Larry Page, co-founder of Google
20. “Your most unhappy customers are your greatest source of learning.” — Bill Gates, co-founder of Microsoft 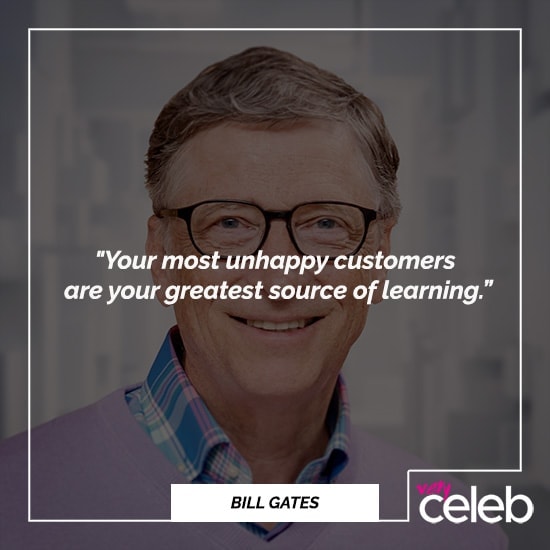 21. “There’s nothing wrong with staying small. You can do big things with a small team.” — Jason Fried, 37signals founder and co-author of Rework
22. “The biggest adventure you can take is to live the life of your dreams.”– Michael Jordan, American former professional basketball player
23. “No more romanticizing about how cool it is to be an entrepreneur. It’s a struggle to save your company’s life – and your own skin – every day of the week.” — Spencer Fry, co-founder of CarbonMade
24. “See things in the present, even if they are in the future.” — Larry Ellison, co-founder of Oracle 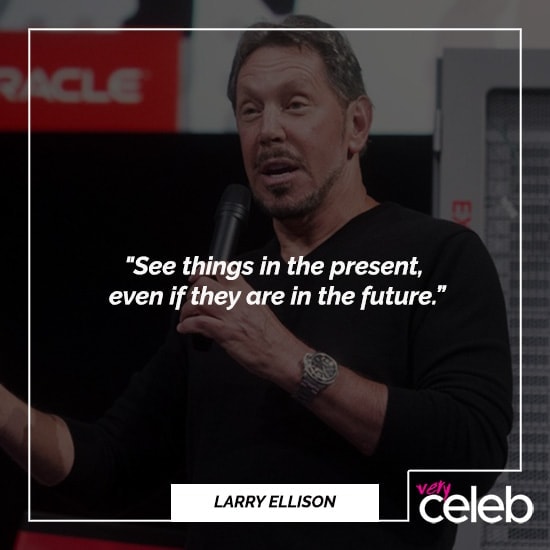 25. “Money is like gasoline during a road trip. You don’t want to run out of gas on your trip, but you’re not doing a tour of gas stations.” — Tim O’Reilly, founder, and CEO of O’Reilly Media
26. “When I’m old and dying, I plan to look back on my life and say ‘wow, that was an adventure,’ not ‘wow, I sure felt safe.’” — Tom Preston-Werner, co-founder of Github
27. “You Are Never Too Old To Set Another Goal Or To Dream A New Dream.” – C.S. Lewis, British writer
28. “There is no greater agony than bearing an untold story inside you.” ―Maya Angelou, American poet, singer, and civil rights activist
29. “The biggest adventure you can take is to live the life of your dreams.” ― Oprah Winfrey, media proprietor
30. “Risk more than others think is safe. Dream more than others think is practical.” — Howard Schultz, CEO of Starbucks 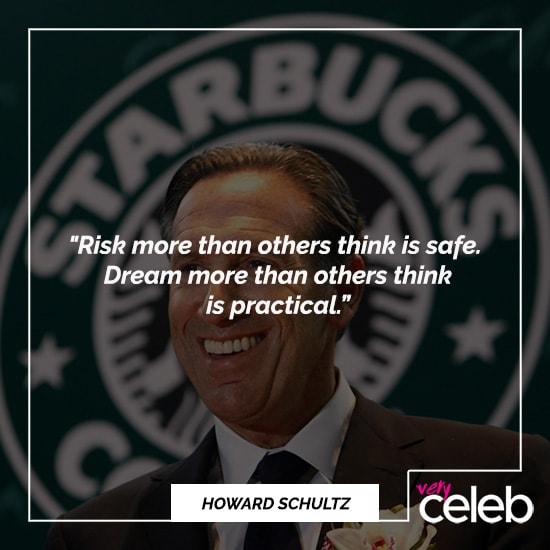 31. “Live each day as if your life had just begun.” – Johann Wolfgang Von Goethe, German writer
32. “However difficult life may seem, there is always something you can do and succeed at.” — Stephen Hawking, English theoretical physicist, cosmologist, and author
33. “Remembering that you are going to die is the best way I know to avoid the trap of thinking you have something to lose. You are already naked. There is no reason not to follow your heart.” — Steve Jobs, co-founder, Chairman and CEO of Apple Inc.
34. “Ideas are commodity. Execution of them is not.” — Michael Dell, chairman, and CEO of Dell 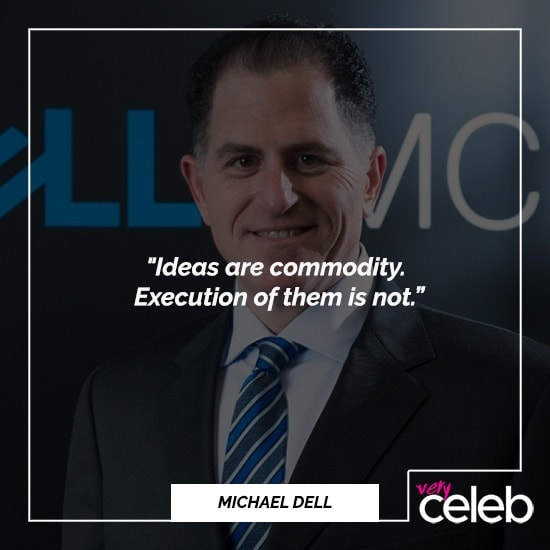 35. “When you find an idea that you just can’t stop thinking about, that’s probably a good one to pursue.” — Josh James, CEO and co-founder of Omniture
36. “You get in life what you have the courage to ask for.” ― Oprah Winfrey, media proprietor
37. “Your work is going to fill a large part of your life, and the only way to be truly satisfied is to do what you believe is great work. And the only way to do great work is to love what you do.” — Steve Jobs, co-founder, Chairman and CEO of Apple Inc.
38. “Make the most of yourself by fanning the tiny, inner sparks of possibility into flames of achievement.” — Golda Meir, fourth Prime Minister of Israel
39. “Life is 10% what happens to us and 90% how we react to it.”– Charles R. Swindoll, author, educator, and radio preacher
40. “The value of an idea lies in the using of it.” — Thomas Edison, co-founder of General Electric 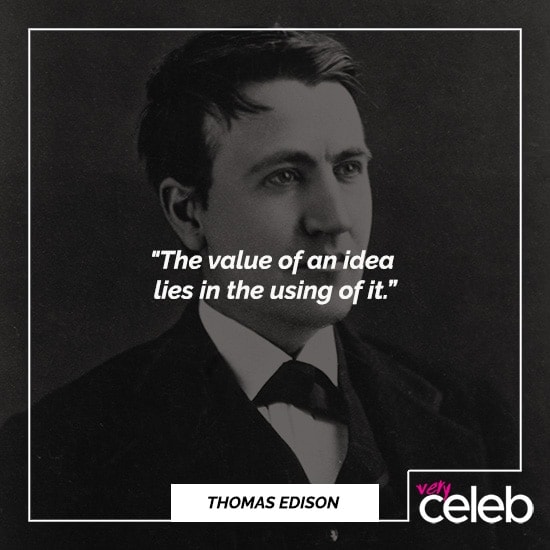 41. “A person who is quietly confident makes the best leader.” — Fred Wilson, co-founder of Union Square Ventures
42. “Accept responsibility for your life. Know that it is you who will get you where you want to go, no one else.” – Les Brown, American motivational speaker, author, and former politician
43. “Character cannot be developed in ease and quiet. Only through experience of trial and suffering can the soul be strengthened, ambition inspired, and success achieved.” — Helen Keller, American author, political activist and lecturer
44. “Always look for the fool in the deal. If you don’t find one, it’s you.” — Mark Cuban, AXS TV Chairman 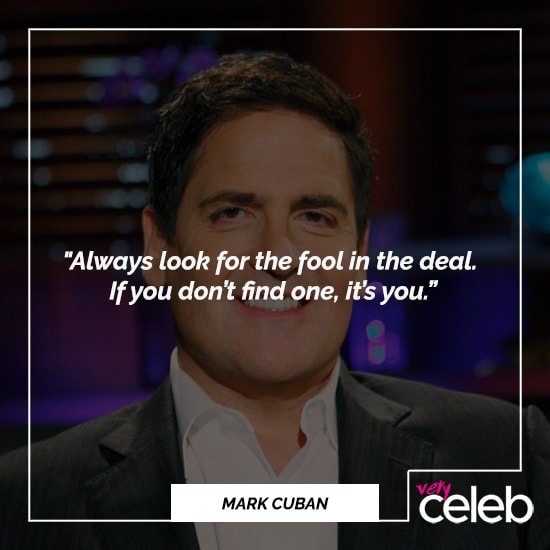 45. “Be undeniably good. No marketing effort or social media buzzword can be a substitute for that.” — Anthony Volodkin, founder of Hype Machine
46. “All humans are entrepreneurs not because they should start companies but because the will to create is encoded in human DNA.” — Reid Hoffman, co-founder of LinkedIn
47. “Best startups generally come from somebody needing to scratch an itch.” — Michael Arrington, founder and co-editor of TechCrunch
48. “Chase the vision, not the money, the money will end up following you.” — Tony Hsieh, CEO of Zappos
49. “Anything that is measured and watched, improves.” — Bob Parsons, founder of GoDaddy 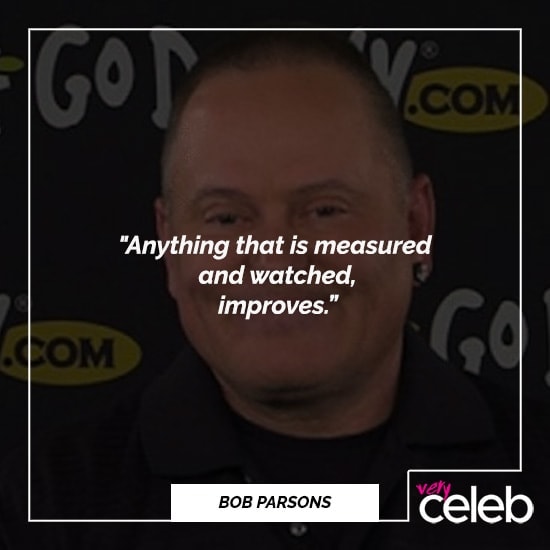 50. “Get big quietly, so you don’t tip off potential competitors.” — Chris Dixon, an investor at Andreessen Horowitz
51. “Every day that we spent not improving our products was a wasted day.” — Joel Spolsky, co-founder of Stack Overflow
52. “Don’t be cocky. Don’t be flashy. There’s always someone better than you.” — Tony Hsieh, CEO of Zappos
53. “The last 10% it takes to launch something takes as much energy as the first 90%.” — Rob Kalin, founder of Etsy
54. “The most dangerous poison is the feeling of achievement. The antidote is to every evening think what can be done better tomorrow.” — Ingvar Kamprad, founder of IKEA
55. “Get a mentor in the applicable field if you’re at all unsure of what you’re looking for.” — Kyle Bragger, founder of Forrst, and co-founder of Exposure
56. “You can’t make anything viral, but you can make something good.” — Peter Shankman, founder of HARO
57. “In the end, a vision without the ability to execute it is probably a hallucination.” — Steve Case, co-founder of AOL
58. “If you can dream it, you can do it.” — Walt Disney, founder of the Disney Brother Studio and Disneyland 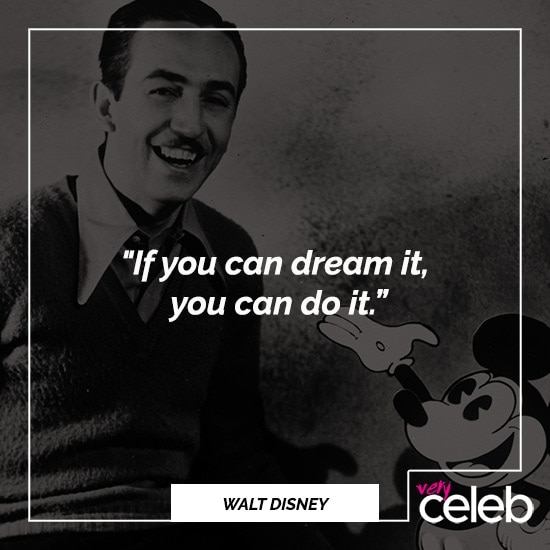 59. “If you just work on stuff that you like and you’re passionate about, you don’t have to have a master plan with how things will play out.” — Mark Zuckerberg, founder of Facebook
60. “If you define yourself by how you differ from the competition, you’re probably in trouble.” — Omar Hamoui, co-founder of AdMob
61. “Don’t worry about funding if you don’t need it. Today it’s cheaper to start a business than ever.” — Noah Everett, founder of Twitpic
62. “Every time we launch a feature, people yell at us.” — Angelo Sotira, co-founder of deviantART
63. “Design is not just what it looks like and feels like. Design is how it works.” — Steve Jobs, co-founder, Chairman, and CEO of Apple Inc.
64. “If you can’t feed a team with two pizzas, it’s too large.” — Jeff Bezos, Founder and CEO of Amazon 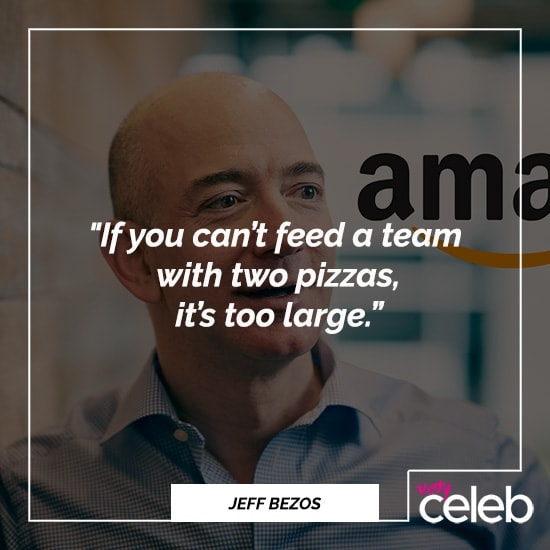 65. “Don’t play games that you don’t understand, even if you see lots of other people making money from them.” — Tony Hsieh, CEO of Zappos
66. “Fortunes are built during the down market and collected in the upmarket.” — Jason Calacanis, founder of LAUNCH Ticker
67. “Get five or six of your smartest friends in a room and ask them to rate your idea.” — Mark Pincus, CEO of Zynga
68. “If you are not embarrassed by the first version of your product, you’ve launched too late.” — Reid Hoffman, co-founder of LinkedIn
69. “Make every detail perfect and limit the number of details to perfect.” — Jack Dorsey, co-founder of Twitter
70. “Whether you think you can, or think you can’t – you’re right.” — Henry Ford, founder of the Ford Motor Company 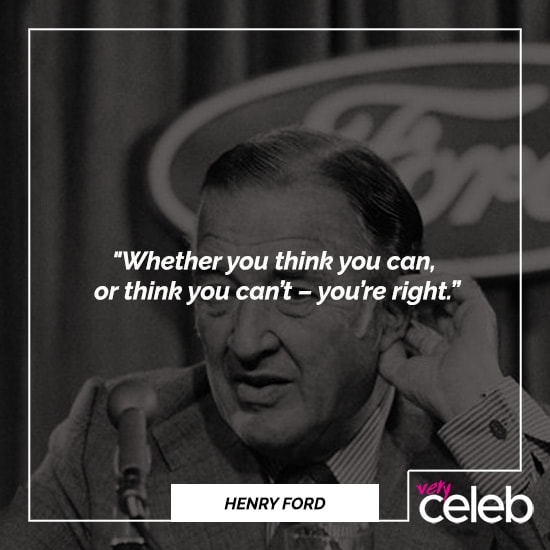