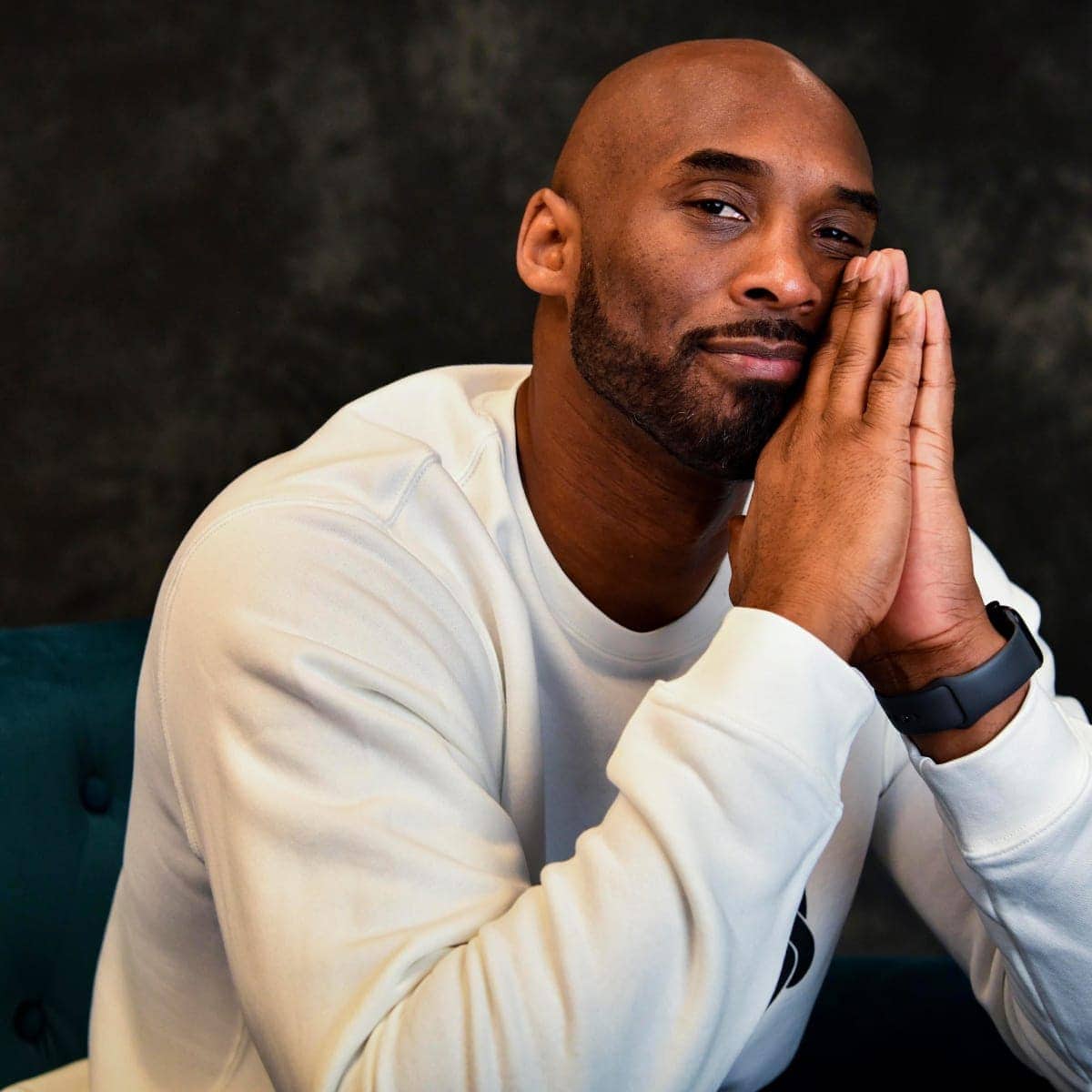 Billions of fans all over the world mourned on January 26, 2020 when one of basketball’s legends died. His full name was Kobe Bean Bryant and he was born on August 23, 1978, Kobe is a highly accomplished athlete known for winning 5 championships, a Most Valuable Player Award, All-Star Selections, and Olympic Gold medals. He came into the National Basketball League as a highly sought player, being professional teams back then already had a knowledge of how good Bryant was coming from Lower Merion’s High School basketball team. And so, it was destined that he would become a basketball great.

Although not drafted originally for the Lakers, Kobe did become a Laker, and one of the best if not the greatest Laker of all time. It was his team up with Shaquille O’Neal that had them win three straight NBA World Championships. However, Kobe Bryant wanted to be distinguished for the talent and man that he was, so after splitting with Shaquille, he went on to win two more championships, cementing his name as one of the best ever. Kobe Bryant has endured and loved the challenge of being the so-called next Michael Jordan. However, he did his best to show the world that he is his own man. He did become a legend and helped many people along the way. Sadly, on his way to his daughter’s basketball game, taking a helicopter, their vehicle crashed, and he was killed together with his daughter, Gianna, along with a number of others. Without further ado, let’s know the legend more by looking into some of his well-known quotes. 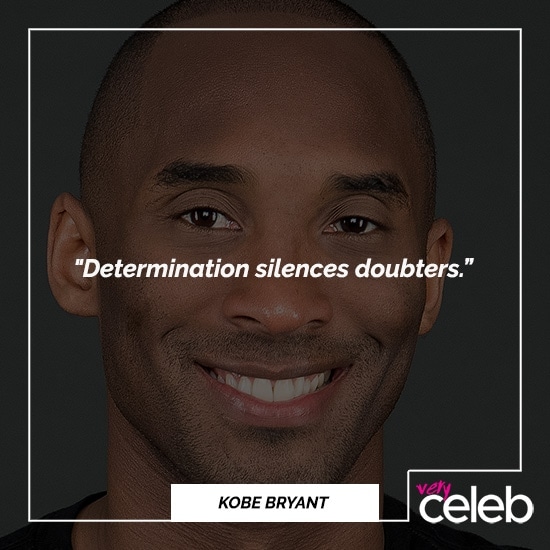 2. “Be willing to sacrifice anything, but compromise nothing in your quest to be your best.”
3. “I’ll do whatever it takes to win games, whether it’s sitting on a bench waving a towel, handing a cup of water to a teammate, or hitting the game-winning shot.”
4. “One thing you gotta know about me is I have absolutely no filter. I have no problem saying what the hell I think of someone.”
5. ”I’m chasing perfection.” 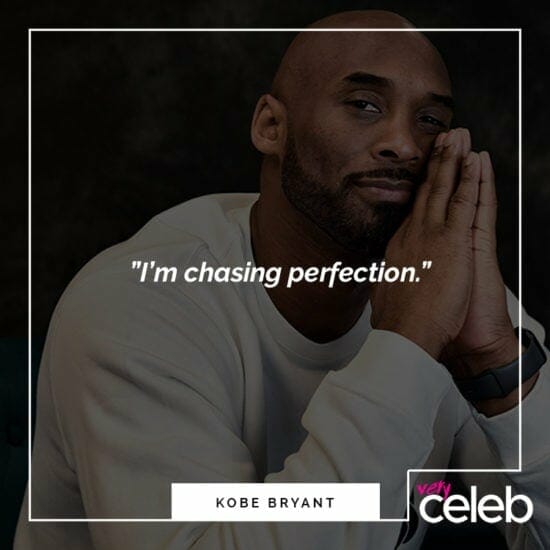 6. “I can’t relate to lazy people. We don’t speak the same language. I don’t understand you. I don’t want to understand you.”
7. “I’m extremely willful to win, and I respond to challenges. It’s not a challenge to me to win the scoring title, because I know I can.”
8. “Can I jump over two or three guys like I used to? No. Am I as fast as I used to be? No, but I still have the fundamentals and smarts. That’s what enables me to still be a dominant player. As a kid growing up, I never skipped steps. I always worked on fundamentals because I know athleticism is fleeting.”
9. “Dedication sees dreams come true.” 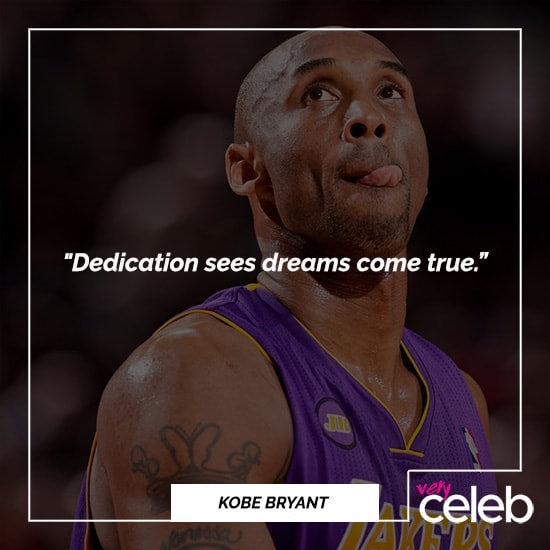 10. “Everything negative – pressure, challenges – is all an opportunity for me to rise.”
11. “I create my own path. It was straight and narrow. I looked at it this way: you were either in my way, or out of it.”
12. “I’m here. I’m not going anywhere. No matter what the injury – unless it’s completely debilitating – I’m going to be the same player I’ve always been. I’ll figure it out. I’ll make some tweaks, some changes, but I’m still coming.”
13. “If you are going to be a leader, you’re not going to please everybody. You got to hold people accountable, even if you have that moment of being uncomfortable.”
14. “The most important thing is to try and inspire people so that they can be great in whatever they want to do.”
15. “Winning takes precedence over all. There’s no gray area. No almost.” 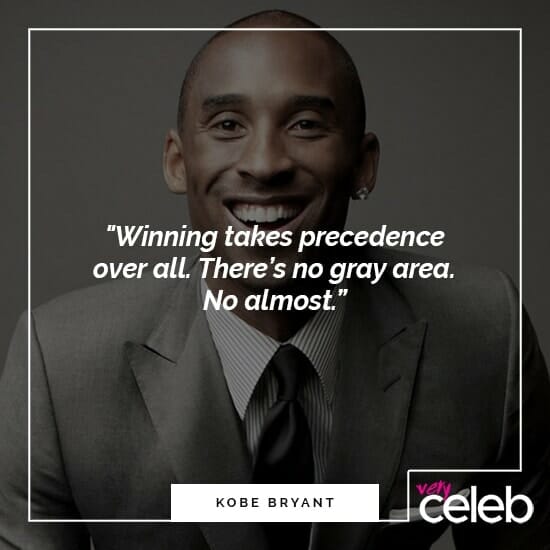 16. “Sports are such a great teacher. I think of everything they’ve taught me: camaraderie, humility, how to resolve differences.”
17. “The examples are endless but my philosophy is simple. Once I knew my seed, I was able to discover my muse and my purpose for being was crystal clear.”
18. “Pain doesn’t tell you when you ought to stop. Pain is the little voice in your head that tries to hold you back because it knows if you continue you will change.”
19. “If you want to be great at something, there’s a choice you have to make. What I mean by that is, there are inherent sacrifices that come along with that. Family time, hanging out with friends, being a great friend, being a great son, nephew, whatever the case may be.”
20. “Passion is the fuel for success.” 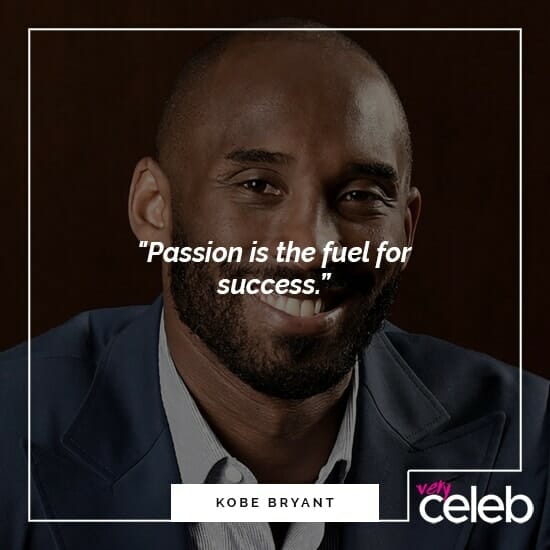 21. “It doesn’t bother me at all. Do I hold any hard feelings? Not at all. Life is too short to sit around and hold grudges. I don’t hold any whatsoever.”
22. “My parents are my backbone. Still are. They’re the only group that will support you if you score zero or you score 40.”
23. “It’s disgusting, but my father taught me when your mouth gets dry, just suck the sweat out of your own jersey. There’s no bravado to any of it; it’s just a disgusting little trick.”
24. “If you don’t believe in yourself, no one will do it for you.” 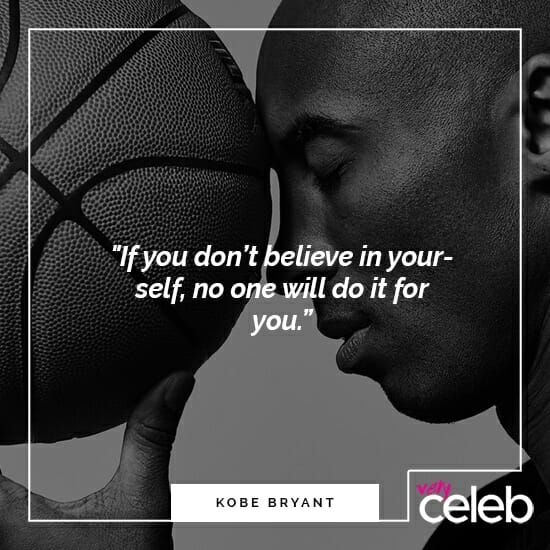 25. “My brain . . . it cannot process failure. It will not process failure. Because if I sit there and have to face myself and tell myself, ‘You’re a failure’ . . . I think that’s almost worse than death.”
26. “The important thing is that your teammates have to know you’re pulling for them and you really want them to be successful.”
27. “The people who truly know me know what I’m like. There have been people who try to say things that aren’t fair, and I check them. And then they don’t like me because I checked them.”
28. “Use your success, wealth and influence to put them in the best position to realize their own dreams and find their true purpose.”
29. “The topic of leadership is a touchy one. A lot of leaders fail because they don’t have the bravery to touch that nerve or strike that chord. Throughout my years, I haven’t had that fear.”
30. “Once you know what failure feels like, determination chases success.” 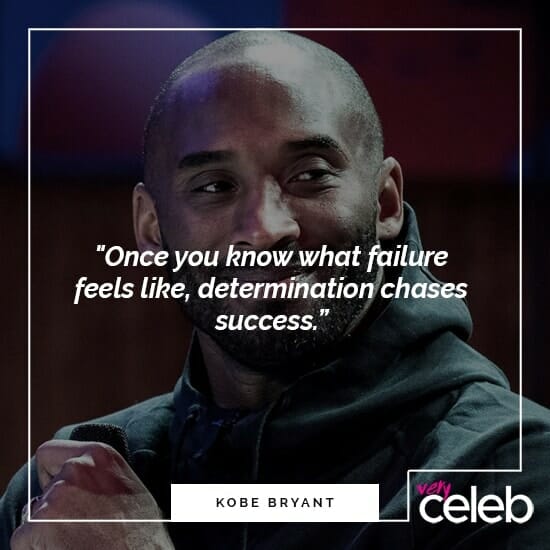 31. “This is the moment I accept the most challenging times will always be behind me and in front of me.”
32. “Christmas morning, I’m going to open presents with my kids. I’m going to take pictures of them opening the presents. Then I’m going to come to the Staples Center and get ready to work.”
33. “Haters are a good problem to have. Nobody hates the good ones. They hate the great ones.”
34. “Boos don’t block dunks.” 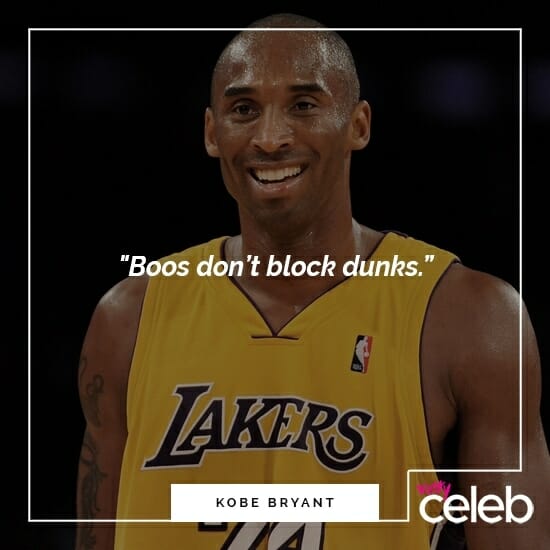 35. “I focus on one thing and one thing only – that’s trying to win as many championships as I can.”
36. “I’m reflective only in the sense that I learn to move forward. I reflect with a purpose.”
37. “The beauty in being blessed with talent is rising above doubters to create a beautiful moment.”
38. “We all have self-doubt. You don’t deny it, but you also don’t capitulate to it. You embrace it.”
39. “We can always kind of be average and do what’s normal. I’m not in this to do what’s normal.”
40. “I don’t want to be the next Michael Jordan, I only want to be Kobe Bryant.” 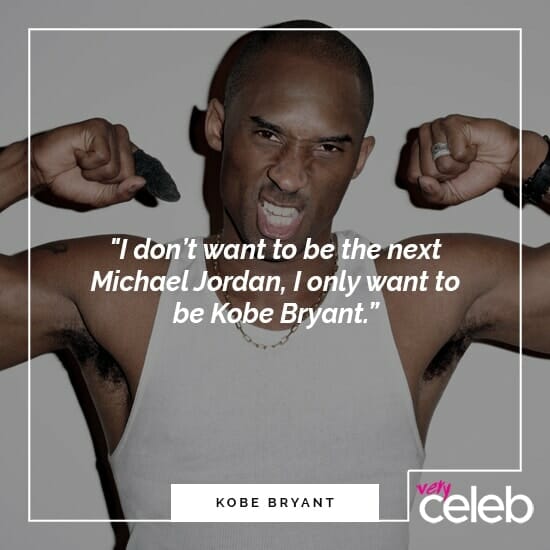 41. “I like playing for the purple and gold. This is where I want to finish up.”
42. “I realized that intimidation didn’t really exist if you’re in the right frame of mind.”
43. “The odd thing is that I wound up learning more about the world around me by having a singular focus inside of me.”
44. “If I panic, everyone else panics.” 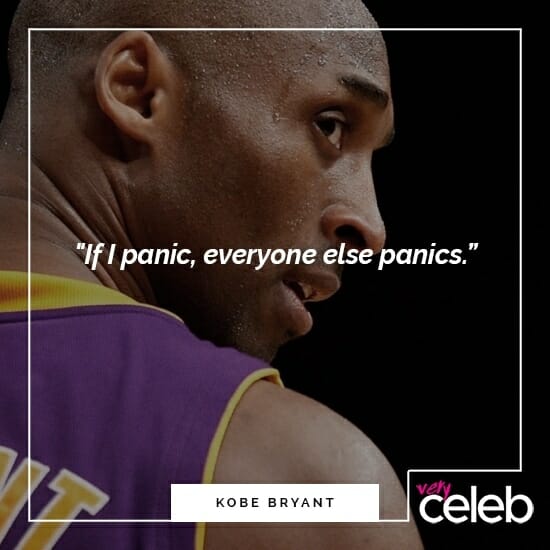 45. “People just don’t understand how obsessed I am with winning.”
46. “Trust me, setting things up right from the beginning will avoid a ton of tears and heartache…”
47. “We don’t quit, we don’t cower, we don’t run. We endure and conquer.”
48. “The biggest dreams aren’t fueled by belief. They’re fueled by doubt.”
49. “What people see on court is another side of me; it’s not me.”
50. “The moment you give up, is the moment you let someone else win.” 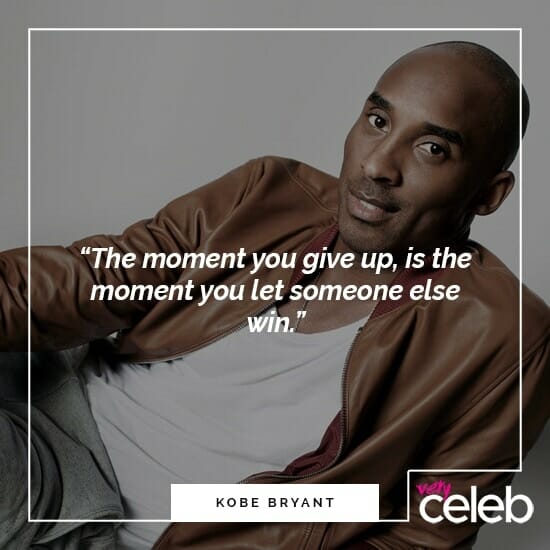 50 Marilyn Monroe Quotes that Will Make You Swoon