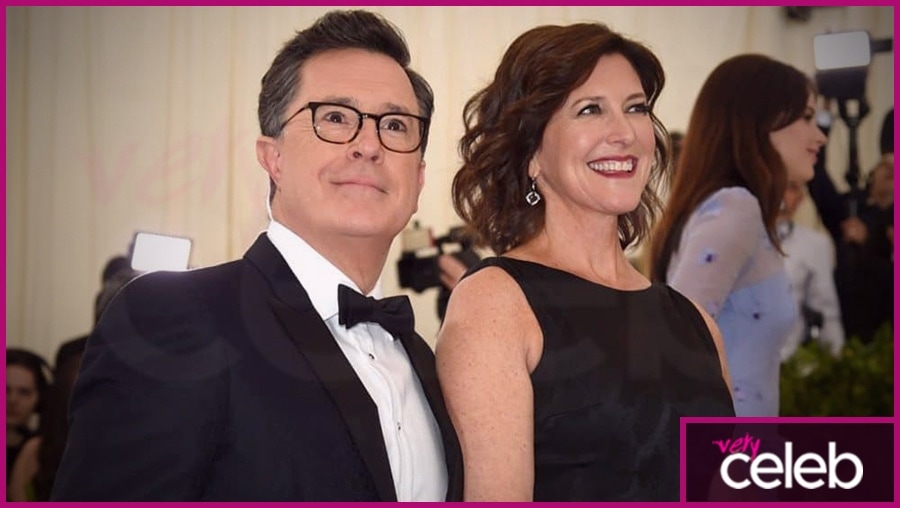 She is the daughter of Joseph McGee, a prominent litigator from the Buist Moore Smythe McGee firm. It was love at first sight when Colbert met Evelyn at the world premiere of Hydrogen Jukebox, a chamber opera. They spent several hours talking to each other and learned that they both grew up a few blocks away from each other.

The details on their engagement are a bit fuzzy but Colbert probably popped the question sometime during the spring of 1993. The wedding happened just months after the engagement – October 9, 1993. The ceremony was kept mostly private.

Evelyn McGee may not be as famous as her husband but she has engaged in some noteworthy projects. McGee is an actress and a producer, known for The Hobbit: The Desolation of Smaug. She was born in Charleston, South Carolina, USA on July 23, 1963.

How did Stephen Colbert meet his wife?

The couple first met at the world premiere of Hydrogen Jukebox at the Spoleto Festival USA.

At the time, Stephen had been dating another girl called Anne for several years. Anne imposed an ultimatum on Stephen: either they get married or they break up. Stephen was confused, because, as he says he did love Anne – he just did not want to marry her because they had many problems in their relationship. So, he told Anne to give him some time to think and went back to his hometown, Charleston, South Carolina. He spoke to his mother and concluded that the best thing to do was to not marry Anne.

Later that night, his mother gave him the tickets to the Spoleto Festival. As soon as he walked in, he spotted a woman in a black linen dress that he instantly fell for – in fact, he says his exact thoughts were: “There’s your wife. You’re going to marry her.” They kept looking at each other during the play and went to the afterparty together. The woman turned out to be Evelyn McGee and they realized they had grown up in the same town. They spoke for two hours that night. Stephen believed she was just being polite, so he grabbed the chance to turn his back to her while she was chatting with someone else at the party in order to give her the ability to walk away politely. However, she didn’t – she was still there, smiling.

That is the moment he knew he wanted to marry her.

What Does Evelyn McGee do for a living?

Evelyn McGee is an actress and a producer. In 2013, she was cast in the epic high fantasy adventure movie, The Hobbit: The Desolation of Smaug which became a huge success at the box office grossing over 958 million dollars worldwide.

Does Evelyn McGee have any children?

Evelyn McGee is blessed with 3 children: a daughter Madeleine Colbert, along with sons Peter Colbert and John Colbert.

How old is Evelyn McGee?

What is Evelyn McGee’s nationality?

Evelyn was raised in her hometown in Charleston, South Carolina. She is American.

How much is Evelyn McGee’s net worth?

Evelyn is an independent woman who has made the most out of her career. Her net worth is over 1 million dollars.

How tall is Evelyn McGee and how much does she weigh?

Evelyn has maintained her figure perfectly. However, her exact measurements have not been disclosed to the public.

Is Evelyn McGee single or married?

On October 9, 1993, Evelyn McGee married actor, host and comedian, Stephen Colbert. They have been married for over 26 years.

The Late Show with @StephenAtHome is the #1 show in late night. Watch #Colbert on @CBS & @ParamountPlus. 🎧 Podcast: https://t.co/Xy7VSzZoiT…

Did you know @DanaiGurira and @stephenathome both starred in #LawAndOrder?! There was just one small issue with her character's name… #Colbert

Hey parents! Do your kids have a question for @stephenathome and his celebrity friends, like @tomhanks?

Share a video with the hashtag #ColbertKidQuestions or head to
http://ColbertLateShow.com/KidQuestions to submit for a chance to be featured in the next installment of Kid Questions!

Now this had to be one of the most touching moments all night... Congrats to @Harry_Styles on Album Of The Year. #GRAMMYs

Do you dream of getting in touch with Stephen Colbert and his wife?

We may be able to help you achieve your goal, so just ask and we’ll do our best.

Who Is Jeff Goldblum’s Wife? All The Info About Her Career & Marriage

Shana Render – The Woman Behind the Rap