Thanos is perhaps one of the most reviled yet widely studied and fascinating villain in the Marvel universe comics and films franchise. The reason for this is simple; he had the willpower and the guts to assemble the most destructive weapon in the history of the Marvel universe, which is the Infinity Gauntlet. The weapon is made of six stones capable of unleashing transformative power. The gauntlet so powerful and Thanos so daring that he decided to rid half of the world’s population including superheroes themselves. A native of Titan, Thanos saw his world collapse and so decided that he would take it upon himself to rid the universe of half of its people in order to restore harmony and order. Because of such unique philosophical approach to life and order, since 1973, which means that for almost 5 decades now, the character has been hugely part of the Marvel storylines, including the latest Marvel movies such as The Avengers in 2012, Guardians of the Galaxy in 2014, Avengers: Age of Ultron in 2015, Avengers: Infinity War in 2018), and Avengers: Endgame in 2019.

Together with the conflict that Thanos brings to the table, he is also one of the mightiest, often beating many of the superheroes. Some of the epic battles that Thanos has engaged in include those against the Avengers, Guardians of the Galaxy, X-Men, and the Fantastic Four. With his enormous physique, reputation and determination, it is worth to know the mind of one of the most lasting villains of all time. Here are some of our favorite Thanos quotes.

1. “This day extracts a heavy toll. Still, he accomplished his mission.” 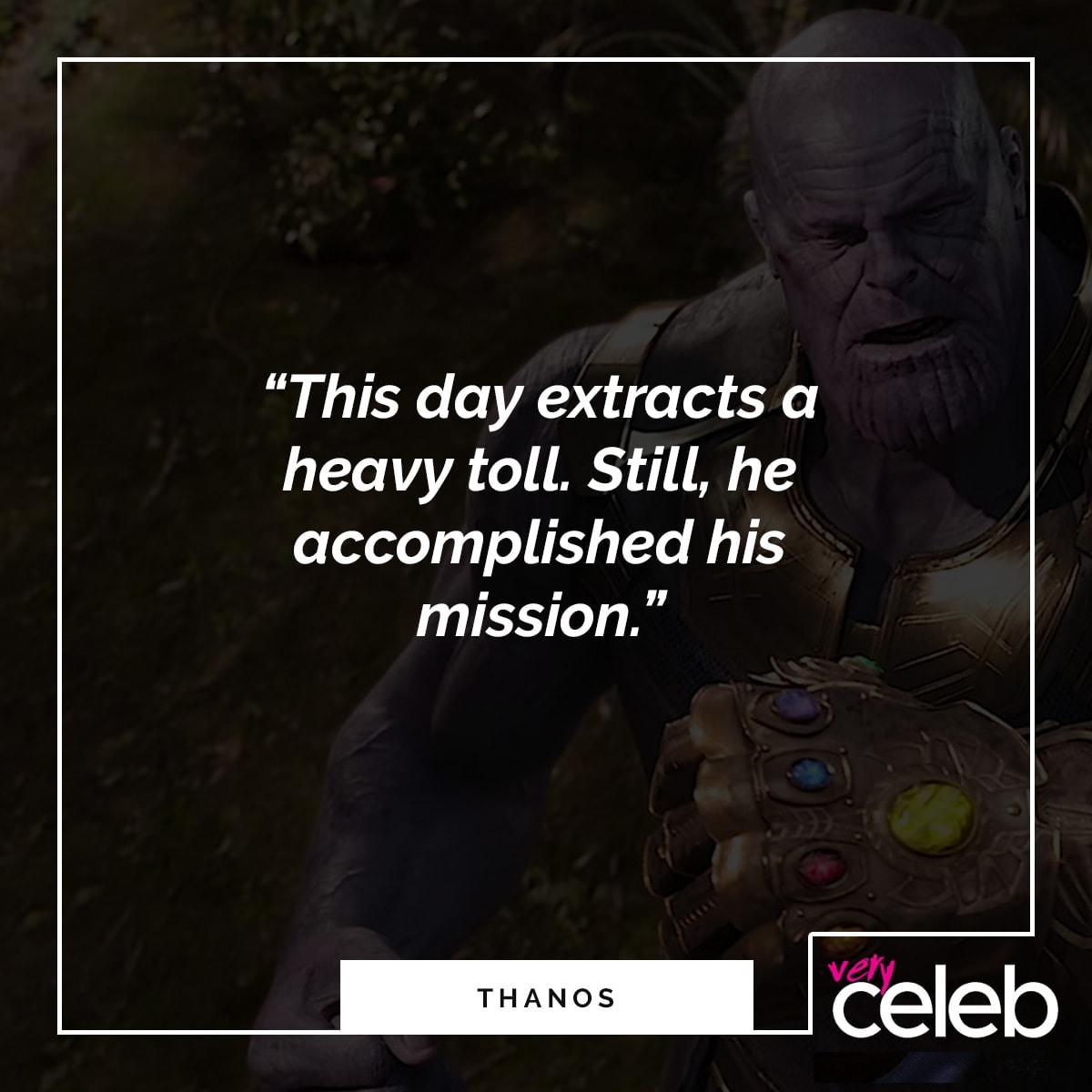 2. “I’m the only one who knows that. At least I’m the only who has the will to act on it. For a time, you had that same will. As you fought by my side, daughter.”
3. “You’re not the only one cursed with knowledge.”
4. “At random. Dispassionate, fair. The rich and poor alike. And they called me a madman. And what I predicted, came to pass.”
5. “I finally rest, and watch the sunrise on a grateful universe. The hardest choices require the strongest wills.”
6. “When I’m done, half of humanity will still be alive.”
7. “You’re a great fighter, Gamora. Come. Let me help you.”
8. “When I’m done, half of humanity will still exist. Perfectly balanced, as all things should be. I hope they remember you.” 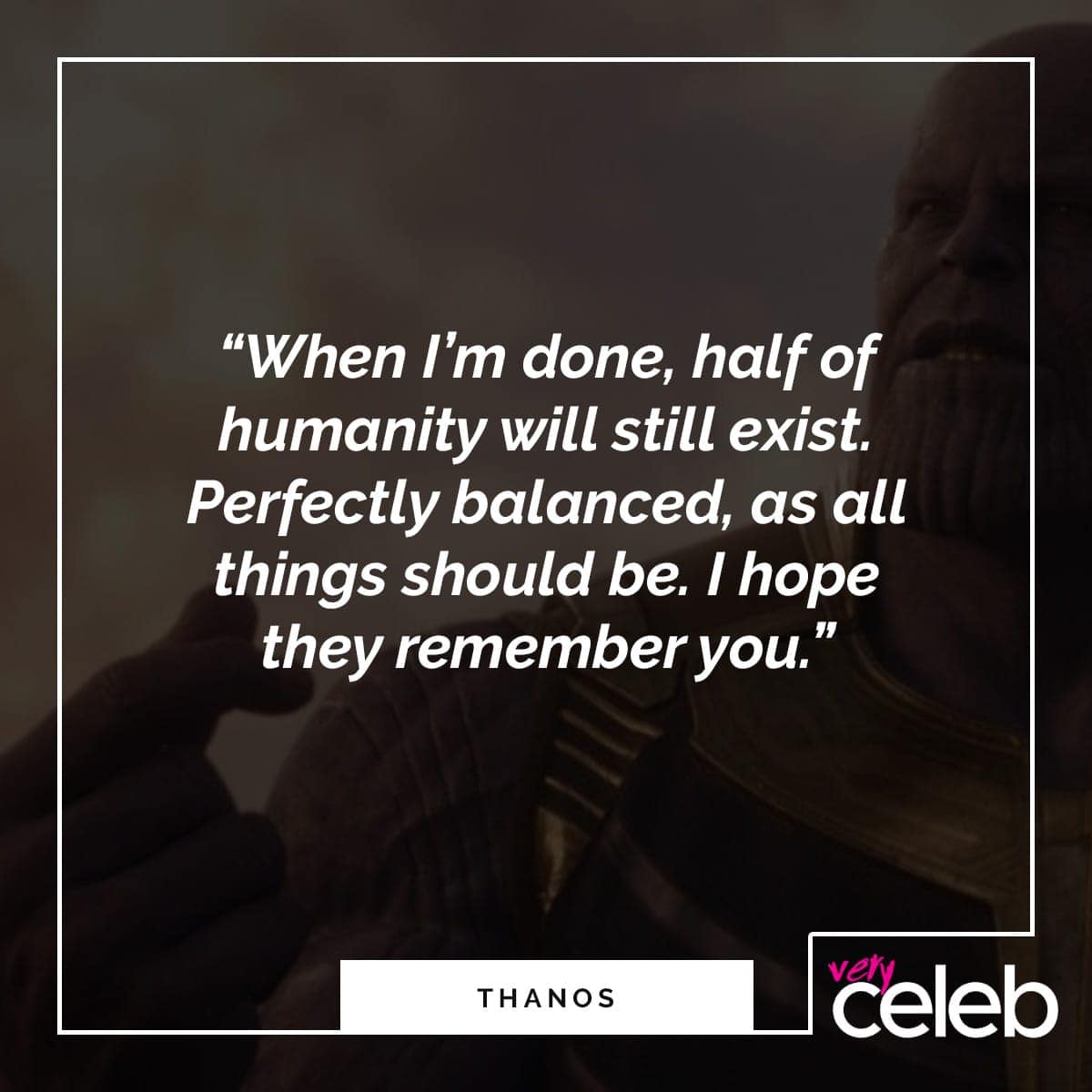 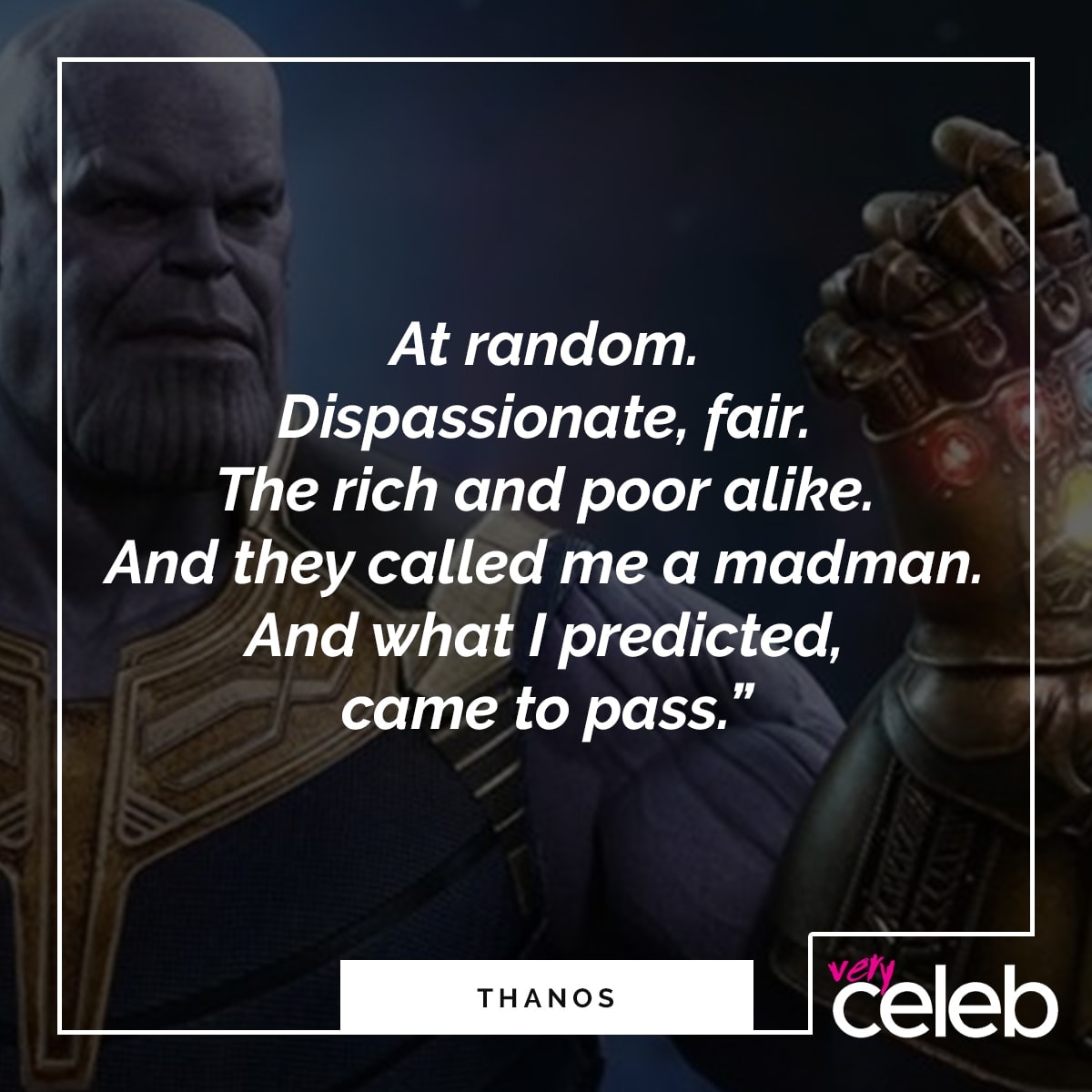 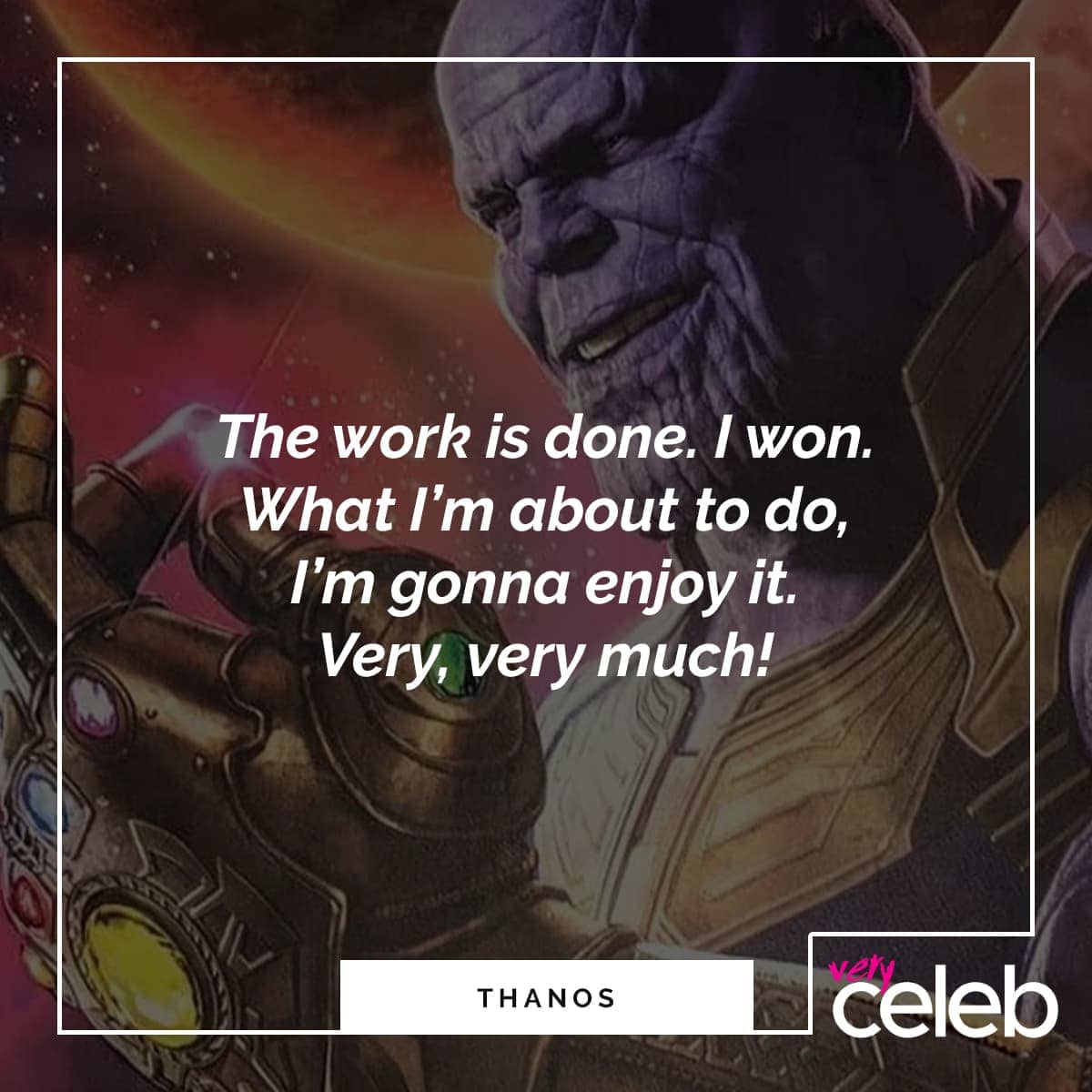 24. “You were going to bed hungry, scrounging for scraps. Your planet was on the brink of collapse. I’m the one who stopped that. You know what’s happened since then? The children born have known nothing but full bellies and clear skies. It’s a paradise.”
25. “You’re strong. Me… You’re generous. Me… But I never taught you to lie. That’s why you’re so bad at it. Where is the Soul Stone?”
26. “You’re strong, but i could snap my fingers and you’d all cease to exist.”
27. “Your politics bore me. Your demeanor is that of a pouty child. Return me again empty-handed… And I will bathe the stairways in your blood.” 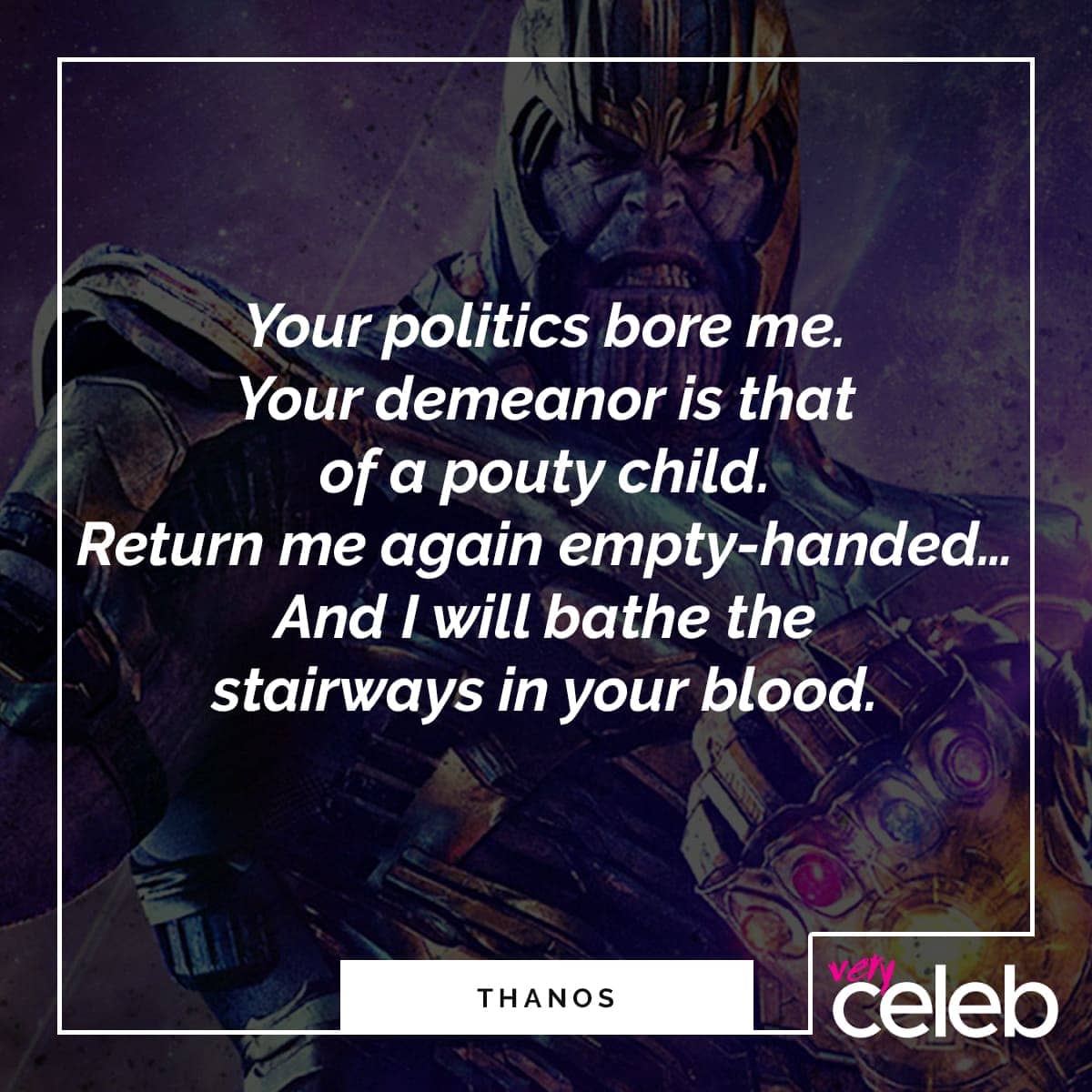 28. “I ignored my destiny once, I can not do that again. Even for you. I’m sorry Little one.”
29. “Dread it, run from it, destiny arrives all the same.”
30. “I finally rest, and watch the sunrise on a grateful universe. The hardest choices require the strongest wills.”
31. “The work is done. I won. What I’m about to do, I’m gonna enjoy it. Very, very much!”
32. “They called me a madman. And what I predicted came to pass.” 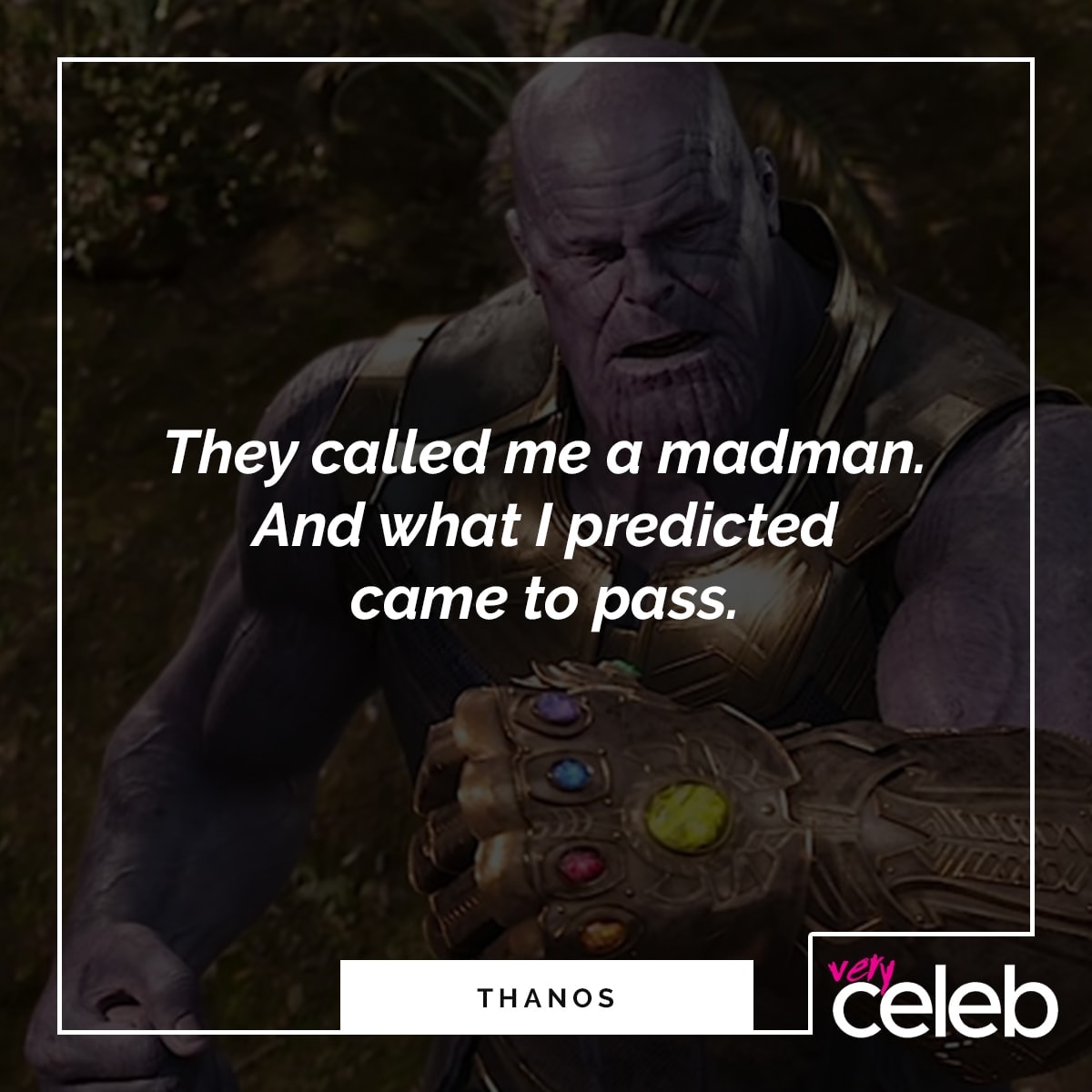 33. “I know what it’s like to lose. To feel so desperately that you’re right, yet to fail nonetheless.”
34. “Little one, it’s a simple calculus. This universe is finite, its resources, finite. If life is left unchecked, life will cease to exist. It needs correcting.”
35. “I thought by eliminating half of life, the other half would thrive, but you have shown me… that’s impossible. As long as there are those that remember what was, there will always be those, that are unable to accept what can be. They will resist.”
36. “No resurrections this time.”
37. “I am… inevitable.”
38. “I’m the only one who knows that. At least I’m the only who has the will to act on it. For a time, you had that same will. As you fought by my side, daughter.” 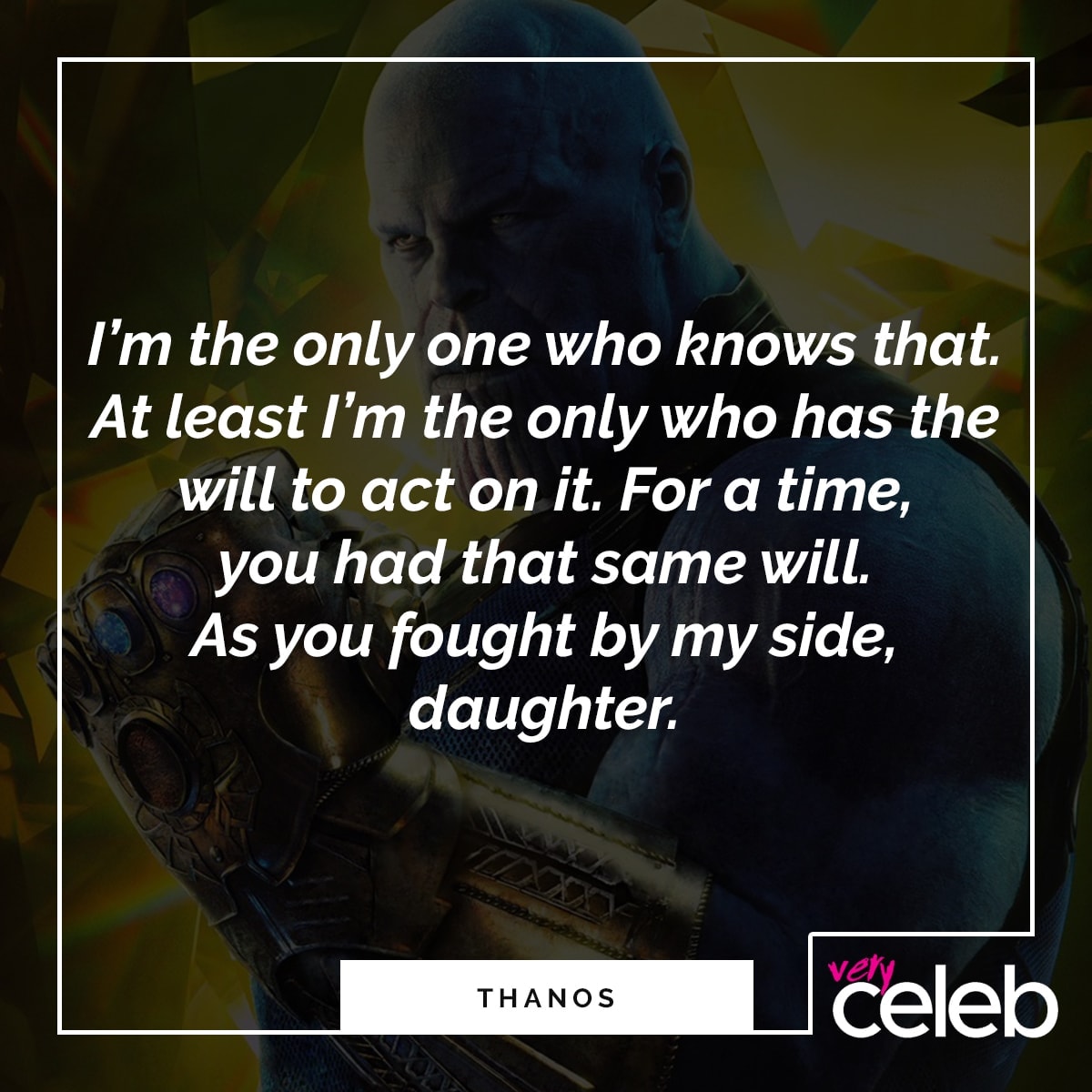 39. “In all my years of conquest, violence, slaughter, it was never personal. But I’ll tell you now, what I’m about to do to your stubborn, annoying little planet… I’m gonna enjoy it. Very, very much.”
40. “Look. Pretty, isn’t it? Perfectly balanced. As all things should be.”
41. “I am disappointed. But not because you didn’t find it… But because you did. And you lied.”
42. “You have my respect, Stark. When I’m done, half of humanity will still be alive. I hope they remember you.”
43. “Destiny waits for no man. Not even one who shall bring the universe to its knees.” 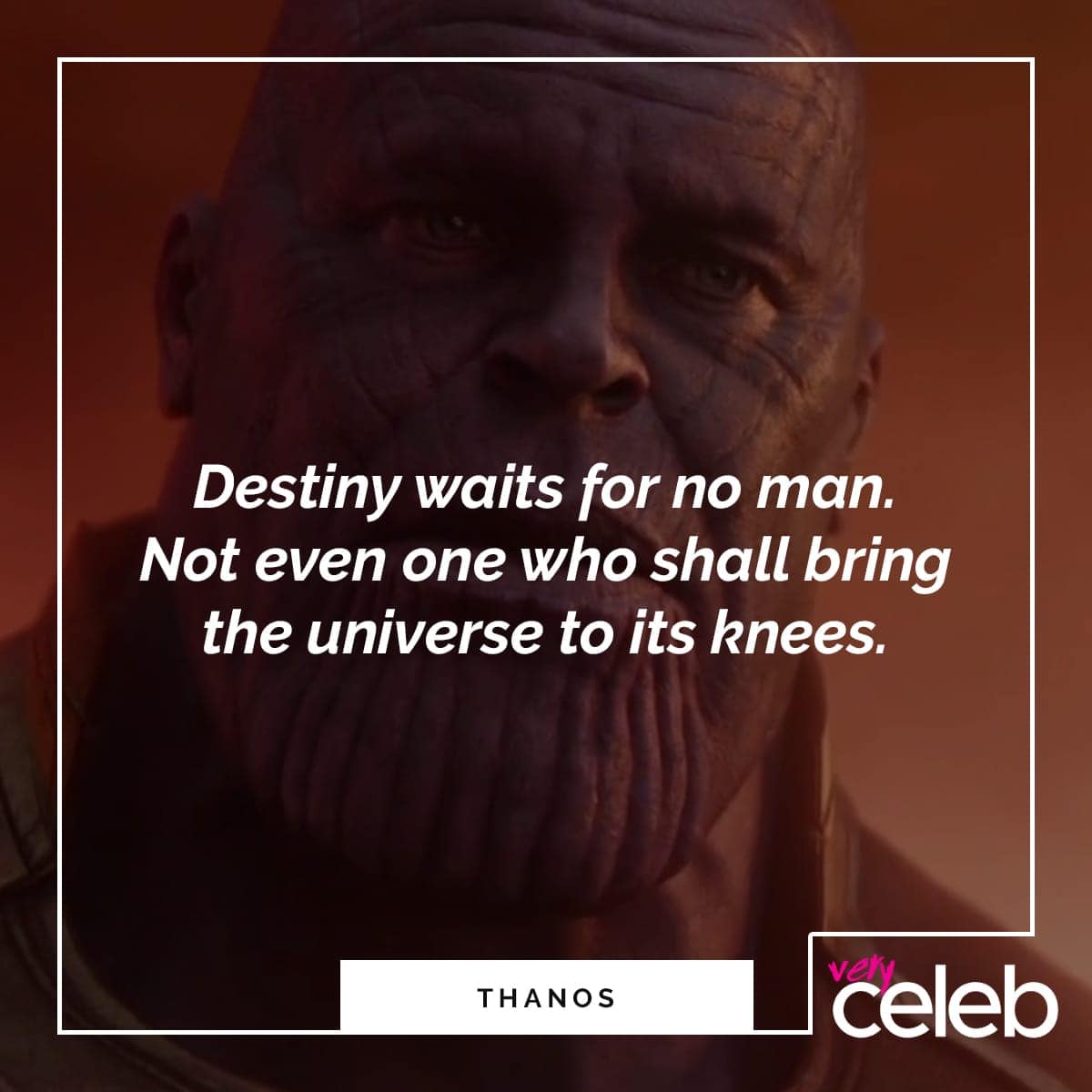 44. “The universe required correction.”
45. “I used the stones to destroy the stones. It nearly… killed me. But the work is done. it always will be.”
46. “I will shred this universe down to its last atom and then, with the stones you’ve collected for me, create a new one. It is not what is lost but only what it is been given… a grateful universe.”
47. “Return to me again, empty-handed, and I will bathe the star-ways in your blood.”
48. “I did not ask for your trust. I demand only your obedience.”
49. “You couldn’t live with your own failure. Where did that bring you? Back to me.” 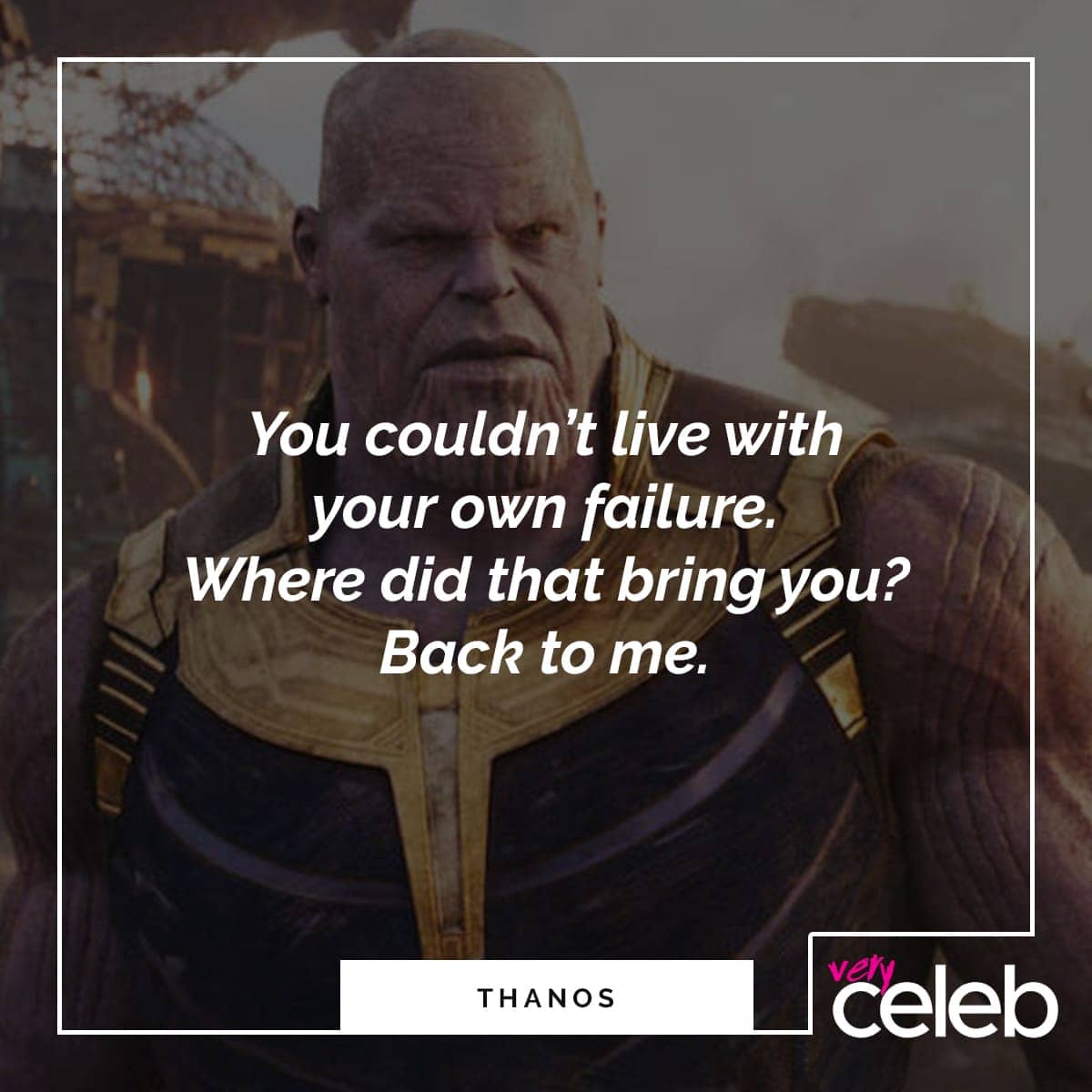 50. “Reality can be whatever I want.”
51. “Undying? You should choose your words more carefully.”
52. “Fun isn’t something one considers when balancing the universe. But this… does put a smile on my face.”
53. “In my heart, I knew you still cared. But one ever knows for sure. Reality is often disappointing.”
In this article:
Up Next: