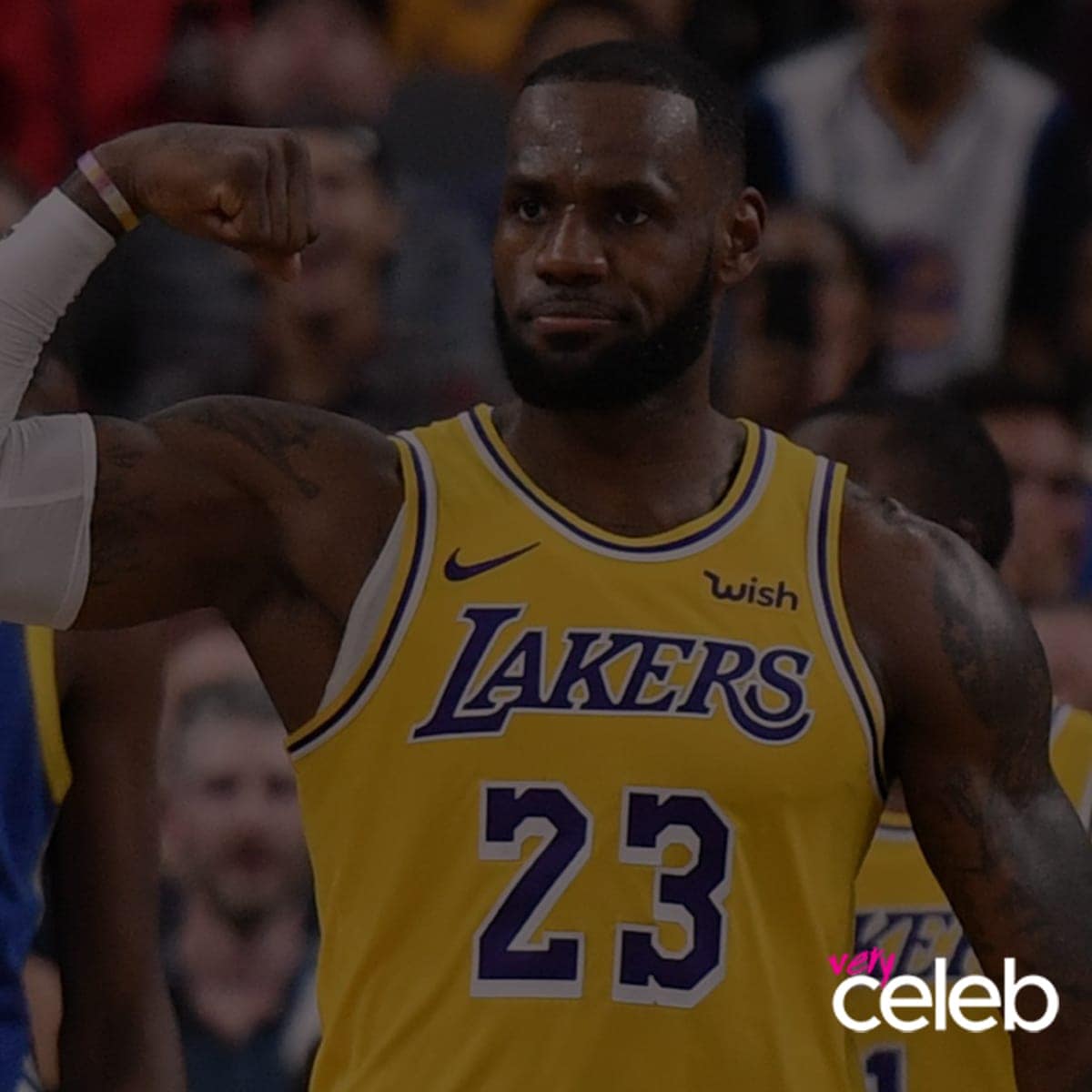 LeBron Raymone James Sr., widely known as LeBron, is an American NBA player, currently playing for the Los Angeles Lakers of the National Basketball Association (NBA). Born December 30, 1984, LeBron James has been given the monicker “King” ever since he became a professional basketball player. Born and raised in Akron, Cleveland, Ohio, the King spent his early professional basketball years playing for the Cleveland Cavaliers. With that team, he was able to take his team and play for an NBA Basketball championship, eventually losing to the team they were up against. Because of this initial setback, LeBron decided that he wanted to be with other basketball players in a team where he could win championship trophies. This led him to join the Miami Heat basketball team where he did win two championships. At that time, LeBron was famous for saying, “I am going to take my talents to South Beach and join the Miami Heat.” People were not so happy with this pronouncement; however, it was one of the best decisions in LeBron’s stellar career as he did win championships.

Still, wanting to give back to the city he grew up in, LeBron rejoined the Cleveland Cavaliers where he did win one championship for his city. After his stint with the Cavaliers, James joined the Los Angeles Lakers, the team he is currently playing for. With another famous basketball player as his partner, Anthony Davis, LeBron James would win a championship with the Lakers in 2020. These days, LeBron James is famous for being in the news as he is known for speaking his mind on things that involve African-Americans and some of the injustices that have come to public attention, and supports many good causes through the charities he runs alongside his wife, Savannah James. A supporter of the youth, King James put up his own school in Cleveland where people have been awed by his works and charitable deeds. LeBron James is also famous for being the star in the sequel of “Space Jam” that had the iconic basketball superstar Michael Jordan in the first sequel. A class act, an inspiring athlete and a successful business name since LeBron has been with the sportswear brand Nike for a long time now; LeBron James will always be one of the most talked about athletes in the planet.

1. “You have to be able to accept failure to get better.” 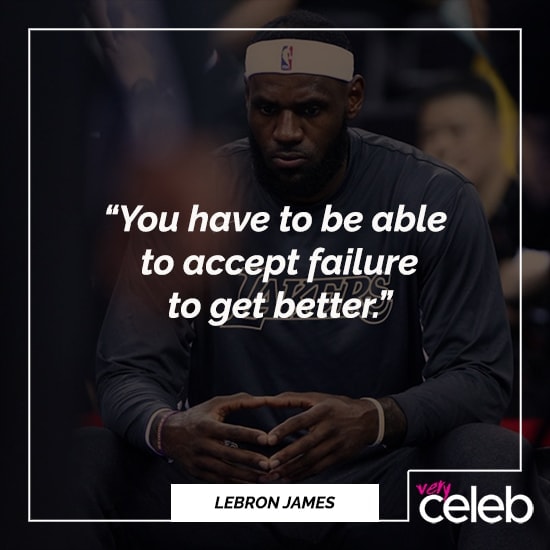 2. “Dream as if you’ll live forever. Live as if you’ll die today.”
3. “The best teacher in life is experience.”
4. “I think the reason why I am who I am today is because I went through those tough times when I was younger.”
5. “I have short goals, to get better every day, to help my teammates every day – but my only ultimate goal is to win an NBA championship. It’s all that matters. I dream about it. I dream about it all the time, how it would look, how it would feel. It would be so amazing.”
6. “I’m going to use all my tools, my God-given ability, and make the best life I can with it.” 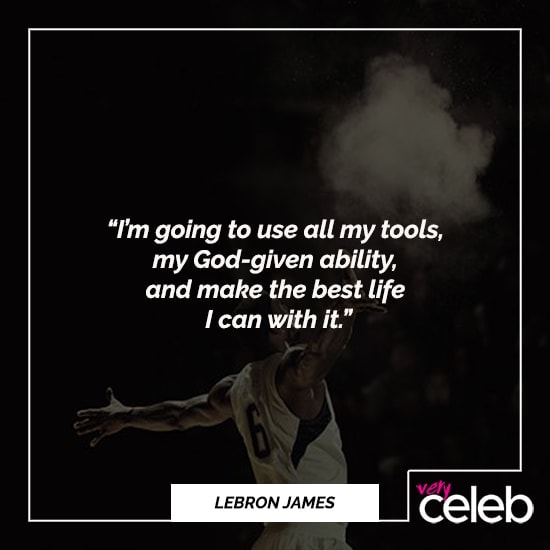 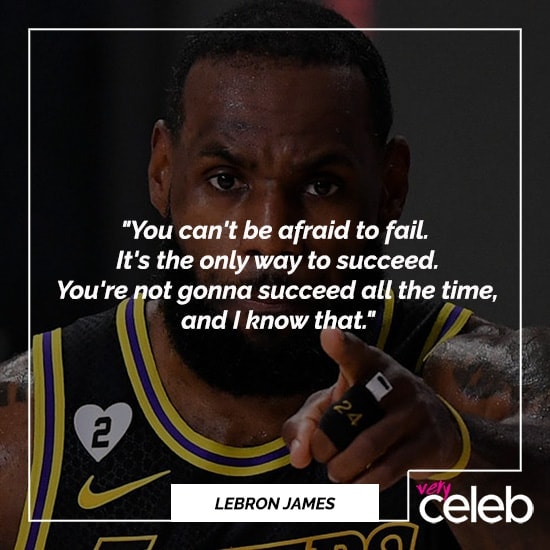 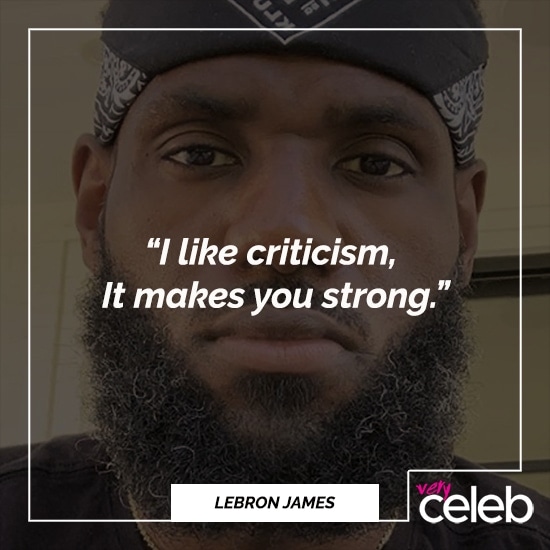 17. “I think, team first. It allows me to succeed, it allows my team to succeed.”
18. “I love the success of my teammates more than my individual achievements. I’ve just always cared more about that since I started playing.”
19. “Warren Buffett told me once and he said always follow your gut. When you have that gut feeling, you have to go with don’t go back on it.”
20. “I always say, decisions I make, I live with them. There’s always ways you can correct them or ways you can do them better. At the end of the day, I live with them.”
21. “Sometimes in the past when I played, something might make me lose focus, or I would go home after a game where I thought I could have played better and I would let it hang over my head for a long time when it shouldn’t. But now, being a parent, I go home and see my son and I forget about any mistake I ever made or the reason I’m upset. I get home and my son is smiling or he comes running to me. It has just made me grow as an individual and grow as a man.”
22. “You know, my family and friends have never been yes-men: ‘Yes, you’re doing the right thing, you’re always right.’ No, they tell me when I’m wrong, and that’s why I’ve been able to stay who I am and stay.”
23.”I treated it like every day was my last day with a basketball.” 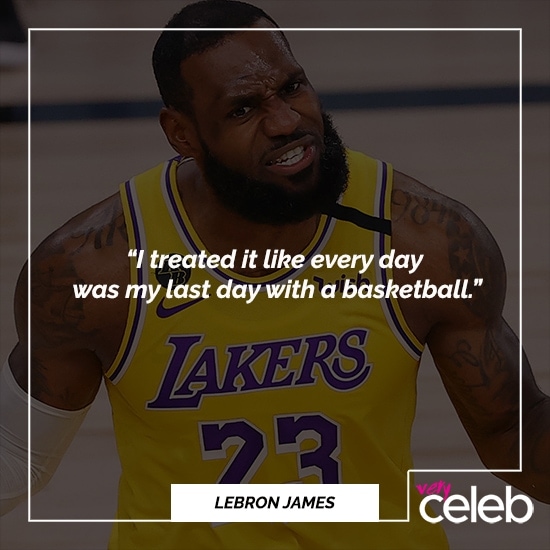 24. “You have to do what’s best for you and what’s going to make you happy at the end of the day, because no one can live with the consequences or anything that comes with your decision besides you.”
25. “There are some teams and logos you see, no matter where you are in the world, and you know exactly who they are and what they mean.” 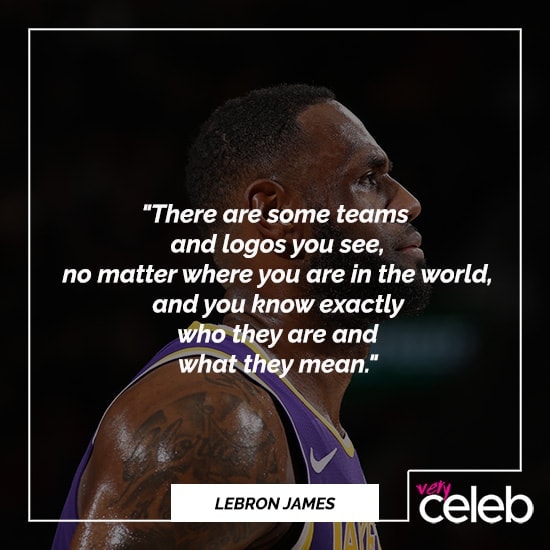 26. “My game is really played above time. I don’t say that like I’m saying I’m ahead of my time. I’m saying, like, if I’m on the court and I throw a pass, the ball that I’ve thrown will lead my teammate right where he needs to go, before he even knows that that’s the right place to go to.”
27. “Once you become a professional athlete or once you do anything well, then you’re automatically a role model… I have no problem being a role model, I love it. I have kids looking up to me and hopefully I inspire these kids to do good things.”
28. “My relationship with Northeast Ohio is bigger than basketball. I didn’t realize that four years ago. I do now.”
29. “Basketball isn’t easy. All my life I’ve been striving to make myself better. It’s a full time commitment. To be the best, you have to work the hardest. You have to chase what seems impossible over and over and over again, because giving up is not an option, and when you feel like you’ve reached your limit, it’s only the beginning, that’s when the time to dig deep, to find the courage to push some more, because if you’ve got the drive, the discipline, and the resolve to do what it takes to make yourself great, then the rewards are endless.”
30. “I told myself if I ever made it to the level I want to be at, I’m gonna give back.” 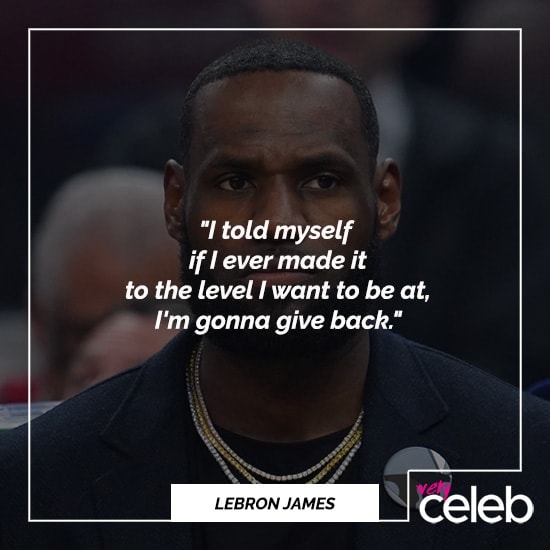 31. “But ever since I was a kid, I was always the winner.”
32. “I’m ready to accept the challenge. I’m coming home.”
33. “Every night on the court I give my all, and if I’m not giving 100 percent, I criticize myself.”
34. “I feel my calling here goes above basketball.”
35. “To being trustworthy? To being successful? How committed are you to being a good father, a good teammate, a good role model? There’s that moment every morning when you look in the mirror: Are you committed, or are you not?”
36. “Ask me to play, I’ll play. Ask me to shoot, I’ll shoot. Ask me to pass, I’ll pass. Ask me to steal, block out, sacrifice, lead, dominate, anything. But it’s not just what you ask of me. It’s what I ask of myself.”
37. “A lot of players know how to play the game, but they really don’t know how to play the game, if you know what I mean. They can put the ball in the hoop, but I see things before they even happen. You know how a guy can make his team so much better? That’s one thing I learned from watching Jordan.”
38. “That’s one of my biggest obstacles, I’m afraid of failure. I want to succeed so bad that i become afraid of failing.” 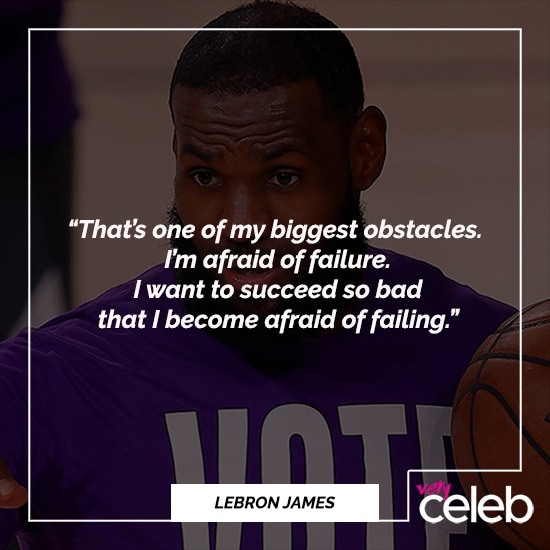 39. “I do Pilates and yoga to stay in front of the curve. I feel like it’s helping me. Does it work for everybody? I don’t know. I’m not a guru on how to be in the best condition. Let me sit here and tell you that. But it works for me.”
40. “If you put every everything together as far as my mind, my body, my game. If you put everything in one bottle, this is probably the best I’ve been.” 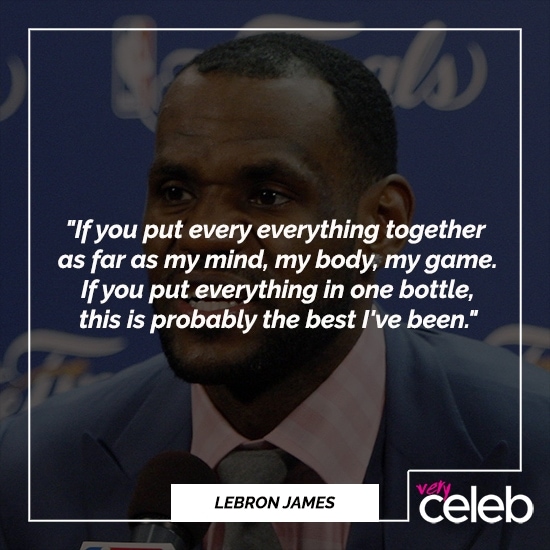 41. “All your life you are told the things you cannot do. All your life they will say you’re not good enough or strong enough or talented enough. They will say you’re the wrong height or the wrong weight or the wrong type to play this or be this or achieve this. They will tell you no. A thousand times no. until all the no’s become meaningless. All your life they will tell you no. Quite firmly and very quickly. And you will tell them yes.”
42. “I hear my friends and my mom tell me I’m special, but honestly, I still don’t get it.”
43. “I won at every level, all the way since I started playing the game of basketball at nine. I’ve won at every level, won championships at every level. And, you know, it won’t be fulfilled until I win at the highest level.” 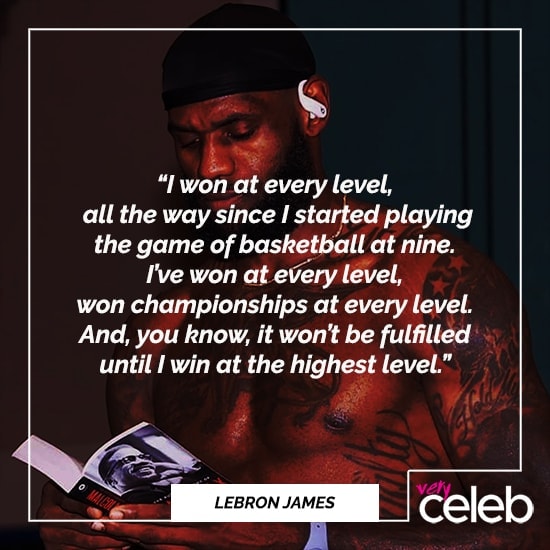 44. “I have short goals – to get better every day, to help my teammates every day – but my only ultimate goal is to win an NBA championship. It’s all that matters. I dream about it. I dream about it all the time, how it would look, how it would feel. It would be so amazing.”
45. “I always say, decisions I make, I live with them. There’s always ways you can correct them or ways you can do them better. At the end of the day, I live with them.”
46. “I’m a pretty funny guy, and I would love to do a comedy with a bunch of funny guys, movie star guys, where they could help me through it.”
47. “In the next 15 or 20 years, I hope I’ll be the richest man in the world. That’s one of my goals. I want to be a billionaire. I want to get to a position where generation on generation don’t have to worry about nothing. I don’t want family members from my kids to my son’s kids to never have to worry. And I can’t do that now just playing basketball.”
48. “You know, when I have a bad game, it continues to humble me and know that, you know, you still have work to do and you still have a lot of people to impress.”
49. “I hate letting my teammates down. I know I’m not going to make every shot. Sometimes I try to make the right play, and if it results in a loss, I feel awful. I don’t feel awful because I have to answer questions about it. I feel awful in that locker room because I could have done something more to help my teammates win.”
50. “I laugh and joke, but I don’t get distracted very easily.” 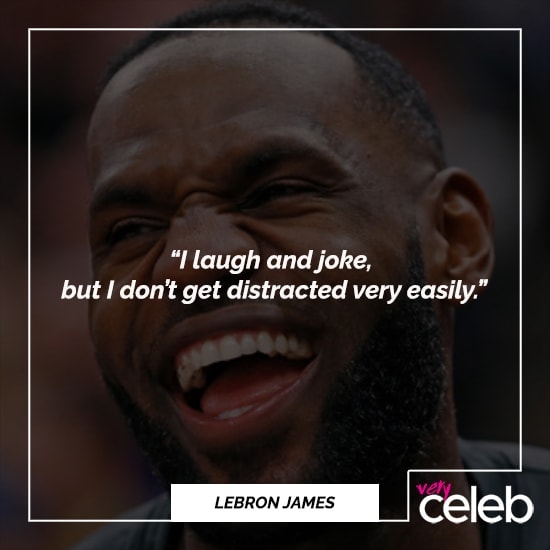