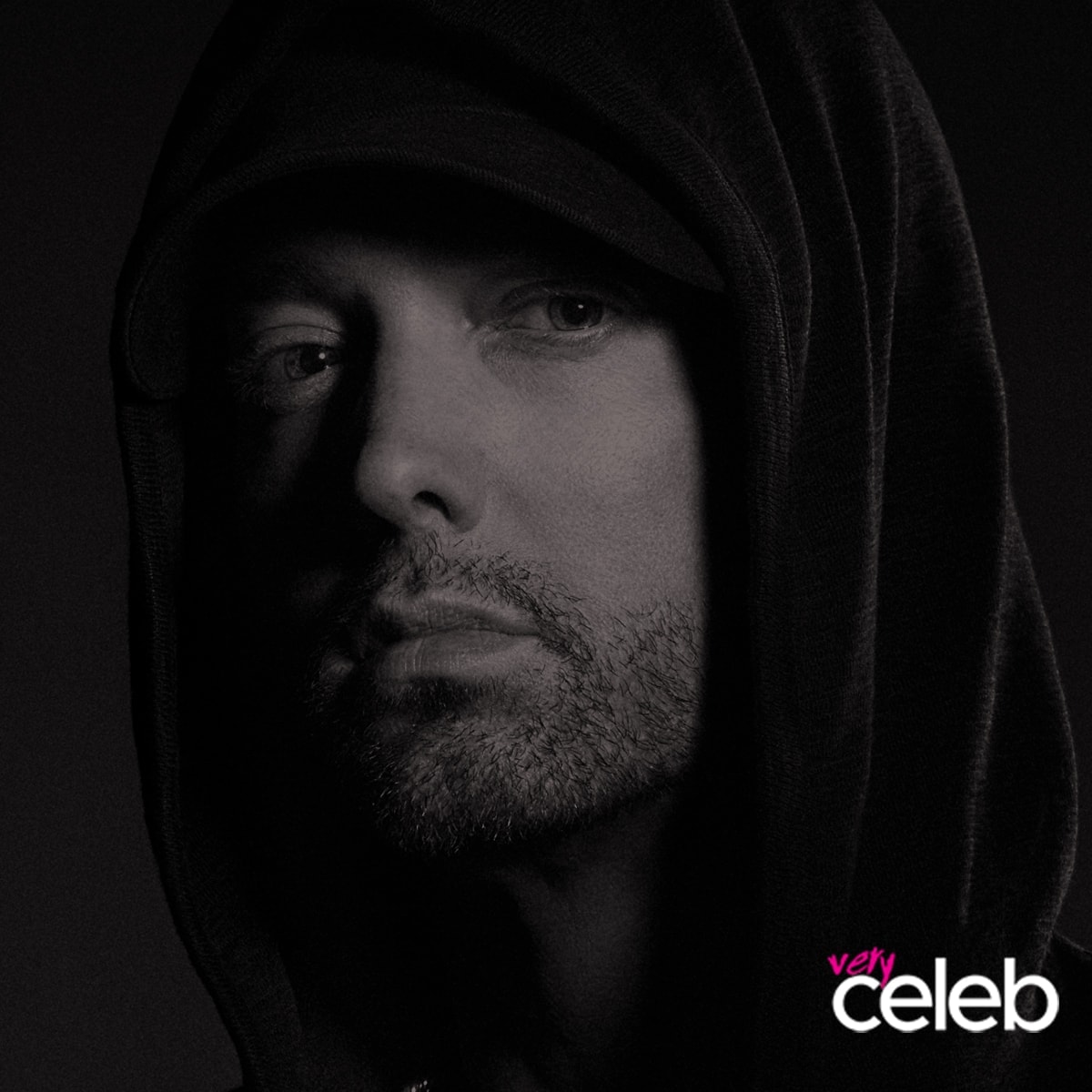 Worldwide, Eminem is known for his one-word name. His real name is Marshall Bruce Mathers, and he was born on October 17, 1972). The American rapper is known for his blockbuster hit songs including The Real Slim Shady, Lose Yourself, Love the Way You Lie, Without Me, and FACK. Eminem was such an icon since the rap scene in mainstream American pop media was mostly dominated by African-Americans. Known for his snobby and cheeky nature, Eminem was a unique presence as his rap songs had spunk and a kind of honest edge that made his albums popular to angsty youngsters and adults. It was perhaps his family struggles, including the adoption of his daughter, Alaina that became fodder for his songs and artistic talent.

Before becoming the famous rapper Eminem, the influential rapper took a number of names including MC Double M in a bid to create a unique persona that would be a novelty in the rap industry. Then when Eminem released his song Real Slim Shady in 1997, he would come out of insignificance and become an overnight success. He would go on to work with famous names in the industry including Dr. Dre who saw how unique and compelling the rapper was. After this, he released a number of albums that became famous such as Marshall Matters LP and The Eminem Show. It could be said that Eminem is one of the best rappers to have risen from the ranks. Here are 50 of the illest Eminem quotes.

1. “You can make something of your life. It just depends on your drive.” 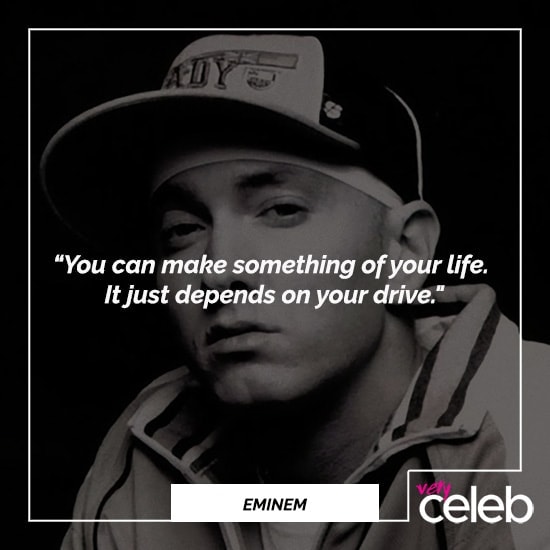 2. “In my mind I’ma fighter, my heart’s a lighter, my soul is the fluid. My flow sparks it right up.”
3. “I say what I want to say and do what I want to do. There’s no in between. People will either love you for it or hate you for it.”
4. “Look, if you had one shot, or one opportunity. To seize everything you ever wanted in one moment. Would you capture it or just let it slip?”
5. “Don’t let them tell you ain’t beautiful.” 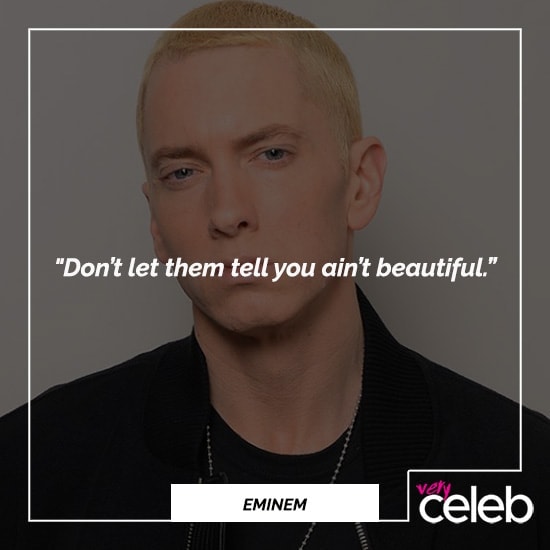 6. “You better lose yourself in the music, the moment. You own it, you better never let it go. You only get one shot, do not miss your chance to blow. This opportunity comes once in a lifetime, yo”
7. “The truth is you don’t know what is going to happen tomorrow. Life is a crazy ride, and nothing is guaranteed.”
8. “If there’s not drama and negativity in my life, all my songs will be really wack and boring or something.”
9. “Love is just a word, but you bring it definition.” 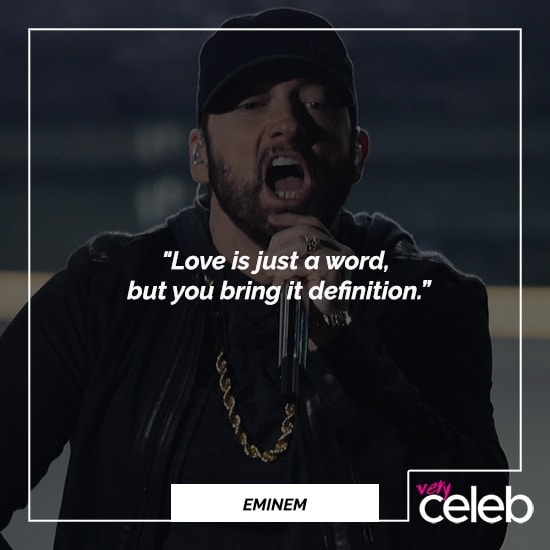 10. “That’s why we seize the moment try to freeze it and own it, squeeze it and hold it.”
11. “You gotta find that inner strength and just pull that s**t out of you. And get that motivation to not give up and not be a quitter, no matter how bad you wanna just fall on your face and collapse.”
12. “Sporadic thoughts will pop into my head and I’ll have to go write something down, and the next thing you know I’ve written a whole song in an hour.”
13. “If people take anything from my music, it should be motivation to know that anything is possible as long as you keep working at it and don’t back down.”
14. “But music is reflection of self, we just explain it, and then we get our checks in the mail.”
15. “Why be a king,when you can be a god?” 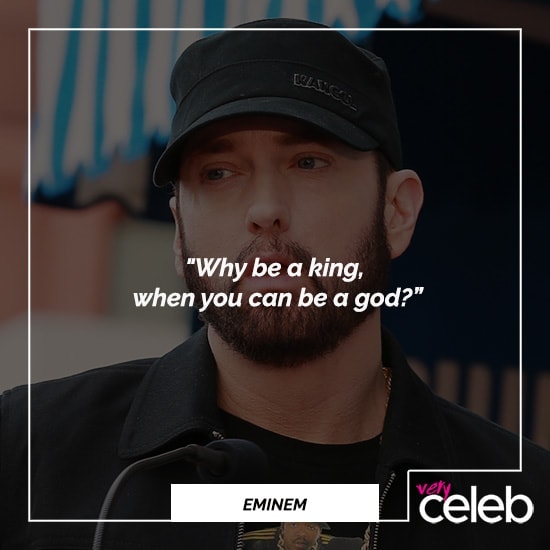 16. “You can try and read my lyrics off of this paper before I lay ’em, But you won’t take the sting out these words before I say ’em”
17. “Nobody likes to fail. I want to succeed in everything I do, which isn’t much. But the things that I’m really passionate about, if I fail at those, if I’m not successful, what do I have?”
18. “Trust is hard to come by. That’s why my circle is small and tight. I’m kind of funny about making new friends.”
19. ” Honestly, I’d love to be remembered as one of the best to ever pick up a mic, but if I’m doing my part to lessen some racial tension I feel good about what I’m doing.”
20. “A normal life is boring.” 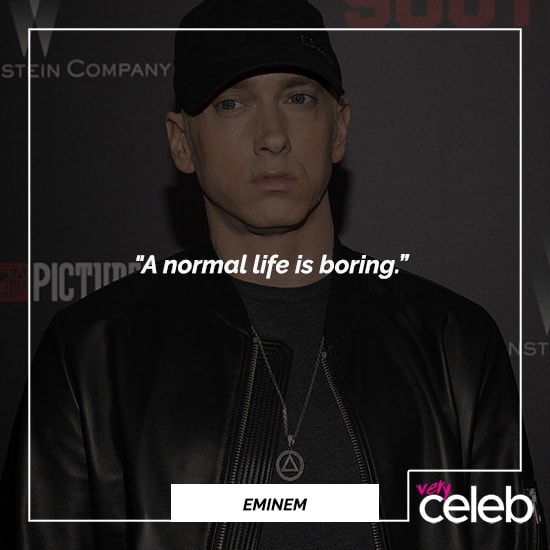 21. “People can try to reinvent themselves. I don’t think you can really change who you are, though, because who you are is pretty much where you came from and what you’ve done up to now.”
22. “Hip-hop is ever changing but you’ll always have the pack. And you’ll always have those people who are separated from the pack.”
23. “The writing process, the way I go about it is I do whatever the beat feels like, whatever the beat is telling me to do. Usually when the beat comes on, I think of a hook or the subject I want to rap about almost instantly. Within four, eight bars of it playing I’m just like, ‘Oh, OK. This is what I wanna do’.”
24. “Be proud of who you are.” 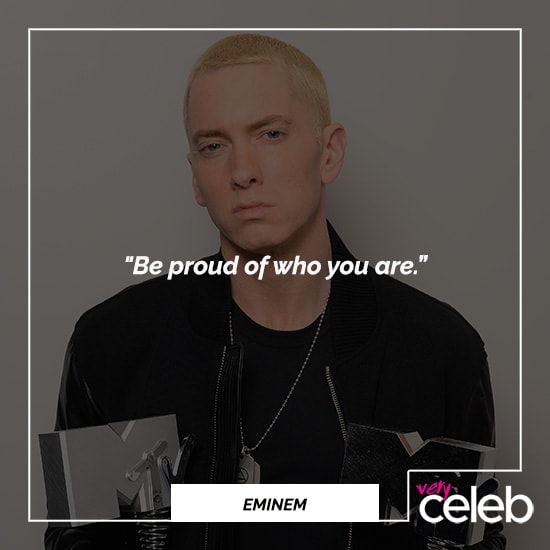 25. “We’ll walk this road together, through the storm. Whatever weather, cold or warm.”
26. “Dealing with backstabbers, there was one thing I learned. They’re only powerful when you got your back turned.”
27. “When you’re a little kid, you don’t see color, and the fact that my friends were black never crossed my mind. It never became an issue until I was a teenager and started trying to rap.”
28. “Yeah, it’s been a ride I guess I had to go to that place to get to this one. Now some of you might still be in that place. If you’re trying to get out, just follow me, I’ll get you there.”
29. “I was poor white trash, no glitter, no glamour, but I’m not ashamed of anything.”
30. “Success is my only option, failure’s not.” 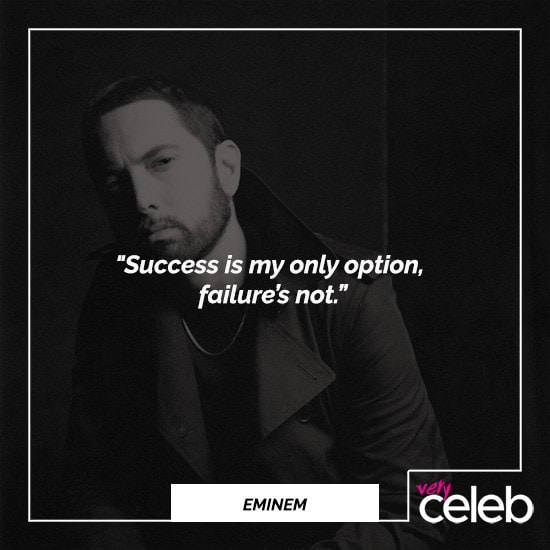 31. “It sometimes feels like a strange movie, you know, it’s all so weird that sometimes I wonder if it is really happening”
32. “Before I was famous, when I was just working in Gilbert’s Lodge, everything was moving in slow motion.”
33. “It was my decision to get clean, I did it for me. Admittedly I probably did it subliminally for you.”
34. “You don’t get another chance. Life is no Nintendo game.” 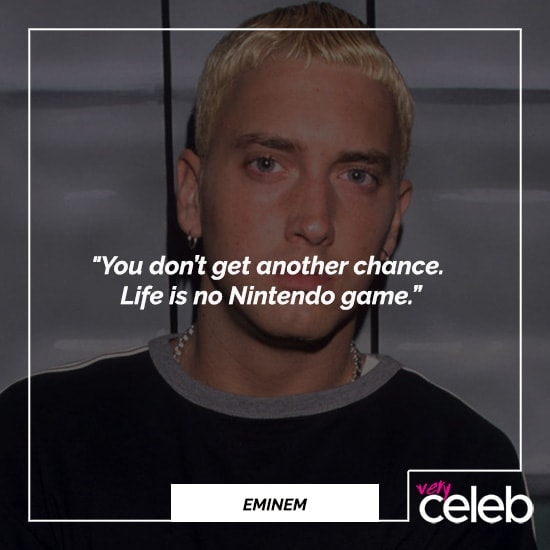 35. “Cause sometimes, you just feel tired. Feel weak. And when you feel weak, you feel like you wanna just give up. But you gotta search within you. You gotta find that inner strength, and just pull that shit out of you. And get that motivation to not give up and not be a quitter.”
36. “I started learning how to not be so angry about things, learning how to count my f—ing blessings instead. By doing that, I’ve become a happier person, instead of all this self-loathing I was doing for a while.”
37. “You’d have to walk a thousand miles in my shoes just to see what its like to be me!”
38. “Everybody has goals, aspirations or whatever, and everybody has been at a point in their life where nobody believed in them…But when I say I’m going to do something, I have to do it.”
39. “I was poor white trash, no glitter, no glamour, but I’m not ashamed of anything.”
40. “Behind every successful person lies a pack of haters.” 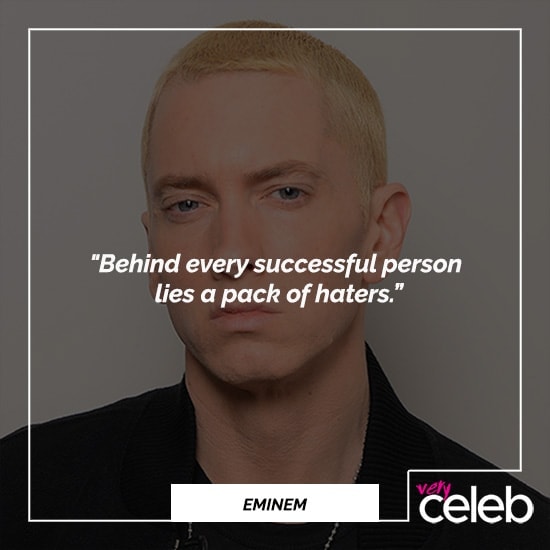 45. “We sing for these kids who don’t have a thing.”
46. “God gave you them shoes to fit you, so put them on and wear them. Be yourself man, be proud of who you are. Even if it sounds corny, don’t let no one tell you, you ain’t beautiful.”
47. “Sometimes I feel like rap music is almost the key to stopping racism.”
48. “I try to treat all the money I’m making like it’s the last time I’m going to make it.”
49. “The moment I used my adversity to my advantage, my career exploded.”
50. “If you have enemies, good that means you stood up for something.” 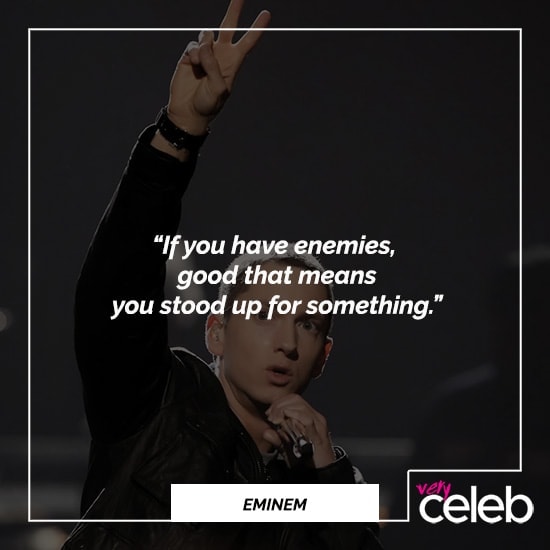 50 Quotes by Elvis Presley That’ll Get You All Shook Up!