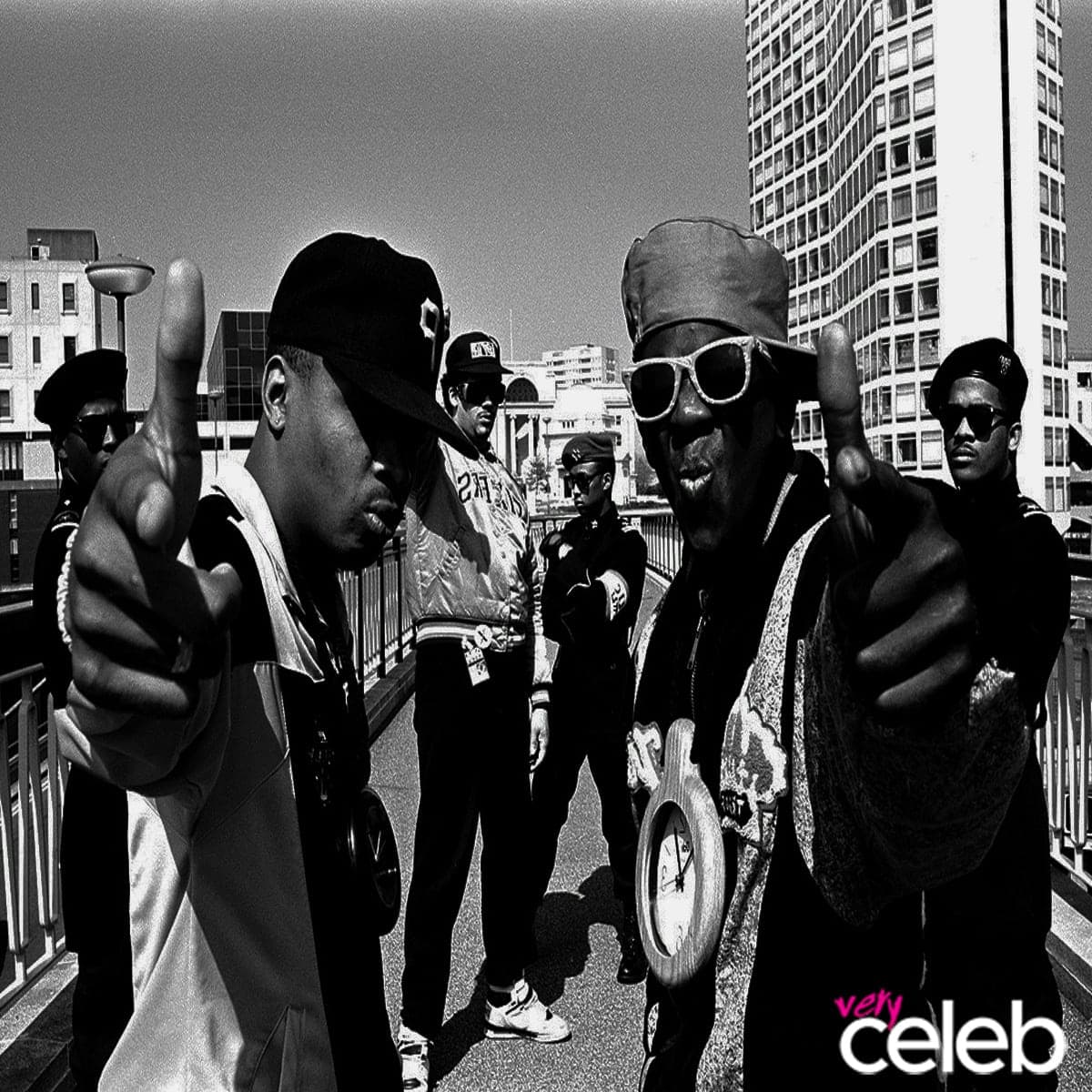 Hip-hop is not just a music genre; it’s a revolution that has continued to evolve as it started from where else but the East and West Coast shores of the United States of America. From what started as backyard rapping and singing get-togethers, hip-hop has immortalized not just songs, dances, trends but artists, celebrities, and groups. In the 1970s, hip-hop was being brewed by the likes of DJ Kool Herk and Grandmaster Flash in the South Bronx. From being an underground movement, it became mainstream through the recordings of Bootleg and Sugarhill in downtown New York. Soon, Run-D.M.C. would rule the waves as Public Enemy wielded hip-hop as a force of bringing change and consciousness in what was happening in the American streets. These all led to hip-hop giving birth to gangsta music.

With hip-hop becoming a force that has ruled the airwaves and the mindset and consciousness of people, other names would soon follow, including the liked of Jay-Z, Puff Daddy, and Notorious B.I.G. They rose together with the women who made one successful hip-hop record after another. There was Queen Latifah, Monie Love, Sal-N-Pepa, Lauryn Hill and now Lil’Kim. The list actually goes on and on, and the money, record deals, fame and fortune of these people behind hip-hop continue to grow. It could be said that hip-hop started from the blues and as songs of struggles from the poor African slaves that came to America. Whatever the case or history maybe, hip-hop resonates with people whatever race, religion, or belief system they may have or be!

1. “You can make something of your life, it just depends on your drive.” – Eminem 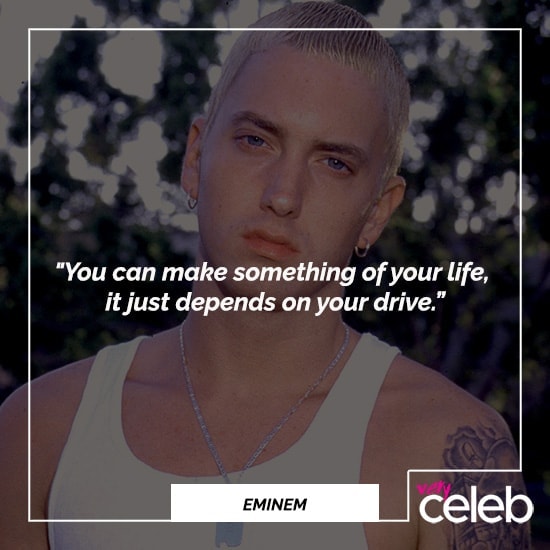 2. “You’ve got enemies? Good, that means you actually stood up for something.” – Eminem
3. “If people take anything from my music, it should be motivation to know that anything is possible as long as you keep working at it and don’t back down.” – Eminem
4. “Sometimes you just gotta let s*** go and say ‘to hell with it’ and move on.” – Eminem
5. ”They say love is the key. Somebody changed the lock.” – Lil Wayne 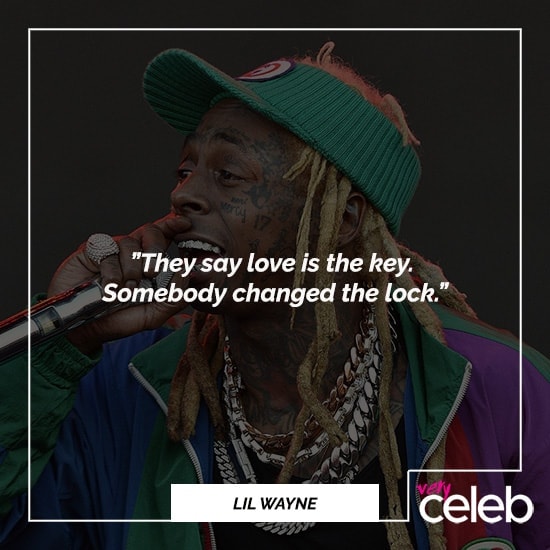 6. “If you don’t love me somebody else will.” – Lil Wayne
7. “I remember the love right after the fights. You can’t tell me you don’t remember those nights.” – Lil Wayne
8. “Women are the most beautiful yet difficult beings known to man.” – Lil Wayne
9. “I’ll be your best friend, if you promise you’ll be mine.” – 50 Cent 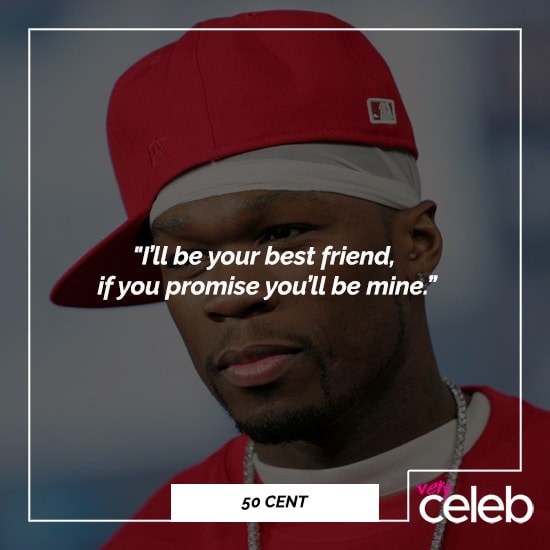 10. “My making it is a combination of grinding, grinding, grinding, and being lucky enough to finally get a shot.” – Busta Rhymes
11. “I’m the type to swallow my blood before I swallow my pride.” – 50 Cent
12. “Sunny days wouldn’t be so special, if it wasn’t for rain. Joy wouldn’t feel so good, if it wasn’t for pain.” – 50 Cent
13. “Funny how the love be fake, but I ain’t stressing. Thankful for the love that’s genuine, appreciate the blessing.” – Busta Rhymes
14. “I love you like a fat kid loves cake.” – 50 Cent
15. “Life without dreaming is a life without meaning.” – Wale 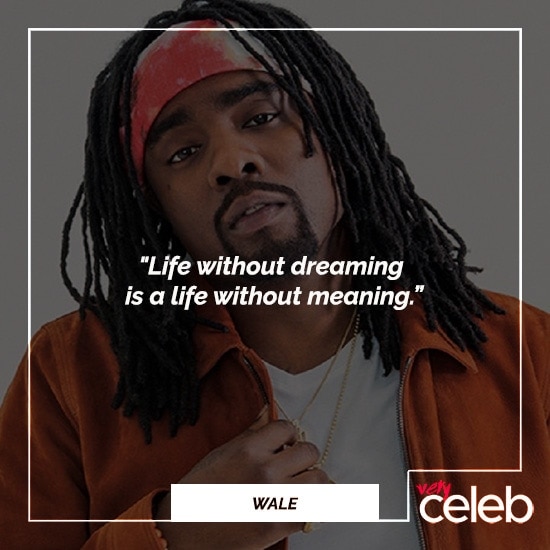 16. “Rather lose love than to move on never knowing what it felt like.” – Wale
17. “Ambitious girl, you just wanna win and you’d rather chase your dreams, then to try chase these men that try to chase these skirts, that try to chase these shots with flavors that ain’t even as sweet as her.” – Wale
18. “Ice melts into rain, love turns into pain. Here I go again, falling in love again.” – Wale
19. “I like the person that you are, but I’m in love with the person that you have potential to be.” – Wale
20. “Remind yourself, nobody’s built like you. You design yourself.” – Jay Z 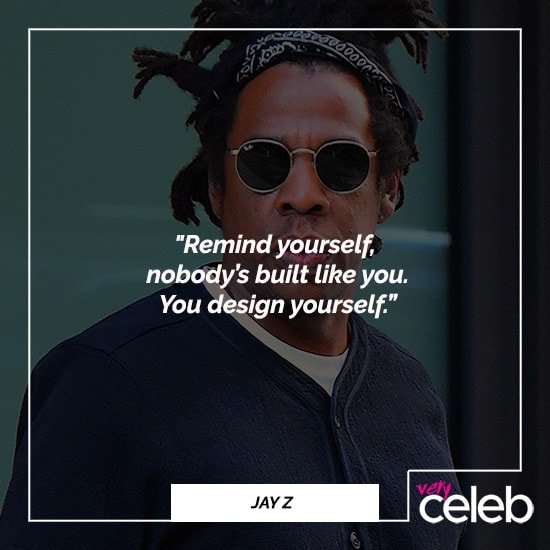 21. “They say you can’t turn a bad girl good. But once a good girl’s gone bad, she’s bad forever.” – Jay Z
22. “Be more concerned with your character than your reputation. Because your character is what you really are. While your reputation is what others merely think you are.” – Jay Z
23. “Only God can judge me, so I’m gone, either love me or leave me alone.” – Jay Z
24. “My life, my choices, my mistakes, my lessons, not your business.” – Kid Cudi 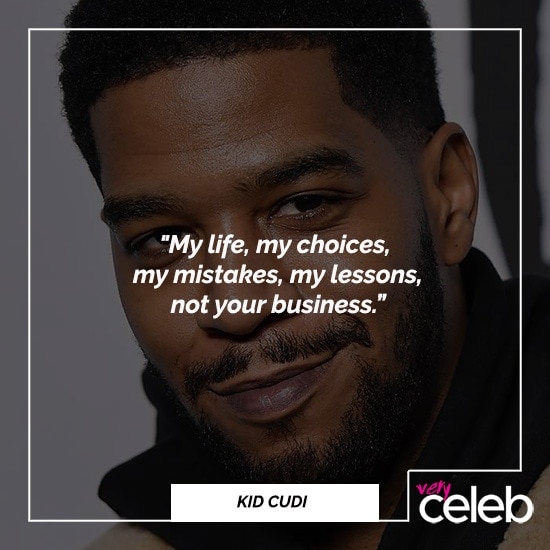 25. “If you can’t do what you imagine, then what is imagination to you?” – Kid Cudi
26. “People say that bad memories cause the most pain, but it’s actually the good ones that drive you insane.” – Kid Cudi
27. “The sooner you realize things will never be the same, the sooner you can move on.” – Kid Cudi
28. “I’m on the pursuit of happiness. I know everything that shines ain’t always gold. I’ll be fine once I get it, I’ll be good.” – Kid Cudi
29. “Living life is a choice. Making a difference in someone else’s isn’t.” – Kid Cudi
30. “How many people you bless, is how you measure success.” – Rick Ross 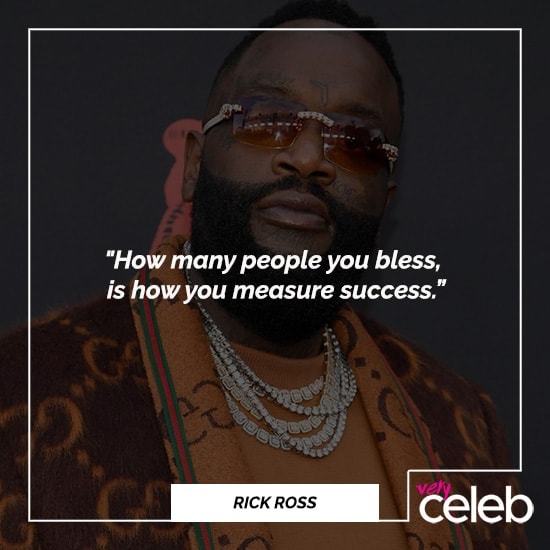 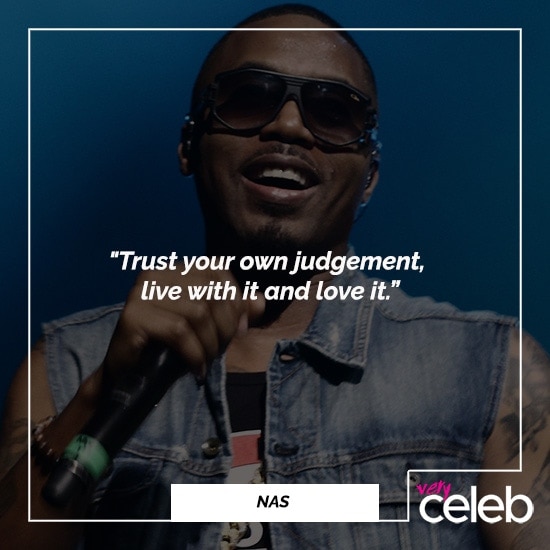 35. “What do you base your happiness around? Material, women, and large paper? That means you’re inferior, not major.” – Nas
36. “Everything will eventually come to an end. So try to savor the moments, cuz time flies, don’t it? The beauty of life is to make it last for the better. Cuz nothing lasts forever.” – Nas
37. “You have to keep your vision clear, cause only a coward lives in fear.” – Nas
38. “I never brag, how real i keep it, cause thats the best secret.” – Nas
39. “Play it cool, that’s the old school rule man.” – Nas
40. “Good things come in good time.” – Wiz Khalifa 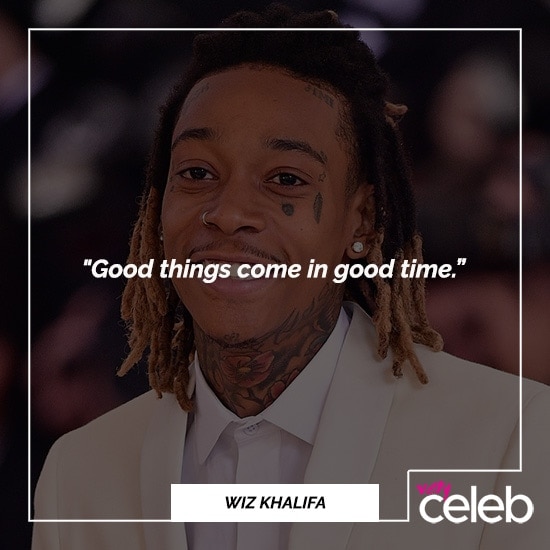 41. “You don’t need too many people to be happy. Just a few real ones who appreciate you for who you are.” – Wiz Khalifa
42. “Worrying is stupid. It’s like walking around with an umbrella waiting for it to rain.” – Wiz Khalifa
43. “A man who treats his woman like a princess is proof that he has been born and raised in the arms of a queen.” – Wiz Khalifa
44. “Jealousy is just love and hate at the same time.” – Drake 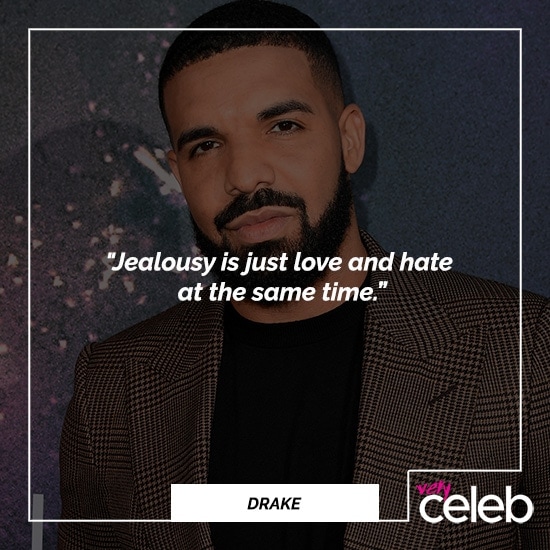 45. “The worst feeling is feeling unwanted by the person you want the most.” – Drake
46. “One day you’re gonna remember me and how much I love you… then you’re gonna hate yourself for letting me go.” – Drake
47. “We always ignore the ones who adore us, and adore the ones who ignore us.” – Drake
48. “I’m always going to work like I have something to prove.” – Drake
49. “Memories have to be our most painful blessing.” – Kanye West 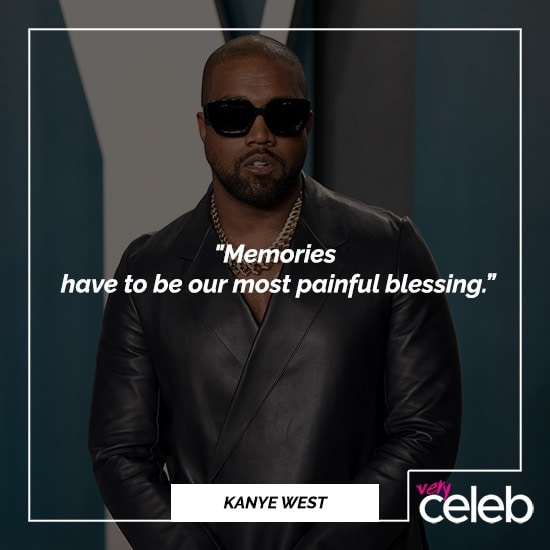 50. “I could let these dream killers kill my self-esteem, or use my arrogance as a steam to power my dreams.” – Kanye West
51. “If you admire someone, you should go ahead and tell them. People never get the flowers while they can still smell them.” – Kanye West
52. “We all self-conscious.  I’m just the first to admit it.” – Kanye West
53. “Living well eliminates the need for revenge.” – Kanye West
54. “Believe in your flyness, conquer your shyness.” – Kanye West
55. “Nothing in life is promised except death.” – Kanye West
In this article:
Up Next:

40+ Insightful Quotes from Charles Darwin, the Father of Evolution