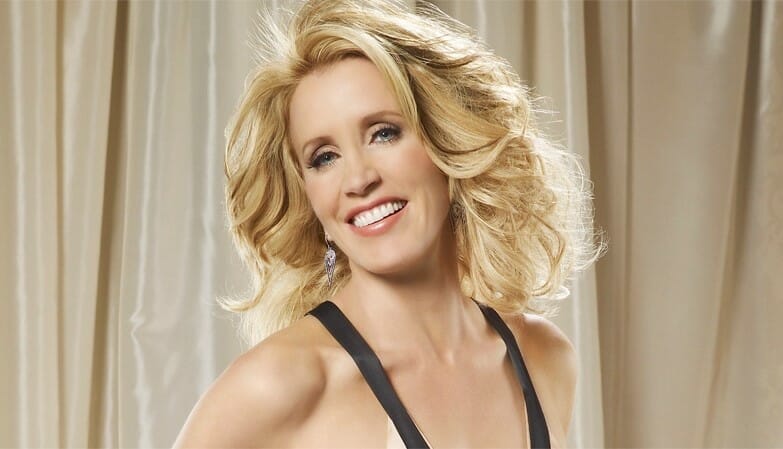 Felicity Kendall Huffman was born in Bedford New York. Her mother Grace Valle is an actress while her father Moore Peter Huffman is a banker. Her parents were divorced when she was still an infant, and the young Felicity was raised by her mother in Putney, New York. When she was around 13 years of age, she discovered that her father was actually family friend Roger Tallman Maher.

Huffman comes from a large family and has seven siblings. When her mother decided to leave New York, she and her six sisters and a brother spent the remainder of their childhood in Snowmass, Colorado.

Huffman earned her Bachelor of Fine Arts degree in drama at the University of New York, and hit the Broadway stage running in 1988 with Speed the Plow. In the same year, she starred in the films Lip Service and Things Change, going on to appear as Annie in the Heart of Justice (1992) and Maclin in Harrison: Cry of the City (1996) as Peggy. She rapidly became a household name playing Lynette Scavo in the ABC series, Desperate Housewives (2004-2012). Not content with her success on screen, Huffman co-authored “A Practical Handbook for the Boyfriend”.

Huffman received accolades for her roles in front of the camera and on stage. She won the 1994-95 OBIE Award for her role as Donny in the theatre production of The Cryptogram (1995-1996), followed by an Emmy, two Screen Actors Guild Awards for Best Actress, and Part of Best Ensemble for a Comedy Series in her role in Desperate Housewives. She also took home a Golden Globe Award for Best Actress for Transamerica and received her Hollywood Walk of Fame in 2009 with her husband William H. Macey.

What happened to Felicity Huffman?

As well as her fame as a successful actress, Huffman has also man headlines for a role of a different kind. She played a role in the widely publicized college entrance exam cheating scandal. Charged by the Attorney’s Office and FBI in March 2019, Huffman allegedly donated $15,000 to Key Worldwide Foundation, which resulted in a stand-in taking her daughter Sophia’s SAT exam.

Formally pleading guilty to honest services fraud in May of the same year, she was sentenced to a fine of $30,000, two weeks of incarceration, and 250 hours of community service. Her husband, Macy has avoided any charges.

#FelicityHuffman actually pled guilty pretty early on after getting indicted for paying $15,000 to increase her daughter’s SAT score. Allegedly, her daughter didn’t know Huffman boosted her scores; she actually re-took the SAT on her own and got into Carnegie Mellon… Felicity. pic.twitter.com/CKAvtOV4OF

Who is Felicity Huffman’s husband?

Felicity Huffman’s husband is William H. Macy. William is an actor, screenwriter, teacher, and director in theatre, film, and television. He is known for his roles in Fargo (1996), Magnolia (1999), and Shameless (2011). He won two Emmy Awards and a Screen Actors Guild Award and has been nominated for nine Emmy Awards, seven Screen Actors Guild Awards, and three Golden Globe Awards 😲😲😲

What is Felicity Huffman’s nationality?

Born in the small town of Bedford in New York, Felicity Huffman is American.

How tall is Felicity Huffman and how much does she weigh?

What is Felicity Huffman’s estimated net worth?

Felicity Huffman’s estimated net worth is 50 million USD.  She gained her wealth from her career as a hugely successful actress. She owns a luxurious house worth 4 million USD in Los Angeles and has several cars. Earning 275,000 USD per episode in Desperate Housewives, she appeared in 180 episodes, giving her a whopping … well, you work it out 🤑🤑🤑

How old is Felicity Huffman?

Felicity Huffman is 60 years old. Born in December, under the sign of the hunter – Sagittarius accounts for her determination and drive to do well in every endeavor.

Is Felicity Huffman single or married?

Felicity Huffman is married to a fellow actor William H. Macy. They have been married for 20 years after having an on-and-off relationship for 15 years. They met at Atlantic Theatre Company in New York City in the early 1980s and finally got married on September 6, 1997.

How many kids does Felicity Huffman have?

Previously on Desperate Housewives… 🍎 Ran into @FelicityHuffman (from my favorite show of ALL TIME) who was at the same gay bar watching @rupaulsdragrace last night! 💄❤️ I forgot to ask who she was rooting for though… 🤔 #RPDR pic.twitter.com/0eWXziaboy

Blake Jenner: The Truth About the Abuse Claims

Stephen Root – You Won’t Believe Who He Voices!