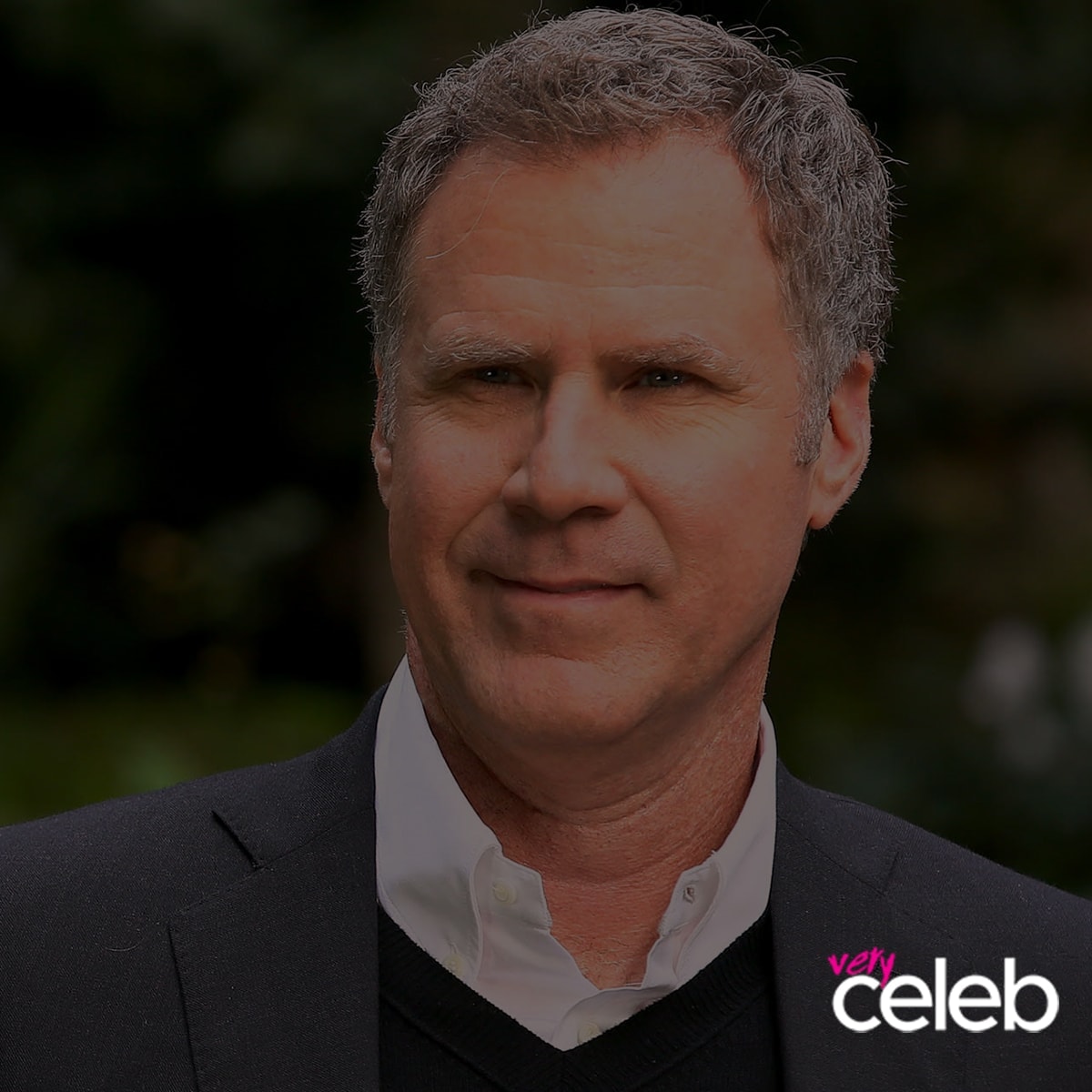 Will Ferrell whose full name is John William Ferrell was born on July 16, 1967.  Being one of the most recognizable American comedians, Will is a highly decorated and established actor. He is a member of the famous Frat Pack group of comedians who came to prominence in the mid 90s. Comedic actors of the Frat Pack include the likes of Ben Stiller, Luke Wilson, Paul Rudd, Steve Carell, and Vince Vaughn, just to name a few. Although these actors are as prominent as Will, his style of comedic acting is unique, sometimes looking to be innocent and at times, raw and bullish. He has had one blockbuster comedy film after another, and some of the most famous include Semi-Pro, Stranger Than Fiction, and Anchorman: The Legend of Ron Burgundy. All of these films are apart from the others where he has starred with other hall-of-fame comedians like him. Many can remember Ferrell as well in Austin Powers, Megamind, Zoolander 2, and the Lego Movie sequels.

A successful voice actor, Will Ferrell started his career in the breeding ground for successful comedians, Saturday Night Live. For seven years, he was part of the show. He has received nominations and awards for his greatness. He has a strong career acting on stage, and he is a well-known sport aficionado. So much could be said of the great comedian and actor that it is worth picking his mind through reading some of his famous quotes, so without further ado, here are our top 50 quotes from funnyman Will Ferrell.

1. “Anyone who does anything creative is always gonna want to change.” 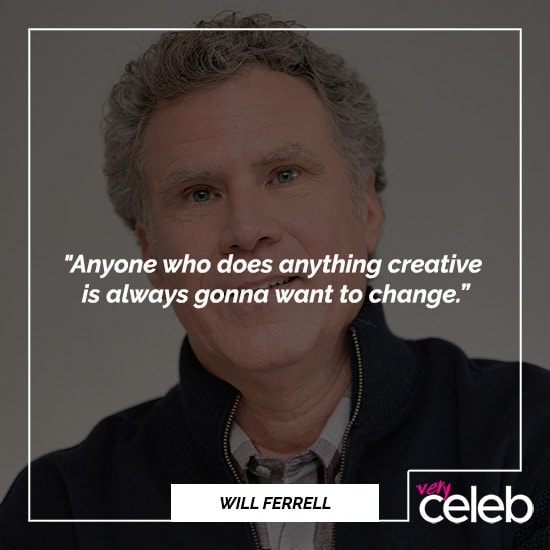 2. “I always find it actually funny that the analysis is that the characters I play in comedies are the manchild, the adolescent, characters that refuse to grow up. And yet, if you look back in the history of comedy all the way back to the Marx brothers, that’s a big part of comedy.”
3. “I was a strange kid in that, while most kids hate school and want to turn 18 or 21, I loved high school.”
4. “I’m a selective packrat. There’s some things I have no problem getting rid of and others I hold onto dearly.”
5. ”I guess ultimately a lot of comedians just wanna be taken seriously.” 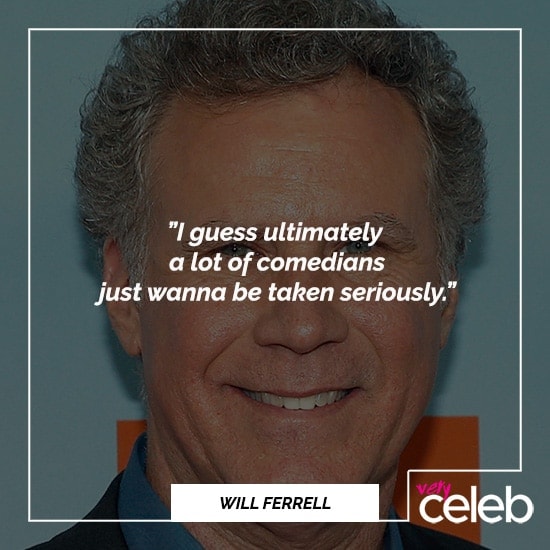 6. “You still have that competitive thing where you want to try to make hits. That won’t go away, unless the mayor of show business says my time’s up.”</
7. “I grew up in an entertainment family, and so I saw how susceptible you are to the ups and downs of this business.”
8. “I have only been funny about seventy-four percent of the time. Yes I think that is right. Seventy-four percent of the time.”
9. “Aren’t we all striving to be overpaid for what we do?” 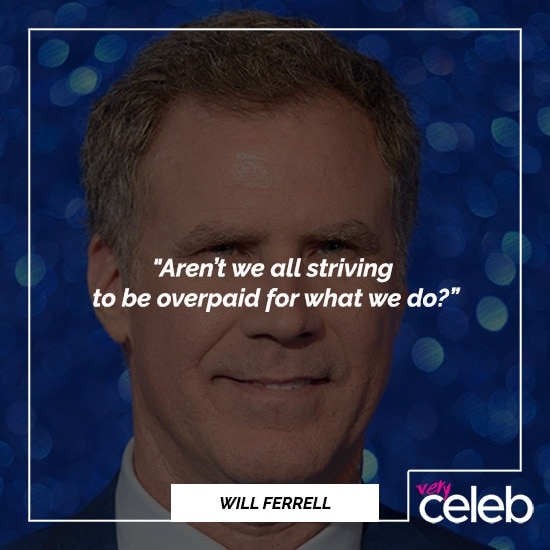 10. “All you have in comedy, in general, is just going with your instincts. You can only hope that other people think that what you think is funny is funny. I don’t have an answer but I just try to plough straight ahead.”
11. “Before you marry a person you should first make them use a computer with slow internet to see who they really are.”
12. “I left home to go to college, and then I moved back home. I moved back for three years from 21 to 24.”
13. “I would love to play Simon Cowell in a movie – heck, I would love it. It would be my dream role.”
14. “In junior high P.E., I was way too shy to take a shower in front of the other kids. It was a horribly awkward time – body hair, odors… So I’d go from my sweaty shirt back into my regular clothes and have to continue the day.”
15. “I love playing the macho guy who looks like an idiot.” 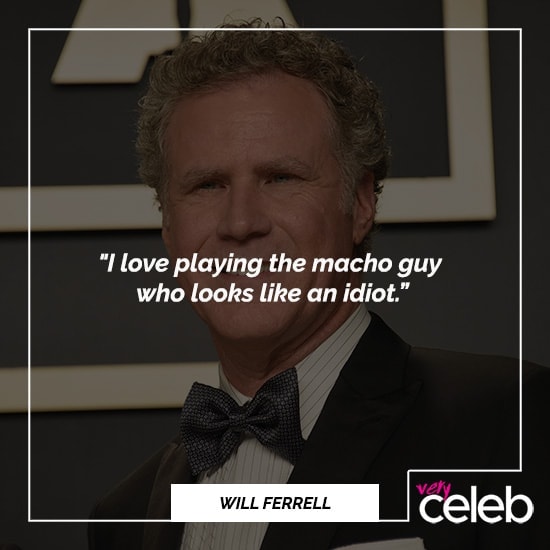 16. “In the fourth grade, I learned how to fake walking into a door. You know, you hit it with your hand and snap your head back. The girls loved it.”
17. “Oftentimes I’m confronted with a quote that I don’t remember saying. So, on one hand, it’s very flattering, it is just so surreal.”
18. “My dad turned me onto Peter Sellers as a kid. I loved the fact that he was a unique combination of being extremely subtle and over-the-top all at the same time, and that’s a hard thing to do. I admire that.”
19. “Saturday Night Live is such a comedy boot camp in a way, because you get to work with so many different people who come in to host the show and you get thrown into so many situations and learn how to think on your feet, so filmmaking actually feels slow, in a good way.”
20. “One day I’ll get you over that wall of anger, and it will be glorious!” 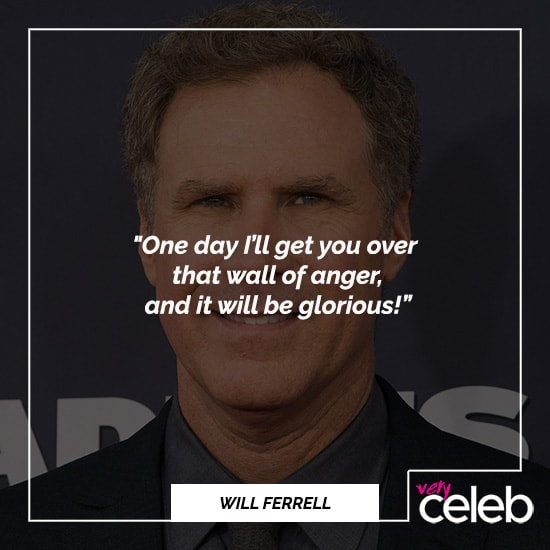 21. “It’d be great to be in a position where you can make choices regardless of money. My tastes are always gonna lead me to go for the amazing project where I’m being paid in Turkish cantaloupes.”
22. “I’ve always had, when I needed it, an extreme amount of focus that I could put into something. That has served me well.”
23. “I swear, I’m so pissed off at my mom. As soon as she’s of age, I’m putting her in a home.”
24. “It’s very easy for me to play silly, but to reveal something closer to you, that’s so much harder.” 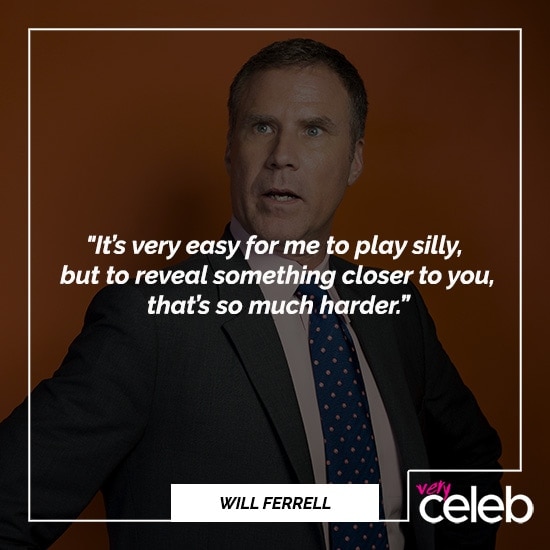 25. “I think a lot of the instincts you have doing comedy are really the same for doing drama, in that it’s essentially about listening. The way I approach comedy, is you have to commit to everything as if it’s a dramatic role, meaning you play it straight.”
26. “I always just forced myself to do crazy things in public. In college I would push an overhead projector across campus with my pants just low enough to show my butt. Then my friend would incite the crowd to be like, ‘Look at that idiot!’ That’s how I got over being shy.”
27. “Here’s the deal I’m the best there is. Plain and simple. I wake up in the morning and I piss excellence.”
28. “I’ve never been a conceited person or cocky, never felt boastful, but I always had a sense of self-worth; I always had a real sense of myself.”
29. “I’ve always loved watching the news on TV. As a kid, I loved watching Walter Cronkite, for some reason.”
30. “Don’t act like you’re not impressed.” 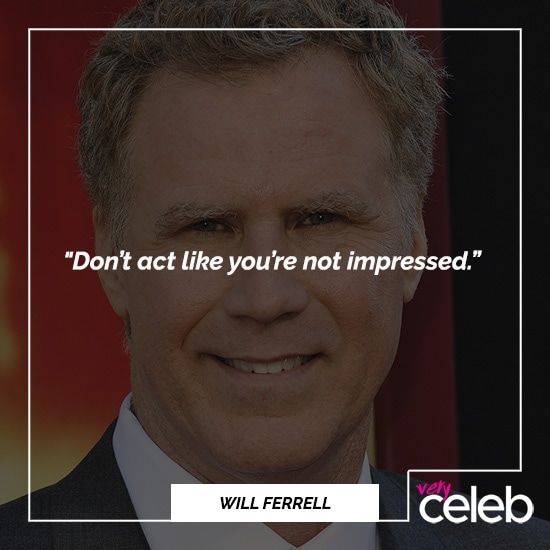 31. “Enjoy the little fun things – like taking your kids to school – before they’re all grown up.”
32. “Help me Jesus! Help me Jewish God! Help me Allah! Help me Tom Cruise! Tom Cruise, use your witchcraft on me to get the fire off me!”
33. “I did plenty of jobs that I hated. I was a bank teller and terrible at it. I parked cars, a valet. I answered phones. I somehow avoided being a waiter. I knew I wouldn’t be able to keep the order straight. I’m not much of a multi-tasker.”
34. “Matt Lauer can suck it!” 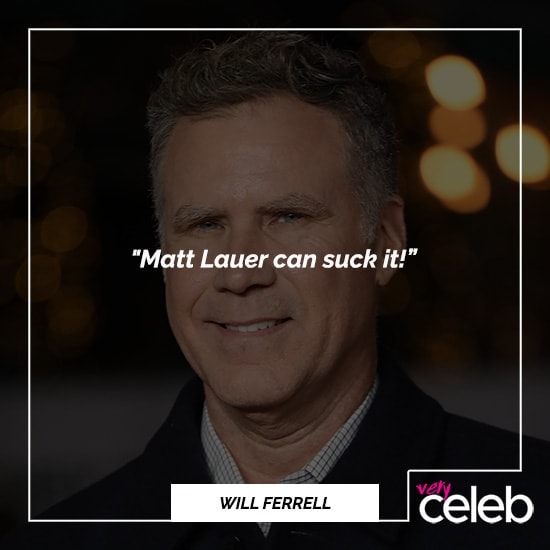 35. “I hate when someone drives my car and resets all the radio presets. I don’t understand it. If I was ever driving someone’s car, I would never touch the things that were set.”
36. “One of my first memories of being a kid was, ‘I want to have a real job when I grow up.’ And to me that meant you wear a suit and a hat and carry a briefcase and go to your job.”
37. “We elves try to stick to the four main food groups: candy, candy canes, candy corns and syrup.”
38. “When I was ten, I wrote an essay on what I would be when I grew up and said I would be a professional soccer player and a comedian in offseason.”
39. “No, you go to hell, and while you’re there, why don’t you grab me a juice box!
40. “It’s so damn hot… milk was a bad choice.” 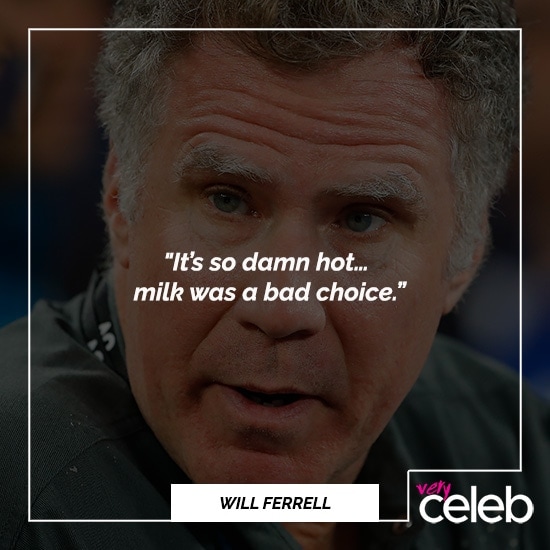 41. “By the time I was ready for college, I didn’t know what I wanted to do. I think I secretly wanted a show business career, but I was suppressing it.”
42. “I know the nature of comedy, and you never know what will happen with the next movie or whether people will find it funny.”
43. “I passed through the seven levels of the Candy Cane forest, through the sea of swirly twirly gumdrops, and then I walked through the Lincoln Tunnel.”
44. “I’m a Cancer; I’m music-passionate. I like long walks on the beach.” 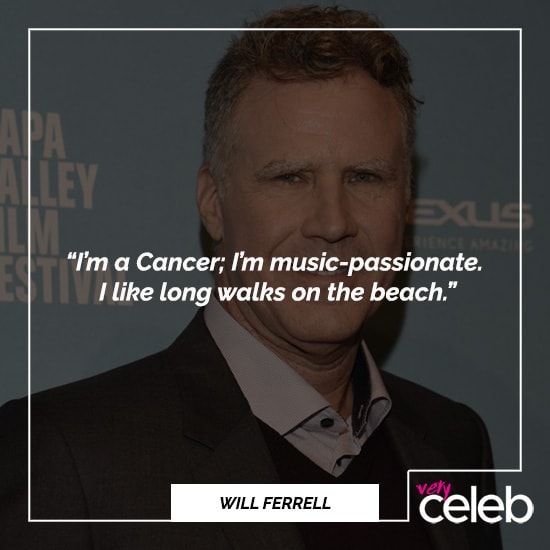 45. “I remember going with my mom to a random garage sale as a kid and thinking what a cool treasure hunt that whole world was. Only to transition as an adult to think, ‘What a gross place that really is.’”
46. “I speak as much Spanish as anyone who has grown up in Southern California or Texas or Arizona. I had my three years of high-school Spanish and a couple of semesters in college.”
47. “I still regret that I never played soccer in high school. I chose basketball over soccer.”
48. “I think anyone who has, you know, is in any sort of artistic pursuit, kind of goes up and down with the way they feel about their work. And I, for the most part, am a pretty happy person. But, yeah. I go through definite periods of time where I’m not funny. I’m not good. I’m – I don’t feel original.”
49. “I’ve always wanted to sail around the world in a handmade boat, and I built a boat.”
50. “There’s always going to be someone as funny as you or funnier.” 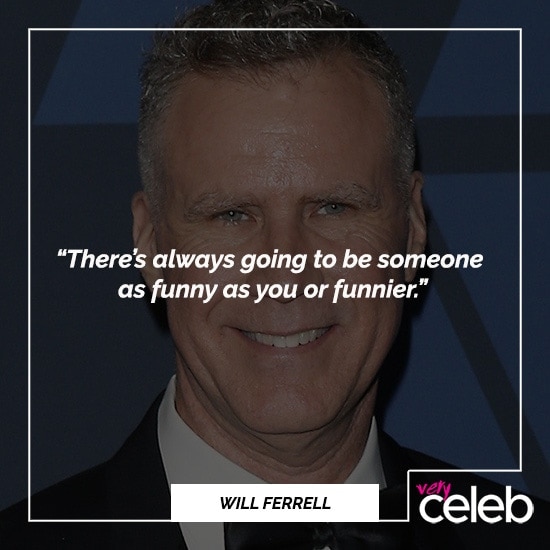