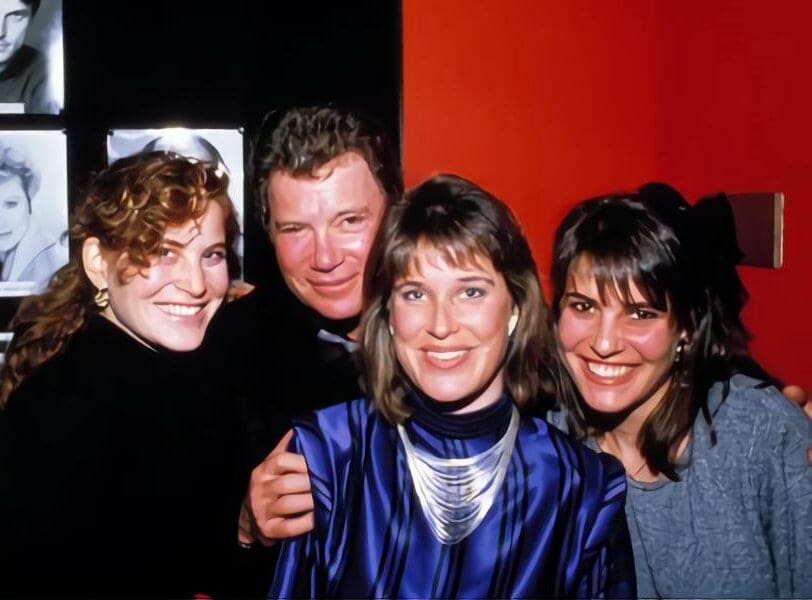 ☰ Questions & Answers show
1 Just how big is the Shatner family?!
2 William Shatner’s Daughters Photo Gallery
3 Who is the eldest of the three girls?
4 Is Lisabeth the favorite daughter?
5 Melanie – the baby of the family

Just how big is the Shatner family?!

There seems to be some confusion out there regarding William Shatner’s real-life daughters. To clarify this confusion, Shatner does indeed have three daughters and they are Leslie, Lisabeth, and Melanie Shatner.

William Shatner is a Canadian actor and singer whose name has been huge in Hollywood for decades now. He is also a well-known director, producer, screenwriter, and author. This multi-talented guy started performing in 1954 and has had numerous theater and film roles since then. Shatner is especially famous for his role as the brave and apparently irresistibly attractive Captain James T. Kirk in the 1966-1969 Star Trek series, renowned for finishing almost every show with his skin-tight top ripped seductively.

Shatner has been married four times but only had children, his three beautiful daughters, with his first wife, Canadian actress Gloria Rand.

Some people have mistakenly thought Kaley Cuoco of Big Bang Theory as one of his real-life daughter’s though. However, she just played the role of daughter to Shatner’s character in the Priceline commercials and is no relation to him.

Shatner has said during his many interviews how proud he is of his daughters, and has praised them for creating such beautiful families of their own:

“They have turned out to be three of the greatest mothers,” he is reported to have said many times,  “I’m always worried about whether I’ve done a good job as a parent. They have brought their family up in the way I wish I’d brought them up. So something good must have happened!”

Who is the eldest of the three girls?

Following in her father’s illustrious footsteps, a very young Leslie played an Only girl, opposite her father, in an episode of Star Trek: The Original Series. However, once grown up, Leslie found her talents lay elsewhere and she trained as an occupational therapist. She currently has her own very successful practice in Laguna Hills, CA.

She is married to Gordon Walker, with whom she has two sons – Grant and Eric.

Is Lisabeth the favorite daughter?

Lisabeth is the middle daughter of William Shatner and Gloria Rand. Born on June 6, 1961, she is currently 61 years old.

Spending her time in West Hollywood, California, she is an actress. A regular member of Boston Legal‘s cast, she has also appeared in Star Trek: The Original Series – obviously runs in the family 😂😂😂, and the video for the Huey Lewis and the News hit Do You Believe in Love. Multitalented, Lisabeth also adds writing to her list of talents, creating episodes for TekWar and T.J. Hooker. The latter being the 1980s cop drama, staring … yes, you guessed it …dear old daddykins Shatner! While TekWar … what can we say?!

Lisabeth is married to Andy Clement, tying the knot in 2005.

Melanie – the baby of the family

Melanie, like father and big sis, Lisabeth (but with less nepotism), has caught the acting bug. Although she made her debut in Star Trek IV: The Voyage Home, she has at least stretched her wings with roles in Knots Landing, Dark Justice, Madison, and Mercy Point.

Born in August 1964, making her 58, she married Joel Gretsch in 1999. The couple have two daughters – Kaya and Willow and live in Los Angeles.

Who are Brooke Shields’ Daughters?